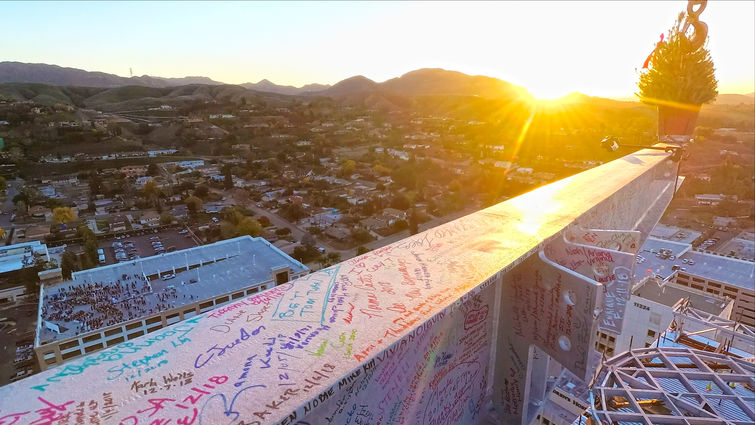 The ceremonial final steel beam was placed on top of the adult tower as part of the helipad ramp. Lifted and then lowered into place by a crane, the beam was traditionally adorned with an evergreen tree on one side and the American flag on the other. Heinrich spoke of the significance of those two items at the ceremony, saying the tree stood as a symbol of hope and prosperity for future occupants, and the flag represented the pride and care invested into the project by those who’ve worked on its construction.

The 16-story steel frame of the new Medical Center tower is the tallest building in San Bernardino County. Sharing a common pedestal of five stories, it is parallel to the new Children’s Hospital tower, which, standing at nine stories tall, was topped off in September. Combined, the two towers share approximately 25 thousand tons of steel.

Groundbreaking for the new facilities took place in May 2016, with the first piece of steel being placed in December 2017. McCarthy Building Companies, the general contractor, took on the construction project at the beginning of its conception. In early November, they began the interior construction phase of the new Children’s Hospital tower.

The new Medical Center will house 320 beds for adult patients, while the new Children’s tower will give Children’s Hospital a total of 373 licensed beds. The new facilities will also be a place where 4,700 Loma Linda University students and 700 residents will progress in their education. Nearby, the current Medical Center services nearly half a million patients annually.

Construction of the new facilities was announced in 2014 as a part of Vision 2020 – The Campaign for a Whole Tomorrow, the organization’s largest philanthropic endeavor in its 110-year history, which to date has raised more than $300 million.