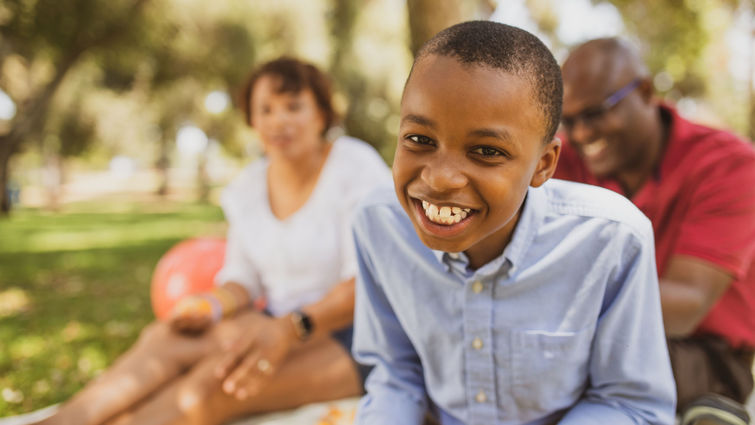 Nolan Brandy enjoyed a day in the park while his mom and dad, Rachel and Leon, watched on.

On April 10, 2017, a man targeting his estranged wife, a special education teacher, opened fire in the classroom where she taught at North Park Elementary School in San Bernardino, California, killing her and an 8-year-old student who had been standing behind her.

Nine-year-old Nolan Brandy was also shot, but was saved after he was rushed to the emergency department at Loma Linda University Children’s Hospital where a dedicated trauma team fought tirelessly to save his life. Nolan suffered a gunshot wound to the upper right quadrant of his abdomen.

According to pediatric trauma surgeon Don Moores, MD, a CT scan allowed Nolan’s medical team to track the path of the bullet, which lacerated a portion of the liver and kidney, and broke two ribs, but, thankfully, missed his lungs.

“Nolan was lucky,” Moores said. “If the bullet had entered inches to the right it could have hit major vascular structures and he could have bled to death. Inches lower and the bullet would have impacted the intestines or duodenum, which would have required an intense surgery.”

Luckily, Nolan did not endure any major internal bleeding, and his injuries were closely monitored and successfully managed nonoperatively with IV fluids.

Having recovered much better than anyone could have expected, Nolan was well enough to go home after just five days in the hospital.

If the bullet had entered inches to the right it could have hit major vascular structures and he could have bled to death. Dr. Don Moores

Full recovery from his injuries took about six weeks, and Nolan was quick to get back on the playground, riding his bike, his scooter, and running around with his dog, Penelope, who was welcomed into the family shortly after the incident.

According to Nolan’s dad, Leon Brandy, Penelope has helped with his recovery.

“Nolan loves Penelope so much we have to control the affection,” Leon says.

Nolan’s mom, Rachel Brandy, boasts of the care her son received at the hospital, specifically touting the ICU nurses who doted over her son day in and day out. “They were trying to protect him,” she says. “I appreciate everything they did to keep him safe.”

Now 11, Nolan and his family are making strides toward the life he had prior to that traumatic spring day. Albeit challenging, Rachel says keeping him close to family keeps him grounded.

“Life is different,” says Rachel, who attends weekly counseling sessions with her son. “But he is loved on every day with extra attention, love and protection.”

Nolan, who was in fourth grade when he was shot, did not immediately return to school despite being physically able. He was, however, able to begin home studies, and by the end of the summer he was ready to begin the fifth grade at North Park in fall 2017.

Rachel says Nolan, her youngest son, “her baby,” likes school, but it’s different for him. “We are working our way back to how it was,” she says.

Loud noises like fireworks or thunder make him scared and apprehensive, but each day is better than the one before.

Rachel is thankful they’ve gotten this far. She attributes her son’s recovery not only to the healing power of Children’s Hospital but to God as well. A Seventh-day Adventist, Rachel says her faith is strong. After a visit from her pastor while Nolan was in the hospital, she felt comforted knowing that people were praying for him.

“To have our family, the church and everyone at the hospital supporting us was encouraging during such a bad situation,” she says.