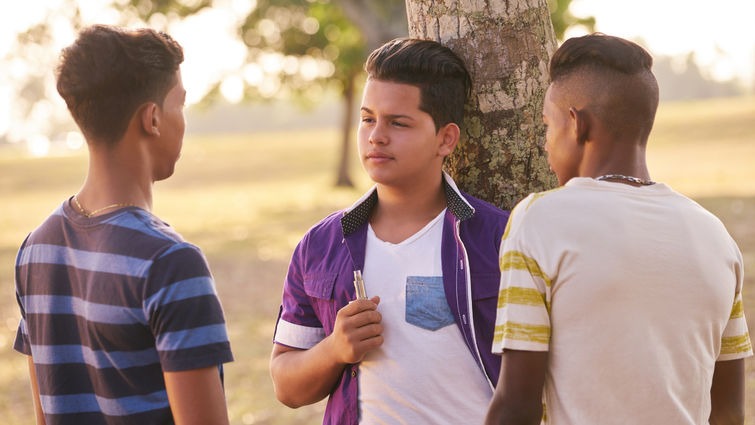 The rapid rise in electronic cigarettes use by teenagers has caused the United States Food and Drug Administration to consider banning selling the devices to minors, raising the concern of safety for young users. There is still a need for research to better understand the adverse effects these devices have on the body, but many studies have already shown numerous long-term, avoidable health risks.

Earlier this week, more than 1,000 businesses involved in selling e-cigarettes across the U.S. began receiving warning letters from the FDA cautioning them to stop selling to minors, a move that intends to hinder what the FDA is calling an epidemic.

Electronic cigarettes — known as e-cigarettes — are battery-operated devices that produce an aerosol by heating a liquid that usually contains nicotine — the addictive drug in regular cigarettes, cigars, and other tobacco products, according to the Centers for Disease Control and Prevention (CDC).

This epidemic holds the potential to cause serious health problems to both young and mature users, says Laren Tan, MD, a pulmonologist and asthmatologist at Loma Linda University Health.

“The damage caused by e-cigarettes, both in minors and adults, can pose health risks that can instigate long-term harm,” Tan says.

E-cigarettes come in many forms, some resembling traditional tobacco cigarettes, and some imitating everyday items such as pens or USBs. “These devices are not regulated, so it is unknown whether the size of the device greatly impacts the degree of the vapor consumed,” Tan says.

Because of this lack of regulation and being relatively new to the market — 2006 in Europe and 2007 in USA — Tan says the conclusive evidence needed is still being collected.Tan says there is currently a shortage of information on the devices. Although the data is still out on many independent studies, is it thought by some users that e-cigarettes may not be as harmful as regular cigarettes. However, they are still very unhealthy to the lungs, Tan says.

“Often, what makes it harmful to the youth is the nicotine component,” Tan says. “What we’ve know, and what multiple studies have shown, is that nicotine to minors harms their brain development, which is detrimental.”

Marketing of these nicotine delivery systems is often viewed as targeted at a younger demographic, with flavors such as bubblegum or cotton candy. While the flavors themselves do not pose a threat by ingesting, Tan says inhalation can have adverse effects.

“We know that certain e-cigarette flavorings contain diacetyl, a chemical linked to a serious lung disease. Inhalation of diacetyl causes inflammation, irritation, and can lead to permanent lung damage.”

A recent publication by the CDC noted that the metal component necessary for e-cigarettes to work — which heats up the liquid and changes to a vapor state — release small particles of metal along with the vapor. These metal particles are usually from heavy metals, such as nickel, tin or lead. When inhaled, these metals damage lung tissue and lower the body’s natural resistance to infections and cancers, according to the CDC.

The vape from e-cigarettes is a cool-temperature vapor which does not require combustion. As such, users are able to take deeper breaths when inhaling the substance, causing them to inhale greater amounts of nicotine, along with the particles of metal that come from the heating device.

“The plume of smoke caused by vaping is substantially larger than one of smoke caused by cigarettes, leading us to believe that even more nicotine is being consumed per puff,” Tan says. Because the smoke from cigarettes is due to combustion, the user is not able to inhale as great an amount due to toxic chemicals produced from the combustion process.

Tan says the airways constrict when exposed to the heated smoke, limiting the amount that can be breathed into the lungs. “This cool vape, laced with mental particles, nicotine and carcinogens, are going deeper into the lungs. For the developing youth, this can be extremely detrimental to both short-term and long-term health.”

The use of vaporizers can be a gateway for teens to start smoking regular cigarettes, say officials from the American Thoracic Society. Also, young people who become initiated to nicotine addiction with these devices are more likely to go on to use of other tobacco products. Tan says smoking can be more harmful to younger people because their bodies are still developing. “Lungs are still developing until the early to mid-20s,” Tan says.

Another daunting concern is that companies selling these e-cigarette products are not FDA approved and are therefore not required to meet any FDA regulations. “If young teens are addicted early in life to vaping, especially flavored vapes with diacetyl, they are likely to set themselves up for the formation or worsening of chronic respiratory problems,” Tan says. Without regulations and requirements, there are less systems in place to protect the consumer.

He says nearly 10 percent of his patients come in saying they are e-cigarette smokers. “These patients present with breathlessness, cough and wheezing. Some of them already have underlying chronic obstructive pulmonary disease (COPD), asthma or other chronic respiratory condition,” Tan says.

“We’ve found that for some, e-cigarettes were the reason why it was difficult to control their respiratory symptoms.”

Tan says those consistently coughing, who have greater mucus production, or issues with breathing might be showing signs of a lung injury. These symptoms can also worsen underlying respiratory problems. ‘Those that are experiencing these symptoms while smoking e-cigarettes should stop immediately and be checked out by your physician, who can determine if testing or more specialized care is necessary.”

If you are interested in learning more about how you or a loved one can receive treatment for respiratory problems, or other health problems, schedule an appointment with a primary care doctor online, through MyChart or by calling 909-558-6600. Additionally, you may contact Loma Linda University Comprehensive Program for Obstructive Airway Diseases at 909-558-8097.