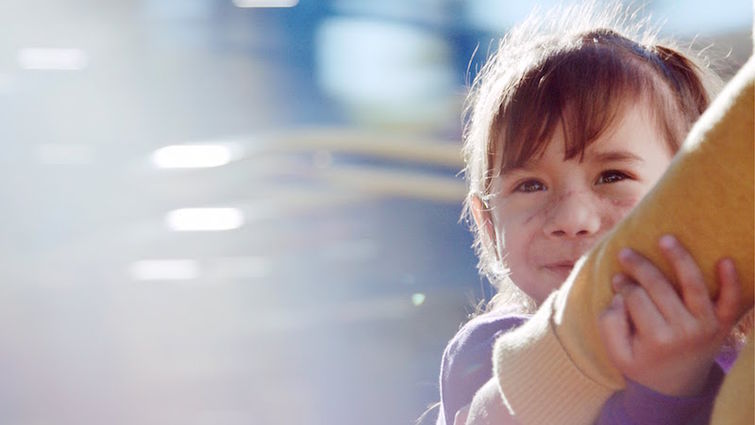 A team of specialized surgeons successfully re-implanted a portion of Mariah’s face after she was attacked by a dog.

The incident occurred in August last year. The dog had removed a large portion of her face – from the top of her nose to the top of her lip, including part of her left cheek. Her story was shared at the 23rd annual Loma Linda University Children’s Hospital Foundation Gala, presented by Hard Rock Hotel Palm Springs, on Feb. 11.

Mariah Salomon was airlifted from a Coachella Valley hospital to LLUCH where a team of specialists, including otolaryngologists Drs. Nathaniel Peterson and Paul Walker, acted immediately to develop a plan to re-implant Mariah’s face.

While not knowing if it would be successful, the doctors knew that attempting to re-implant Mariah’s face was their only chance at giving her a bright future. They simply had to hope for the best and risk putting her under anesthesia, despite extensive blood loss caused by the initial injury.

“This was something that had to be completed in a matter of hours,” said Dr. Alfred Simental, chair, otolaryngology/head neck surgery.

The procedure, which took five hours of intensive work under a surgical microscope, is unprecedented for a patient so young.

Walker said the size of her facial injury was very unique. “Given her age, “ he said, “and the size of the evulsion of the patient, it was one of the largest evulsion injuries successfully re-implanted on a patient this young.”

Peterson and Walker worked together to put the arteries back together on each side. They assisted each other, which was key due to the size and difficulty. Post surgery, the team relied on leeches for a week to assist with blood flow until Mariah’s veins grew back.

The pediatric intensive care teams were also critical in keeping Mariah alive, keeping her on a ventilator to assist her breathing and replacing her blood volume many times over.

Three weeks after the accident Mariah was able to go home. Aside from some minimal scarring, Mariah is expected to have a full recovery and be able to have the life she was born to live.

“The nurse, doctors, everybody who helped her out – I’m very thankful for everything they did for her,” said Peña. “I think Loma Linda University Children’s Hospital is the best hospital any parent could ask for.”

While it is too early to tell if Mariah will get full sensation back, she is already beginning to get some movement back. Her sense of smell is intact, and she can eat and drink whatever she wants.

“Re-implanting Mariah’s facial tissue was probably the most intrinsically rewarding case we have ever done,” said Peterson.

The team hopes it will inspire other teams across the country to consider similar interventions.

Simental added, “This reminds us of the joy of why we went into medicine.”