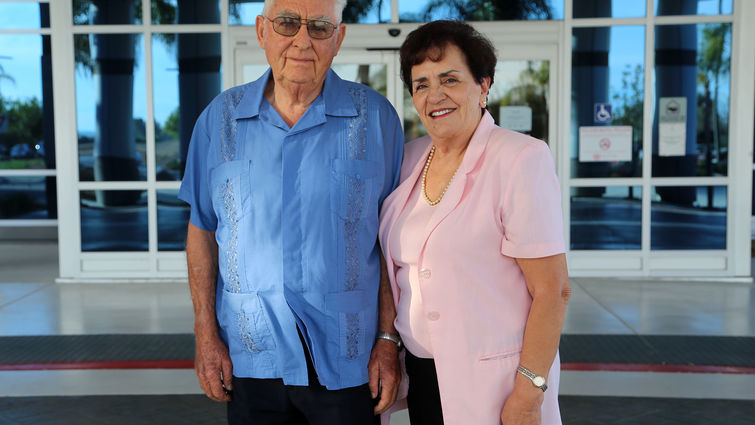 Ernie and Carmela Loelkes are grateful for the firemen, paramedics and staff members of Loma Linda University Hospital-Murrieta who saved her life.

Murrieta resident Carmela Rincon Loelkes is alive today thanks to life-saving procedures by firemen and paramedics in her home and an advanced surgical procedure now in use at Loma Linda University Medical Center – Murrieta.

On August 18, 2016, firefighters were summoned to her home where they performed chest compressions but couldn’t detect a pulse for 10 minutes. Her family was devastated by the news that she had apparently died, showing no signs of life.

A day earlier, Carmela was at home recuperating from reconstructive shoulder surgery. She told her husband, Ernie, that she felt uncomfortable and exhausted, but attributed it to the summer heat.

Carmela slept in the library of the Loelkes’ home that night and woke up late the next morning. She heard Olga, a family friend, in the kitchen. Carmela decided to get up and have breakfast, but when she tried, she felt terribly dizzy. She sat down on the sofa and cried out for help.

Her husband, Ernie, was in the shower and couldn’t hear her calls, which soon escalated into screams. Olga, however, came running. Moments later, she ran to the back of the house to summon Ernie, who promptly called 911.

Carmela told her husband she was having terrible pain while clutching her upper torso.

Ernie tried to comfort her until the firemen arrived about nine minutes later. When they did, Carmela passed out. “I basically gave up. I don’t remember anything after that,” she says.

Ten agonizing minutes later, the firefighters gave Ernie the news he didn’t want to hear—that his wife had died. Ernie, in turn, shared the news with his son: “Your mother is gone.”

But Ernie also remembers the amazing sequence of events that happened when the paramedics arrived and assessed the situation. After a short briefing by the firefighters, the paramedics hooked Carmela up to a monitor and ordered the firefighters to resume the chest compressions. Unexpectedly they found a faint pulse.

Now the paramedics flew into action, lifting Carmela onto a gurney, wheeling her out the door, and loading her into an ambulance, telling Ernie and Olga they were taking her to the closest hospital.

While Ernie scrambled to take stock of the situation, the ambulance took off down the road and vanished from sight.

A short time later, his phone rang. This time, the paramedics said there had been a change in plans. They were taking Carmela instead to Loma Linda University Medical Center – Murrieta.

Ernie wondered if Carmela was still alive and if she would ever regain consciousness.

As the ambulance pulled into the traffic circle at the Medical Center, Carmela suddenly regained consciousness. She says she remembers an incredulous paramedic telling her, “I couldn’t leave until I talked to you. Today, I had an experience I never had before. We brought you back after you were already gone.”

A physician explained to Ernie that Carmela had suffered a massive pulmonary embolism, or obstruction of blood to her lungs. Despite the fact that she had recovered inexplicably, the doctor insisted she wasn’t out of danger by any means. “We’re taking her in for emergency surgery,” he said. “She might make it, she might not. There are no guarantees.”

During the operation, surgeons used an innovative technology called EKOS™ Acoustic Pulse Thrombolysis™. The procedure dissolves vascular blood clots with deep-penetrating ultrasound that breaks them up and drives anti-clotting medication into lung tissues, where they dissolve the proteins that bind the clots together. The doctor explained that the procedure was relatively new, adding that small clots created by the breakup of larger ones posed a risk for triggering embolisms of their own.

He went on to note, however, that without the intervention, Carmela was in imminent danger of a relapse, which could prove fatal. Moreover, the new technology offered several desirable advantages which would hopefully work in her favor. They included shorter dissolution times for the blood clots to break up, reduced risk of bleeding and other complications, substantial reductions in drug dosages compared to conventional therapies and superior drug absorption and clearance of the deadly clots.

The next morning, doctors took her in for a second procedure on her other lung. They reiterated to Ernie that her condition was very grave and had him sign another consent form acknowledging that she might not survive. They also said that not performing the procedure would place her at even greater risk.

Once again, the members of Carmela’s large and loving family prayed earnestly.

Fast-forward a year and three months to November 2017, and Carmela and Ernie are sitting in the board room at Loma Linda University Medical Center – Murrieta. An animated Carmela, looking robust and healthy, is expressing her thanks to God, to the firefighters and paramedics and the physicians and other care providers at the Medical Center for performing the two procedures that gave her back her life.

Before they leave, however, Ernie has an observation of his own. “I think the paramedics knew you had that machine right here,” he says. “If you hadn’t, my wife wouldn’t be alive today!”