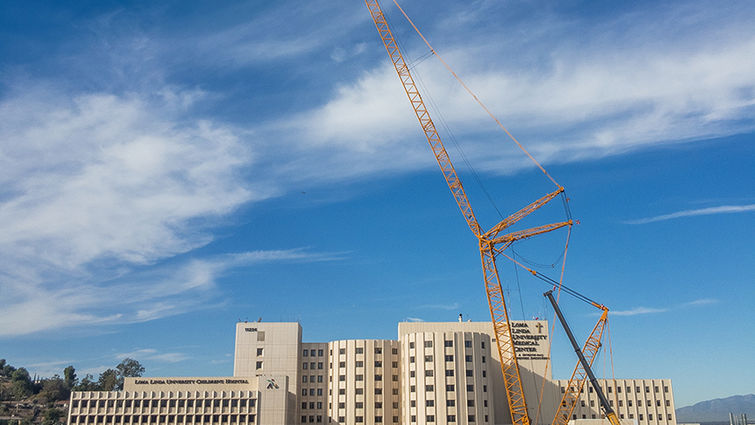 Loma Linda University Health’s effort to construct a new adult hospital and new Children’s Hospital tower has entered a new phase with the delivery of two massive construction cranes to the building site.

The cranes were delivered in late November, with 57 trucks needed for the taller south side crane, and 27 trucks to deliver the north side crane. On-site assembly took roughly a week. With the cranes’ arrival and placement, work on the new hospital site switches from excavation and seismic safety installation to the start of building the planned 16 story hospital. Once completed, the new adult hospital tower will be the tallest building in San Bernardino County.

When fully extended, the taller south side crane will stand 400 feet tall. The cranes have a lift capacity of 826 tons (or approximately 1.65 million pounds). For perspective, that capacity is equivalent to lifting four blue whales at the same time, or 118,000 bowling balls. This impressive lifting capacity requires 1 million pounds of counterweight to assure the crane’s stability throughout the construction effort. That amount of counterweight would be equal to 40 school buses, or 182 million US. pennies.

The two cranes are projected to be on site until November 2018. During the construction efforts, each crane will require a four-person crew: the operator, the oiler/mechanic, the signaler, and the loader.

The first piece of steel was placed on the site December 6. To complete the building’s A level, which will fill the excavated area and bring the building to ground level, will require 5,000-6,000 tons of steel. Most of A level, where the largest pieces of steel will be placed, will be bolted together rather than welded. Workers will need to drill 40,000 holes during A level construction, equivalent to drilling through five miles of steel plate thickness.

When the 16th floor of the adult hospital is reached, the structural frame will consist of more than 25,000 tons of steel. Steel is being fabricated in three plants in Arizona and one in Wisconsin, and being trucked to Loma Linda. Once here, placing, bolting, welding and other processes will require roughly 200,000 hours of construction time.

Loma Linda University Health’s decision to construct new facilities arose from the rapidly changing governmental seismic standards and the growing health care needs of the Inland Empire region. The new, state-of-the-art adult hospital and Children’s Hospital expansion will anchor the health care needs of our vast Southern California region, as well as be a hub for education and research that continues to shape health care in the United States and around the world.

The new hospital towers are the most visible aspect of Vision 2020 – The Campaign for a Whole Tomorrow. Vision 2020 is a $360-million comprehensive philanthropic initiative, the largest in the history of Loma Linda University Health. The effort also represents the largest investment in health care and education in the Inland Empire.

The Vision 2020 campaign supports priorities in: