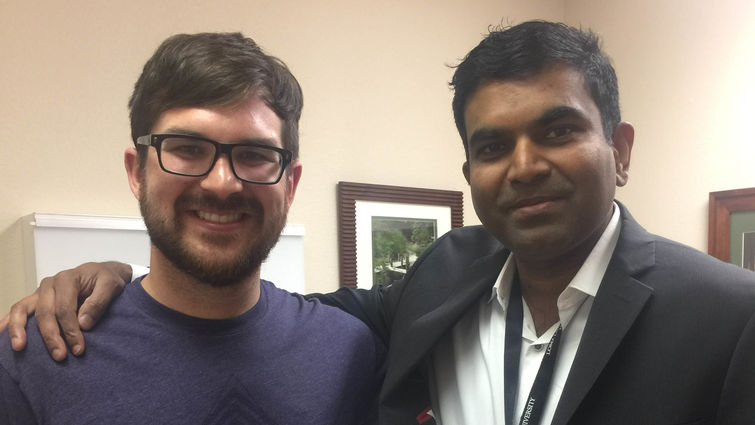 David Blasy, a clinical behavioral therapist in Riverside County, recently thanked and recognized the Loma Linda University Health caregivers — a family nurse practitioner and a neurosurgeon — who saved his life.

David remembers how the turning point in his life played out – he had a feeling that something was wrong when he felt nauseated and dizzy after doing a few push-ups during a break at work in Desert Hot Springs. He stood up, hoping the pain would ebb, but instead, he began to experience a severe headache.

David called his wife, Ally Blasy, to tell her he might be experiencing a migraine. He then drove 70 miles home, hoping that lying down or taking some headache medication would help the pain. Nothing helped, so he went to the Urgent Care Department at Loma Linda University Medical Center — East Campus. At urgent care, he was seen by Jessica Fields, MSN, a family nurse practitioner.

David explained how he was experiencing a sharp pain that traveled up his neck to right temple as he did pushups, Fields said. David was showing no signs of a stroke — no slurred speech, no neuro deficits; no drooping of his face. He even told her he thought he might have strained or sprained a muscle in his neck, but she couldn’t shake the feeling that it might be more.

“Your gut sometimes tells you there is a reason to be concerned,” she said. "As David described the nausea and chills that he was experiencing, I thought, ‘this is not normal,’” Fields said. “I thought — ‘he needs a CT.’”

But there was a problem. The Urgent Care Department at Loma Linda University Medical Center East Campus closes at 8 p.m., and CT scans aren’t ordered after 7 p.m., Fields said. Although she knew there was a possibility of it being nothing, Fields knew she wouldn’t be able to sleep that night if David didn’t have a CT that evening, she said.

She went to the attending physician on duty, telling him that she was concerned David may be experiencing a bleed. He agreed — and David was transported by ambulance to the Loma Linda University Medical Center (LLUMC) emergency department.

The transfer to LLUMC was followed by a CT scan, which led to the diagnosis—a bleed on the right side of his head caused by an arteriovenous malformation (AVM), a tangle of abnormal blood vessels.

Blasy first received treatment to slow the bleeding, followed by surgery to remove the AVM. Promod Pillai, MBBS, director of endovascular and cerebrovascular neurosurgery for the department of neurological surgery at Loma Linda University Health, performed the successful operation. After just six weeks of recovery, Blasy returned to work. He is experiencing no long-term effects, he said, and is continuing his active lifestyle—including walking and running every day.

David, a young professional, had experienced no symptoms when all of a sudden, he was in the hospital for a bleed in his brain, Pillai said. “Situations like this can be scary for the family. The patient was fine yesterday and today is at great risk,” he said. David chose to honor Pillai through the Healing Hands grateful patient program because of the confidence he felt in him, he said.

“Dr. Pillai has a great bedside manner, and his visits boosted my morale,” David said. “Ally and I also appreciated the care he took as he explained things to us—I can’t speak enough about the wonderful care he provided.”

Pillai considers his patients as members of his own family. “Surgery can make immediate and long-term differences in patients’ lives and the lives of their families. There is no better place than Loma Linda to come with an issue like David experienced. We have every option to care for these patients.” LLUMC is the first certified Comprehensive Stroke Center in the Inland Empire, a designation that reinforces the evidence that LLUMC delivers the most advanced stroke care when timing is most critical. “Situations such as David’s are difficult for the entire family, and it is fulfilling when they appreciate what we do,” Pillai said.

Fields was also recognized for her extraordinary care on November 13th, 2017. Of the recognition, she said, “I am so humbled. I'm so grateful I was able to be of service to David that day and all those that come into the Urgent Care on a daily basis. It really is a team effort and I have been privileged to work with some great team members over my five years in the Urgent Care.”

The Healing Hands program at Loma Linda University Health enables patients and their families to give a gift of any amount (and direct it to any area they would like to support throughout the organization), along with a note to the caregiver, honoring them for their exceptional care. 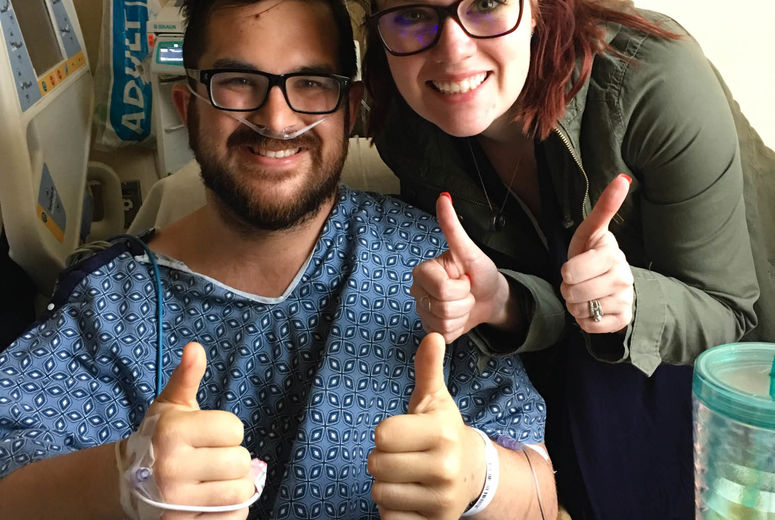 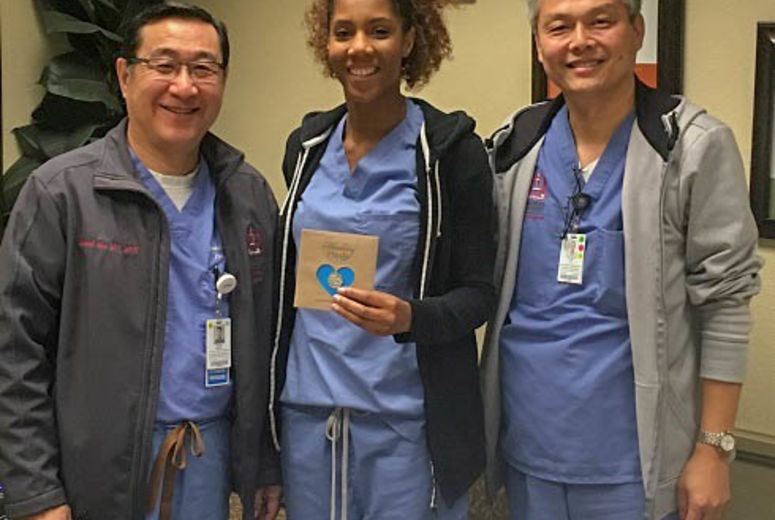 Jessica Fields was recognized for her extraordinary care by grateful patient.