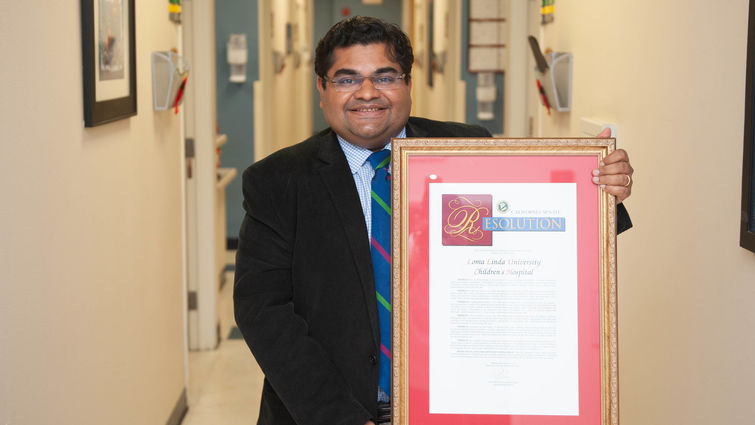 Loma Linda University Children’s Hospital sickle cell treatment program has been awarded network affiliation with a national consortium, making it one of less than 30 such centers in the United States with a unified mission to improve the care of individuals with sickle cell disease (SCD).

The National Alliance for Sickle Cell Centers identify SCD Centers of Excellence that have the essential components needed to provide full spectrum disease care in their respective geographic regions. The association aims to unify sickle cell centers in their effort to improve access and advance research to cure this painful and deadly disease. A NASCC center has the ability to prescribe all of the available disease-modifying therapies for sickle cell disease.

The designation follows this month’s recognition from the California state senate for the hospital’s establishment of the comprehensive sickle cell treatment center, which was launched in 2017. Loma Linda University Children’s Hospital now treats some 300 patients with the condition each year, and doctors have used stem cell therapy to cure more than a dozen sickle cell patients of the genetic disease.

“I am honored to be part of helping create a paradigm shift in providing the attention and respect that this group of society and patients deserve,” Jain said. “We are able to keep our patients out of hospitals and in schools — and they can have a shot at a normal life. It’s extremely satisfying.”

National affiliation has enabled Jain and his staff to participate in large research studies: one is examining the natural history of sickle cell disease, specifically the trait, which is often ignored as a recognized health ailment, and how to end organ damage in patients living with the disease.

Children’s Hospital’s sickle cell treatment program serves a catchment area of approximately 75,000 square miles, which includes much of Southeastern California, southern Nevada, and most of Arizona. Many patients further away in this area have moved near Loma Linda to establish regular care, Jain says.

Sickle cell disease can cause extraordinary pain, second only to the pain felt in childbirth, Jain says. The disease causes bone marrow to produce mostly ineffective red blood cells, cutting off oxygen to the body. When a bone starts to die because of lack of oxygen, it causes severe pain.

“Imagine a two-year-old going through that pain every single day until they die. It’s horrible,” Jain says.

Roughly 1,000 babies are born with the disease each year in the United States, according to the Sickle Cell Disease Association of America.

The disease largely affects African Americans. Jain says 1 in 7 Black adults are carriers of the condition, and two people who are carriers becoming parents are likely to have a child with sickle cell disease.

Jain came to establish the program at Loma Linda five years ago after conducting similar work in New York, bringing comprehensive treatment to a sorely needed spot in California. Of his 300 patients at the Children’s Hospital, some 85% are Black, and 15% are Hispanic. Jain says the Inland Empire was the second-highest population center with sickle cell disease in the state when he arrived at Loma Linda.

Beyond the hospital, he frequently spoke to community groups to bring about change in how other providers and community members throughout the region accommodate and treat those living with sickle cell disease. Opioids are often the prescribed treatment for the disease’s severe pain outbreaks, yet providers in emergency departments and clinics were often wary of teenagers asking for painkillers, fearing they were merely seeking recreational drugs. Since arriving at Loma Linda, Jain has delivered roughly 10 lectures a year at various organizations — hospitals, urgent care clinics, physician groups, schools, and churches — so he could help change mindsets.

“It took me five years to change the mentality and thought processes of providers in our community,” Jain says.

“I’ve always wanted to live a life of significance, and I think I’ve found that life in work of this niche that has been created by God,” Jain said.