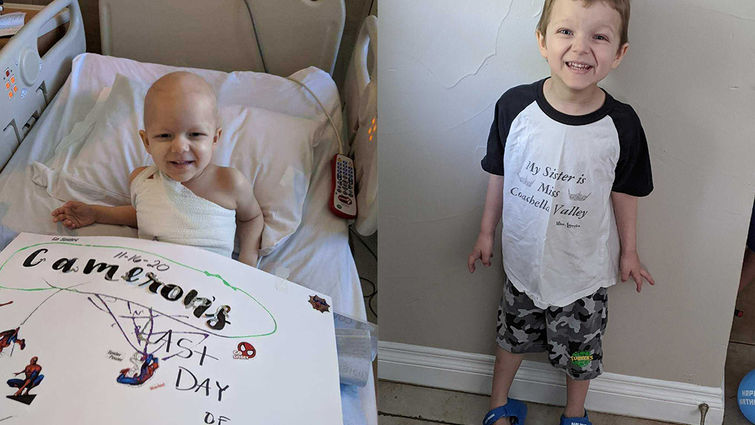 From the moment four-year-old Cameron Bryant was diagnosed with Medulloblastoma, a tumor located in his brain, mom Alyssia Parks-Bryant learned an important lesson. The best ways Parks-Bryant and her family would cope with having a child fighting cancer would be to lean on faith and take things one minute at a time.

Cameron’s health became a concern when he began vomiting without cause in February 2020. His pediatrician wasn’t able to identify the issue. Cameron became dehydrated and was not able to focus his eyes, says Parks-Bryant. They took Cameron to Loma Linda University Children’s Hospital one evening in June 2020, the resident physician examining Cameron immediately knew something was wrong. After running a CT scan, Cameron’s family was told the scan had shown a mass.

“I didn’t hear anything after that,” Parks-Bryant says. “I was in shock. When neurology came to take him to the pediatric intensive care unit, I was terrified they were taking him somewhere to die. I kept saying ‘no, he’s not dying, he fine,’” she recalls.

Parks-Bryant says all the doctors and nurses she came into contact with that night took time to answer her questions and explain things to her over and over if she needed.

Cameron underwent a craniotomy to remove the tumor, performed by Richard Robison, MD, a Children’s Hospital pediatric neurosurgeon. Removing tumors in the posterior fossa of the brain can damage attached healthy brain tissue, causing posterior fossa syndrome in 25 percent of children. This syndrome impacts ability and processes of speech, emotions, movement and other behaviors.

“Cameron had none of that,” Parks-Bryant says. “With Dr. Robison’s skilled hands, the Lord provided a perfect surgery, and the entire tumor was removed.”

Pathology reports on the Cameron’s tumor classified it as high risk, leading to his transfer to the oncology ward where his battle would continue for the next six months. Cameron was enrolled in a clinical trial and began rounds of chemotherapy. Due to complications with his body’s reaction to the chemo, Cameron remained as an inpatient in the hospital throughout his treatment. After his rounds of chemo, an MRI scan showed no substantial growth of the cancer. He then underwent an autologous stem cell transplant procedure, where healthy stem cells previously collected from his body and stored before his chemo were put back into his body to replace the diseased and damaged stem cells.

On December 2020, Cameron rang the bell in the Children’s Hospital oncology ward, signifying the end of his cancer treatment.

“That was a wonderful day,” Parks-Bryant says. “His MRI scans at one month, three months and six months post-treatment have been clear. We are very hopeful that his most recent scans will also be clear.”

Parks-Bryant says she and her family are thankful. “We love Loma Linda,” she says. “Unit 4800 literally became our home away from home. Every time we go in for scans, we get ‘lost’ so Cameron can find that unit along the way. He sees his friends, from Child Life to the nurses. They were our angels.”

Parks-Bryant encourages other parents facing a cancer diagnosis in their child to understand they are not alone and will learn to accept help. “There is only so much you can handle,” she says. “If you’re focusing on just getting through each breath and the breath of your child who’s being treated, take the help that people are offering — from childcare assistance, grocery assistance, to bringing you a meal. Focus on getting through things one minute at a time.”