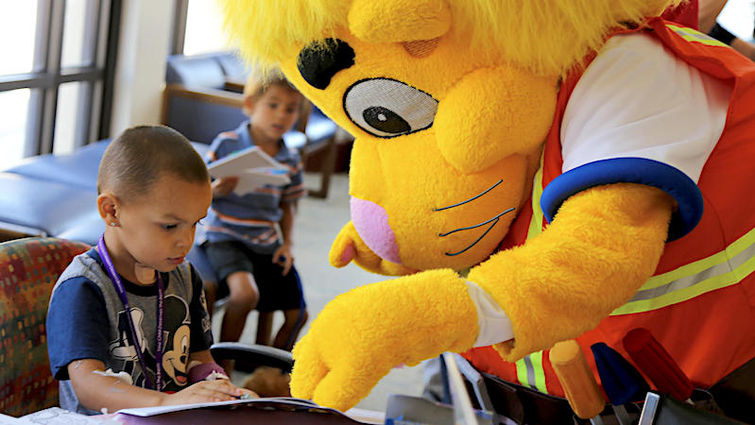 LLUCH patient, Felix Rodriguez, 3, of San Bernardino got a little help from Luke the Lion with his crafts during the furry mascot’s birthday bash in the hospital lobby, Monday, June 19.

The Loma Linda University Children’s Hospital (LLUCH) lobby was filled with birthday fun this week as the honorable mascot Luke the Lion celebrated another birthday.

The Big Hearts for Little Hearts Loma Linda Guild treated LLUCH patients and their families to an afternoon of crafts, entertainment and even birthday cake on Monday, June 19.

Guild member and longtime friend of LLUCH, Carol Troesh, has been dedicated to the annual event since its inception seven years ago.

“The entire month of June is Luke’s birthday month,” Troesh said. “This is truly a special event where kids can get out of their hospital room and forget for a minute about their treatment.”

In honor of his birthday, Luke gave gifts to patients, including each child in attendance got a stuffed lion and a book of their choosing to take home.

The Loma Linda Guild is committed to supporting the children hospitalized at LLUCH by developing programs and projects that address the critical needs of these children and their families. The Loma Linda Guild was the first and original chapter of Big Hearts for Little Hearts that formed in 1999. Since its inception, the guild has raised over $1.6 million for the hospital.