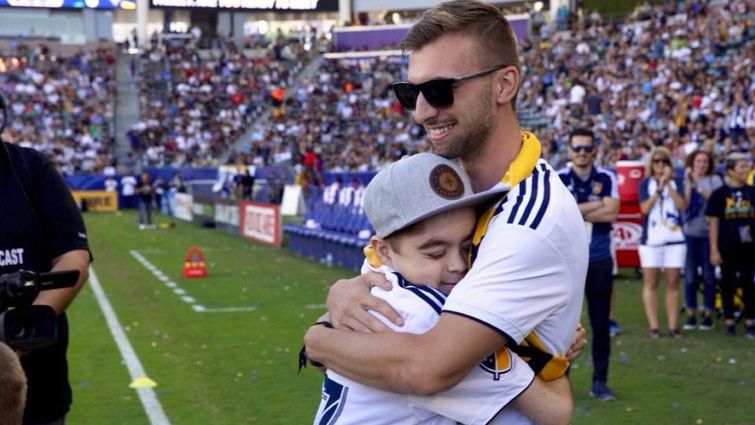 Ten-year-old Seth Akins last year got the miracle he and his family had been praying for — a lifesaving bone marrow transplant at Loma Linda University Children’s Hospital. A year later, on Sunday, Sept 23, 2018, the next best thing happened — Akins had the privilege of thanking his donor in person. The emotional introduction occurred during halftime at the LA Galaxy soccer game at Stub Hub Center in Carson, CA, and was made possible by the Gift of Life Marrow Registry.

I’m very happy and thankful that he did this for me. He saved my life. Seth Akins, 10

Akins greeted his donor, Aaron Allen, 23, of Long Beach with open arms on the soccer field in front of thousands of people.

“I’m very happy and thankful that he did this for me,” Akins said, “he saved my life.”

At the time of donation, Allen said all he knew was that his bone marrow was going to a 10-year-old boy in California, and the opportunity to donate to Akins has been one of the most life-changing experiences in his life.

“To meet him, to see him, to talk with him, and to see that he isn’t suffering anymore…” Allen said “it’s heartwarming and rewarding to know that I was a part of that.”

Under the terms of the bone marrow registry, patients are not allowed to meet their donors until at least one year after transplant.

Akins was diagnosed in January 2017 with A-plastic anemia — a rare condition in which the body stops producing enough new blood cells as a result of bone marrow damage. Under the care of a comprehensive pediatric specialty team, Akins underwent multiple chemo therapy treatments, which were unsuccessful. A bone marrow transplant was the next and only other option.

After his bone marrow transplant on June 29, 2017, Akins remained hospitalized in the pediatric intensive care unit (PICU) for 205 days due to complications. He acquired a severe TMA or thrombotic microangiopathy, a rare but severe disease that affects the kidneys and other vital organs.

His mom, Renee Floriano, said it’s because of Allen’s selfless donation and the dedicated care her son received that he is alive today.

“I am so thankful to Aaron and Loma Linda for manifesting this miracle,” Floriano said. “The prayer and love we received is more than we could have ever asked for.”

Akins still has one more year of home hospital before he can return to school, but he’s able to be outside more — something he was only able to do five times while in the PICU — and spend time with his two siblings at their Rancho Cucamonga home.

As for Allen, he said the process of donating his bone marrow was less painful and much easier than he had anticipated. Now an advocate for bone marrow transplant, he encourages everyone to become a part of the registry.

To learn more about bone marrow transplant or to become a part of the registry, call the pediatric bone marrow clinic at 909-651-1939.