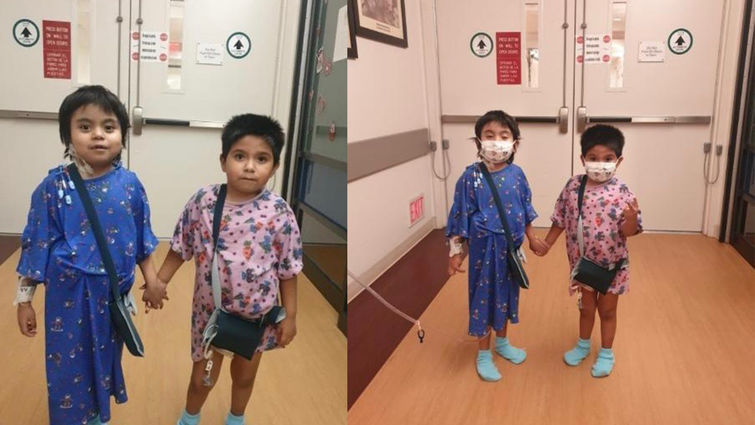 Levi Saldivar and Bryan Tinajero Cervantes have many things in common. They were born in Pomona, their birthdays are just over a month apart, they both needed dialysis and a kidney transplant from a young age, their kidneys came from the same donor, and they’re now best friends.

Levi was born in Pomona with advanced renal failure due to an obstruction in his urethra (or bladder outlet) while in the womb. He was transferred to Loma Linda University Children’s Hospital for care three weeks after birth. Immediately after his birth, Levi was started on dialysis for the foreseeable future.

His mother, Lidia Saldivar, says it was a difficult introduction to life for Levi.

“He’s never eaten food except through a gastrostomy tube,” she says. “He’s had many surgeries from birth until transplant.”

Bryan was born with both heart and kidney issues. He was transferred to Children’s Hospital soon after.  In January, Bryan was getting weaker. He was even struggling to walk. “Dialysis wasn’t helping,” says his mother, Maria Tinajero. “I was praying to God, if he was to stay in this world to heal him from any pain.”

When they got the call that there were kidneys for their sons, both Tinajero and Saldivar were in shock and overjoyed. Both families rushed to get their sons ready and go to the hospital. Both boys wore their favorite pajamas — which happened to be matching “Paw Patrol” pajamas.

Tinajero says the boys met in the waiting room and their friendship was spontaneous. Saldivar says they seem like they’ve been friends forever.

“Their friendship blossomed instantly,” Tinajero says. “They say their kidneys found each other, brough them to each other.”

Bryan and Levi received their kidney transplants on February 5, a few months before their sixth birthdays.

Tinajero says she loves Children’s Hospital because they treated both her and her son with respect. “Everyone is understanding,” she says. “I don’t know much English, but they still included me and respected me in conversations.”

Saldivar is grateful and excited for her son’s future. “We’re so grateful for that person who donated their kidneys, and we’re so grateful to Loma Linda,” Saldivar says. “All the nephrologists, dietitians, social workers, nurses, surgeons, the whole team at Loma Linda. He wouldn’t be here without them — they helped him live so long.”

“We call them medical twins because they got kidneys from the same deceased donor at the same time while both in our unit at nearly the same age,” Sheth says.

Sheth says that while kidney failure at birth in pediatric patients is not common, it does happen, forcing children to start dialysis at a young age. “Unfortunately, they end up with multiple associated medical problems because of needing dialysis so early on in life,” she says. Sometimes they have developmental delays, extended hospital stays slowing their normal socialization and social development, oral aversion, and an overall difficult medical journey, Sheth says.

The only way to get off dialysis is with a kidney transplant; after growing to a certain size so the organ fits properly into the abdomen and the blood vessels align. However, Sheth says pediatric patients on dialysis don’t grow well and often take a long time to get to the height and weight requirements.

She says the need for organ donors is growing. “Pediatric patients are waiting longer and longer to get kidneys due to our long waitlist,” she says. “There just aren’t enough donors. Clearly, organ donors make a big impact on people’s lives — these children are going to thrive compared to what they would have been on dialysis. The impact is a gift of life for the child and their whole family.”

While both Levi and Bryan are doing well with their new kidneys, Sheth says there is a limited lifespan for both kidneys from deceased donors as well as living related donors. Both boys may need another transplant in approximately 10 to 15 years.

Visit Donate Life California for more information on organ donation or sign up to become an organ donor.