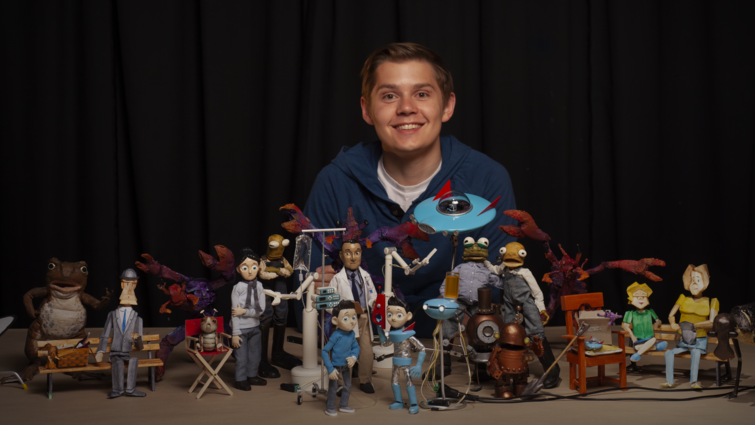 Blake recently graduated and is now working in animation. He said his victory against osteosarcoma and his time at Children’s Hospital sparked his imagination to inspire others.

Former patient Blake Derksen came back to Loma Linda University Children’s Hospital in 2019 to premier his stop motion film for patients, staff and physicians. Created to bring hope to kids, the film tells the story of a pediatric patient diagnosed with cancer and was inspired by his own battle with cancer.

Blake was a typical 16-year-old high schooler entering the final stretch of his sophomore year when he began having severe pain in his legs — he just thought they were shin splints. But when he left school that day, he had no idea how much his life was about to change.

His MRI showed a tumor on his left shin, but a biopsy was needed to identify the tumor. What physicians at Children's Hospital noticed was that something was eating away at Blake's bone and soft tissue.

Days later, doctors diagnosed him with osteosarcoma, a common type of bone cancer that occurs most often in teens. He would have to receive several months of inpatient, high-dose infusion treatments before major surgery on his leg.

While his diagnosis was daunting, Blake said he made peace with his condition. "At a certain point throughout this experience, I learned to just accept that life was going to be a little different for a while, and that was OK," Blake said. "It was scary, but I had to have faith that I would get through it."

Three months after his diagnosis, the surgery on Blake’s leg was a success — his tumor was removed, and his leg was strengthened with a rod and cadaver bone.

However, his journey was far from over — it was another six more months of infusion therapy, being in and out of the hospital, fighting near-constant nausea and ongoing pain, and learning to walk again after not being able to put weight on his leg for eight months.

He said his nurses and physicians, including Dr. Antranik Bedros, who was division chief of hematology and oncology at Children’s Hospital at the time, made unit 4800 feel like his home away from home. Through it all, Blake chose to remain positive and take the time to grow in other ways.

“I was aspiring to go to CalArts after high school and study animation,” Blake said. “Being in the hospital for so long gave me the time to develop my art practices.”

Not only did Blake fulfill his dream of attending CalArts, he recently graduated and is now working in animation. He said his victory against osteosarcoma and his time at Children’s Hospital sparked his imagination to inspire others.

“Near the end of my treatment, I had the idea to create a stop motion film about a pediatric patient diagnosed with cancer going through the same struggles I did and trying to find hope in that situation,” Blake said.

Blake said he wants to give others the same hope he found during his fight with cancer. “I don’t see life the same way anymore,” Blake said. “I’ve already stared death in the face. Every day I wake up is a great day.”