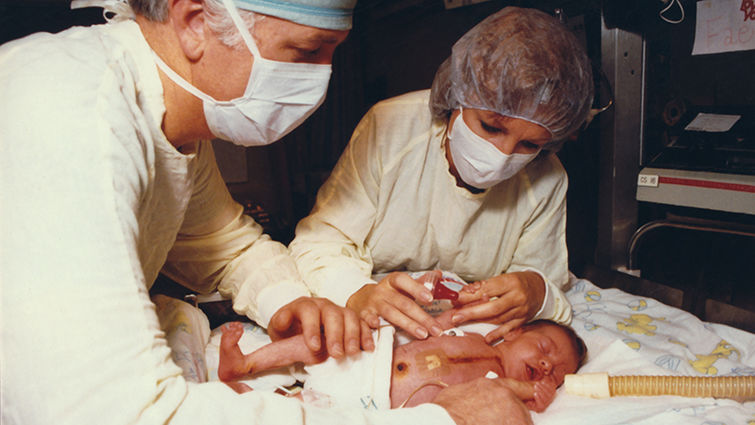 The following are editorial excerpts from the world media reacting to the Baby Fae surgery:

EDITORIAL: SENTINEL, Milwaukee, WI on October 29. “If Baby Fae’s parents gave the go-ahead for the transplant after dealing with these questions, the scruples and morals of others should be of no concern. Giving the child a chance is what really matters.”

EDITORIAL: TIMES-DISPATCH, Richmond, VA on October 30, “Is the right of a baboon to live a ripe old age of greater import than the right of a baby to live long enough to crawl, to toddle, and to say “mama.” We’re for laws that protect animals from cruel treatment. But when the choice is life itself, let’s put human rights first.”

EDITORIAL: TIMES, Huntsville, AL on October 30. “Those of us who don’t face such life-and-death situations in our daily lives ought to be a little slower to condemn those who much make those decisions and then live with the consequences.

EDITORIAL: LOS ANGELES TIMES, Los Angeles, CA on October 31: Medicine’s goal is to reduce suffering and preserve life. Baby Fae is on the frontier of that quest.”

EDITORIAL: TIMES, Corpus Christi, TX on November 1: “It is in the nature of technological and scientific change to generate a certain amount of discomfiture. There is hardly any advice that comes without some price, whether it be economic, ethical, or aesthetic…in the end, though, the most powerful argument in favor of such procedures remains within the walls of that California hospital. There, thanks to the skill and dedication of her surgeons, a tiny girl lives on. Operations such as this one should not be undertaken lightly—but they represent an alternative that physicians should have available to them when all other possibilities are exhausted.”

Column by Tom Hritz, POST-GAZETTE. Pittsburgh, PA on November 1: “But when it comes to saving the lives of people, I’m 100 percent for dead baboons.”

Column by Father Manning, HERALD EXAMINER, Los Angeles, CA on November 3: “To put animals on a plane of equity with humans is to deny the value of God’s love for us—a love that went to the extreme of the cross.”

Column by Judy Neuman, MERCURY-NEWS, San Jose, CA on November 3: “Anyone who thinks that it was wrong to try to give her that chance should have to spend the next few weeks in front of the empty cribs of the babies who didn’t live that day, explaining to their parents why research on animals is an evil thing.”

EDITORIAL: STAR, Toronto, ON. on November 11: “In such complex matters, one can never have absolute certainty that the final decision is absolutely ‘right.’ Doing the ethical thing is often ultimately a step of faith. You do what is best in the light of all the evidence and trust for the rest.”

EDITORIAL: DAILY NEWS, New York, NY on November 17: “Our view is that nature should have been allowed to run its course in this tragic case. The child was born with a fatally defective heart, and the doctors chose to try a transplant that had no proven record of success and was fraught with danger,”

EDITORIAL: CHRONICLE, San Francisco, CA on November 17: “To us, the bottom line is that Baby Fae lived three weeks and that Dr. Bailey and the medical team gave her the best treatment they knew how to deliver.”

EDITORIAL: KANSAS CITY TIMES, Kansas City, MO on November 17: “With good reason, laws limit experimentation at will. But if all medical efforts were dependent on a sure outcome, health care would still be very primitive.”

EDITORIAL: ARIZONA REPUBLIC, Phoenix, AZ on November 17: “Medicine has never been without controversy, and controversy flourishes when science and medicine breach new frontiers in treatment of disease and maladies.”

“Skeptics always have been around to argue why new avenues of research and that technology are not worth any time and money. Much more often than not, the skeptics have been wrong.”

EDITORIAL: EXAMINER-CHRONICLE, San Francisco, CA on November 17: “In the meantime, any analysis from the outside world that they did this for their own fame as trail-blazers of medical science is, we think, unfair. Any such charge rests largely on speculation that assumes the worst. Why not assume the best? Why not assume that these doctors working in a reputable hospital of religious affiliation, were motivated only to save the life of that tiny girl by the highest exercise of their abilities?”

Column, Dennis McCarthy, DAILY NEWS, Los Angeles, CA on November 18: “It was Bailey’s hands that had put the baboon’s heart in Baby Fae’s fragile body. And now it was his halting words telling the world she had died. Had he cried when his tiny patient died? Of course he had. And he was not alone.”

EDITORIAL: TRIBUNE, Salt Lake City, UT on November 18. “For all the controversy swirling around them, physicians at Loma Linda University can take satisfaction in that they have taken a step or two toward a better world for everyone.”

EDITORIAL: SUNDAY MAIL, London, England on November 18: “We’ve said it before! Such operations are unjustifiable experiments. Don’t do it, Dr. Bailey!”

Column, Harry Schwartz, WALL STREET JOURNAL, New York, NY on November 21. “But in conducting that debate we need to remember that our medical scientists are not mad experimenters as some critics seem to imply.”

EDITORIAL: COURIER. Evansville, IL on November 26: “Pioneers get all the arrows, it’s been said. So the pioneering doctors at Loma Linda University Medical Center should be prepared to withstand the barrage of criticism over their controversial treatment of Baby Fae, the valiant little infant girl who died recently after surviving three weeks with a baboon’s heart.”

Watch "Stephanie's Heart," the story of Baby Fae, on YouTube.