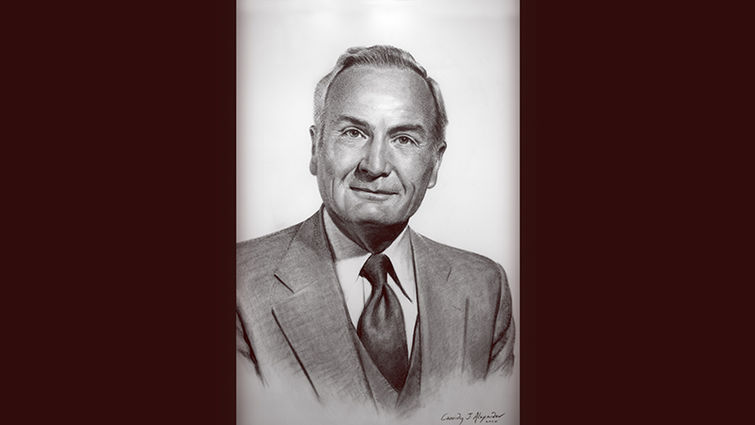 Jack Provonsha, shown in the portrait drawing above by Cassidy Alexander (2000), led in the bioethical discussions about the Baby Fae case.

One of the goals of medical research is to discover tolerable, practical alternatives to untimely death—tolerable, because there are worse conditions than death (medicine is concerned not only with the quantity, but with the quality of life)—practical, because while theoretically possible some alternatives may not in fact be available. The investigation that preceded it and the actual transplantation of a seven-month old baboon heart into Baby Fae’s chest on October 26 were carried out with this larger purpose in mind and it is important to remember this when reviewing the controversial Baby Fae case.

Organ replacement, either by the transplant of organs from donor sources or by mechanical devices, is an example of attempts to achieve this therapeutic goal. Unfortunately, for the transplant of organs there are not, and probably will never be, enough human donors available to supply the need. This is especially true for the neonate because of the special difficulties peculiar to that period of life. For one thing, neonates are rarely involved in the death by accident or violence that constitutes the primary source of donor organs for older members of the population. Finding a newborn who has suffered brain-death but possesses a healthy heart undamaged by the circumstances often associated with neonatal brain-death, and is of the right size and tissue type, and the right geographical location so that transport time does not compromise the organ, and for whom proxy donor consent has properly been given, present a complex of difficulties (further compounded if the recipient’s already moribund) that render availability unlikely. Add to this the difficulty experienced in diagnosing isolated brain-death in the newborn and one comes to see the practical limits of the allograft alternative for newborns. If an allograft were found it would seem an extraordinary coincidence almost guaranteeing that tissue type selection would be limited. Cardiac allografts do not at present appear to provide the practical alternative we seek to the untimely death. Practical mechanical hearts still remain a distant vision and no one that I know of is preparing one for neonates.

Two other alternatives must therefore be considered. One of these is the Norwood procedure—a several stage surgical effort to rearrange the structure of the hypoplastic left heart so as to permit the right ventricle to carry the load of the missing left. The procedure is still highly experimental with a prohibitive mortality rate and a dubious long range outcome—including a questionable quality of life. A successful surgical result provides somewhat greater longevity, but with a critically limited heart for the remainder of the child’s life.

The only other present alternative is the xenograft route taken by Dr. Leonard Bailey at Loma Linda. The practicality of the approach derives from the fact that donor organs are readily available, that is if one uses baboons (most of the other larger primates are protected species). There are other advantages. One does not have to wait for brain-death to occur before harvesting baboon hearts. This virtually guarantees healthy, functional donor organs. The proper size can easily be selected and one has some control over time factors both for donor transport and adequate tissue testing.

The main practical drawback is, of course, xenograft rejection and here the precedents are not encouraging, to say the least. A fair number of xenografts have been attempted in the past with dismal results in every instance.

There are some interesting innovations in the case of Baby Fae, however, raising the possibility of a different outcome. First, the immunological investigation of potential animal donors has proceeded far beyond anything done previously. Dr. Bailey and his associates have been studying xenograft techniques on animal models, chiefly sheep and goats—with varying degrees of success and with the accumulation of a large body of experimental data. The team’s work included the perfusion of baboon hearts with human blood—incidentally without apparent evidence of rejection.

What remained was the xenograft to a human host. In looking for a human model, the hypoplastic left heart syndrome was chosen because it was within Dr. Bailey’s competence as a pediatric thoracic surgeon and because the condition untreated was uniformly lethal. Success would, of course, have much broader implications. Satisfaction of the criteria noted at the beginning seemed assured. The animal studies indicated that the procedure was well-tolerated. As confirmation, Baby Fae’s condition post-op was obviously not an intolerable one. We have noted its practicality above.

One of the startling results of this research was the finding of a much greater histo-comparability (the key figures seem to prefer this term to histo-compatibility) between humans and at least some baboons that had previously been expected. Moreover, never had an attempt been made on so young a patient with the possible benefit of an immature immunological system and its diminished tendency to reject.

Another difference was Cyclosporin-A, a newer immunosuppressive drug that has made a great deal of difference to transplant technology. These three factors constituted a basis for hope that this alternative might offer a reasonable possibility of success—even a greater possibility than any of the other options including the human allograft—in the rare instance that one were really available. (A human source is obviously no guarantee against rejection. Allografts are also rejected) the other alternative was certain death and Baby Fae came close to selecting it more than once prior to surgery.

What we have had then, in the Baby Fae case, was a slightly premature child facing certain death unless something drastic were done to correct her congenital heart defect. There were four options, all but the first highly experimental and none of them good: 1) death, 2) the Norwood procedure, 3) a human allograft, and 4) a baboon xenograft. The ethical requirement that the incompetent patient’s well-being take priority over purely experimental purposes demanded that the best available option be selected even if this interfered temporarily with experimental goals.

Option 1: Death was unacceptable by all of the tenets of medicine; providing a reasonable quality of life was a possibility. Option 2: The Norwood procedure had serious problems, including an unacceptably high mortality rate and a reduced quality of life. Option 3: A human allograft was impractical as a solution to the larger organ transplant problem and presented specific insurmountable difficulties for the newborn, which leaves us with Option 4: the baboon xenograft. In this case, because of new information and better immunosuppressant drugs, while there remain large questions, there was provided a real measure of hope. It if were successful, it would not only offer a practical solution to the Baby Faes among us, but a host of other possibilities down the line. On balance, option 4—as questionable as it was—offered at least as great and possibly greater therapeutic hope than either options 2 or 3. We would not know if the xenograft were not attempted.

As much experimental preparation had been made as possible using animal models. Proper consent was apparently provided including the protection of the incompetent. Therapeutic goals were sought rather than purely experimental ones, that is, that the baby was considered to be more important than the experiment.

Baby Fae lived almost three weeks after surgery, apparently at least two good weeks. This was much longer than any other xenograft had ever survived. And when she died she apparently died with very little evidence of classical cellular rejection. An enormous amount of information has been accumulated that may augur well for the future. Was it worth it? Only the future will tell us for sure. But at least it seems that those involved have acted with ethical responsibility in the past and in the present.