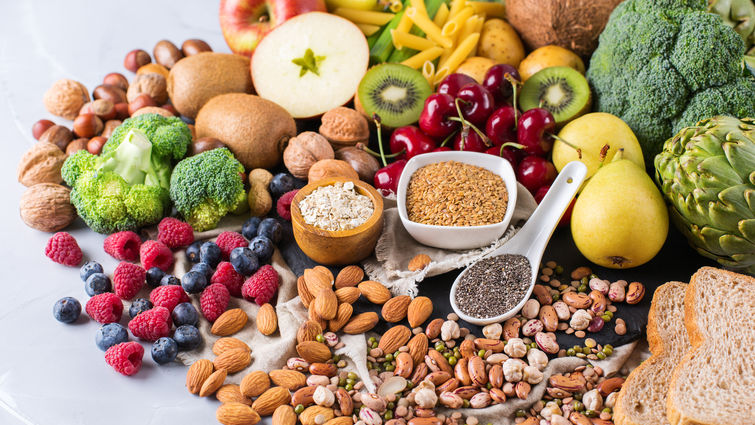 “Inflammation, which can be controlled through diet, has been known to promote cancer cells to grow and spread,” Woodward says. While there are many diets claiming to reduce inflammation and enhance health, some are very restrictive or confusing, he says.

Instead of looking at where these diets exclude certain foods, Woodward suggests trying to see where these dietary approaches intersect. Doing this encourages people to eat from many categories of foods that should be consumed daily, he says. By choosing to follow a strategic dietary plan, health-conscious people can effectively manage many risk factors and battle their disease — all while increasing their quality of life.

Berries — Blueberries, boysenberries, cherries, cranberries, pomegranates, raspberries and others add sweetness to the palate, but are relatively low in natural sugar, Woodward say. Many varieties provide an abundance of blue-purple pigments called anthocyanins that reduce inflammation and protect the brain from oxidation. Berries also contain ellagic acid, which neutralizes carcinogens and has anti-tumor benefits. Blueberries contain pterostilbene — a powerful antioxidant and can reduce inflammation.

Cruciferous vegetables — Broccoli, Brussels sprouts, bok choy, cabbage, cauliflower, collard greens and kale are all considered cruciferous vegetables. These vegetables contain chemicals called glucosinolates that fight cancer in several ways. These chemicals include indole-3 carbinol, which reduces hormone-sensitive cancers; sulforaphane, which deactivate carcinogens; and fiber, which is a cancer preventive. Try these raw, in smoothies or lightly cooked with your favorite seasonings. Or try kimchi for a tangy alternative to cabbage that adds zest to salads or bland foods.

Garlic and onions — The National Cancer Institute suggests garlic and onions may reduce the risk of stomach, colon, esophageal and breast cancer. Woodward says garlic has measurable anti-bacterial, anti-fungal and anti-inflammatory benefits, as well as cancer-fighting properties. Cancer prevention comes from many sulfur-containing substances, including allicin and diallyl sulfide (DAS), which appear to deactivate carcinogens and prevent DNA mutations. Onions offer many of the same benefits, providing quercetin and sulfur-containing molecules that block some carcinogens and induce apoptosis, a process that kills abnormal cells.

Mushrooms — In addition to adding flavor to foods, mushrooms have an assortment of immune modulation benefits. Immunomodulation goes beyond stimulating the immune system by selectively bolstering your immune system against foreign microbes, but not your own cells. Other noteworthy benefits include antioxidants, reducing hormone-related tumors and reducing excess inflammation. These benefits can have the most impact when eating mushrooms that are fresh, cooked, powdered or dried.

Spinach and other green leafy vegetables — Spinach is a powerhouse of nutrients whether eating raw, juiced or lightly cooked. Spinach is loaded with: vitamin K, which promotes blood clotting; carotenoids, which supports eye health and antioxidants; fiber; folate, which aids DNA formation and repair; and other phytochemicals. Several studies suggest that phytochemicals glycoglycerolipids and carotenoids fight cancer; especially prostate, breast and stomach types. Baby spinach has less oxalate, so the absorption of calcium and iron is greater. Spinach and arugula also contain plant nitrates that produce nitric oxide and nourish the endothelium (inner lining) of blood vessels.

Ginger and other seasonings — Certain compounds found in ginger make it a powerful anti-inflammatory and antioxidant food to reduce oxidative stress that your body has to fight on a daily basis. Ginger is also useful to calm the stomach and reduce nausea. Woodward suggests using a variety of seasonings such as basil, oregano, dill, cinnamon, clove and many others to flavor foods as well as reduce inflammation. Using these in their dry form maintains their shelf life for about two years, while also preserving them in a concentrated form. Adding seasonings to recipes also reduces the need for excess salt, adding more antioxidants and add flavor.

Many other plant foods have cancer-fighting properties and health-enhancing benefits. “Add variety to a healthy diet with beets, carrots, chili peppers, citrus fruits, seaweed, tomatoes, etc,” Woodward says. “The more colors on your plate, the better.”

He says the quality of a diet is linked to overall health and ability to prevent cancer and other diseases. However, other factors are also important for cancer-prevention, such as exercising, avoiding toxin exposure, not smoking or consuming too much alcohol, sleeping well and controlling stress.

Talk with your healthcare provider if you have questions about cancer, or other disease concerns. To learn more about a variety of resources and support for both patients and their loved ones battling cancer, visit the Loma Linda University Cancer Center or visit your primary care physician by scheduling an appointment online or calling 909-558-6600.