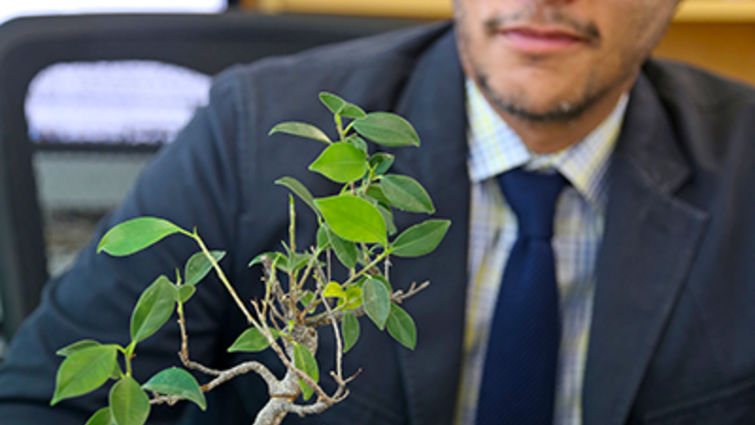 The connection between a bonsai tree on a Loma Linda University researcher's windowsill and a paper he just published in eNeuro, the open-access online journal of the Society for Neuroscience, may not seem obvious at first.

But when you meet Johnny D. Figueroa, PhD, and see the care and attention he lavishes on his miniature tree, the relationship starts to come into focus.

“I love bonsais,” Figueroa observes, gazing at the gnarled giant in miniature.

Unlike other plants that can survive a few days without water, bonsais—rooted in very little soil inside a small pot or tray—are completely dependent on their owners for nutrition, hydration, and light.

Figueroa sees an important similarity between bonsais and humans: proper nutrition is essential to both, especially during the early years. With that in mind, the assistant professor at Loma Linda University School of Medicine (LLUSM) entered the research laboratory hoping to trim junk food from the typical American diet the way a master gardener deftly nips unwanted foliage.

Two years ago, he began to investigate the effects of the typical, Western high-fat diet on our ability to respond to stress. The title of the study—“Western high-fat diet consumption during adolescence increases susceptibility to traumatic stress while selectively disrupting hippocampal and ventricular volumes”—will probably never win a blue ribbon from the Country Music Awards, but it does describe the scope and findings of his research.

While psychological trauma and obesity frequently occur together and are both major risk factors for psychiatric disorders, Figueroa—who served as principal investigator on the project—discovered that very few studies have examined how obesity disrupts the brain’s ability to cope with stress.

So he and his team designed a series of experiments in which two groups of adolescent rats were fed two distinctly different diets. The first group dined on the typical, Western high-fat diet with 41 percent of calories coming from fat. The control group, on the other hand, ate a balanced rodent diet with fat contributing only 16.5 percent of calories.

They then subjected both groups of rats to a substance known to elevate stress responses in rodents: the scent of cat urine.

The team measured the results of the test in two ways: first, by monitoring both groups of rats for trauma-induced anxiety-like behaviors; and second, by looking for changes in the size of relevant brain structures using magnetic resonance imaging, or MRI.

The results were convincing. In terms of monitoring the rat’s behavioral manifestations, Figueroa and his team found increased psychological trauma-induced anxiety-like behaviors in rats that consumed the Western diet when compared to control animals one-week after being exposed to the cat urine stress test.

He adds that a reduction in size of the hippocampi (there are two of them, one on either side of the brain) is associated with a loss in memory and cognitive function, and that an increase in the size of the lateral ventricles is similarly related to brain dysfunction and disorders such as schizophrenia, bipolar disorder, depression, and even Alzheimer’s disease.

The bottom line: Figueroa and his team found exactly what they thought they would find—namely, that eating a high-fat diet during adolescence leads not only to obesity, but more importantly, to a reduction in the brain’s ability to recover from stressful events.

The “we” he references are Figueroa’s collaborators: Priya Kalyan-Masih, Julio David Vega-Torres, Christina Miles, Elizabeth Haddad, Sabrina Rainsbury, Mohsen Baghchechi, and Andre Obenaus. All are affiliated either with the Center for Health Disparities and Molecular Medicine, the department of basic sciences, or the department of pediatrics at LLUSM.

Figueroa and his colleagues worked only with rats, but what about people? Will eating too many burgers, fries, burritos, and shakes lead to mental and psychological decline in humans? Figueroa is convinced that the results are applicable to humans.

“We anticipate that this study will inform the path to needed biomarkers and interventions for improving the quality of stress and anxiety management, particularly in a growing overweight and obese population,” he concludes.

And with that, he turns to the windowsill to water his bonsai.