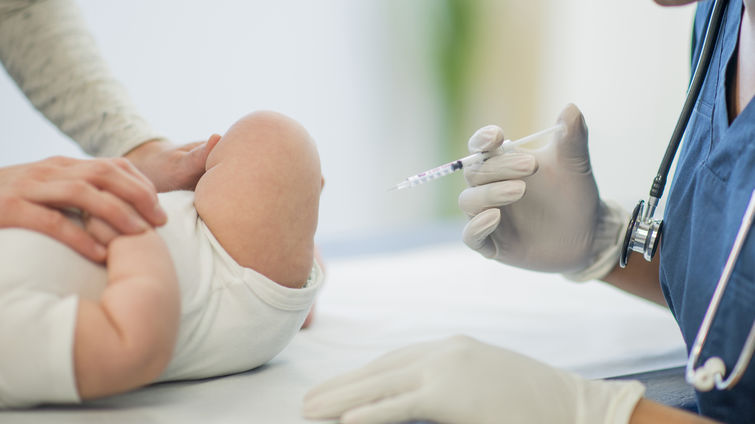 Dr. Maulin Soneji explores common vaccines recommended for infants between birth and 15 months and how these immunizations and will protect infants in the real world.

As a new parent, it may be overwhelming to face the many steps involved in taking care of a new baby’s health. One of those steps is infant immunizations. According to the Centers for Disease Control and Prevention, vaccinations are necessary for preventing infants from developing a severe illness, pain, disability, or even death from an infectious disease.

Maulin Soneji, MD, a pediatric infectious disease specialist at Loma Linda University Children's Hospital, says with early-in-life vaccinations, physicians are trying to prevent illnesses — such as meningitis, pneumonia, tetanus, and whooping cough, to name a few. Infants are most at risk for these diseases within their first year of life.

"We know that an infant doesn't have to be out and around a ton of people to contract these illnesses," Soneji says. "It just takes the right exposure from a parent who unknowingly picked up the bacteria from work. We've seen infants, especially under six months of age, who were not vaccinated against these common illnesses or were only partially vaccinated — they were hospitalized with very severe illness. There have even been cases of infant mortality from these preventable conditions.”

Below, Soneji explores common vaccines recommended for infants between birth and 15 months and how these immunizations and their booster vaccines will protect infants in the real world.

Hepatitis B is a vaccination generally recommended for infants within 24 hours to several days after birth. The hepatitis B virus causes liver inflammation and potentially liver cancer later in life, Soneji says. In the 1980s, before a vaccination was available, Soneji says about a quarter of children who had hepatitis B had no risk factors for the disease — factors including blood transfusions without pre-screened blood, IV drug use, and mixing of sexual bodily fluids.

"Although hepatitis B is commonly viewed as a sexually transmitted disease, the reason to vaccinate your infant so quickly is that the virus can survive outside the body on many surfaces without anyone knowing," he says. "Infants can then easily be exposed virtually anywhere."

Between 15% to 25% of children can get infected by hepatitis B within the first five years of life with no previous risk factors for the disease.

Rotavirus causes gastrointestinal diseases such as diarrhea, vomiting, and dehydration. Soneji says the illness from rotavirus is very common. “Around the world, it’s one of the leading causes of death in children under five,” he says. “However, in the U.S., not many children die from the rotavirus infection because we have access to IV fluids, clean drinking water, etc. But the vaccine has shown a significant decrease in the need for prolonged hospitalization after an infant contracts the virus.”

This combined vaccine protects from these three diseases. Diphtheria and tetanus are caused by bacteria, which produce toxins in the body. The vaccine helps the body produce antibodies to fight those toxins, Soneji says.

According to the CDC, diphtheria can lead to paralysis, difficulty breathing, heart failure, and even infant mortality.

Tetanus causes painful muscle contractions, including lockjaw, making it hard for a baby to swallow or move their mouth, Soneji says. “The bacteria causing tetanus can even be found in the dirt — so any child just innocently playing in their backyard could be exposed,” he says.

Infants are most susceptible to pertussis or whooping cough. This disease causes violent coughing and breathing difficulties. For infants, it can be deadly, Soneji says.

Haemophilus Influenzae Type B and Pneumococcus

Haemophilus influenzae type b (Hib) and pneumococcus are bacteria that cause pneumonia, meningitis, and sepsis in infants.

"In the past, before this vaccine, a hospital like Loma Linda University Children’s Hospital would treat two to four cases every week," Soneji says. "With Hib, 50% of kids would have some morbidity or mortality — so they would either die or be left with a disability ranging from mild hearing loss to developmental problems like cerebral palsy. All from this one bacterium causing meningitis."

According to Soneji, physicians have also seen that when infants and kids are vaccinated against pneumococcus, their grandparents contract pneumonia less often.

Many parents may know of polio as a disease that is almost eliminated from the world. However, the disease still appears in some countries. Because it is highly contagious, Soneji says it wouldn't take much for the disease to again spread rapidly without continued immunization.

"Polio was huge in the 1950s, but the U.S. has been virtually polio-free since the late 70s," he says. "The virus can infect a person's spinal cord and brain, causing paralysis and life-long physical challenges. Hopefully, there will come the point when we can eradicate it from the planet completely.”

According to the CDC, the best way to remain a polio-free nation is to maintain high immunity through vaccination.

MMR stands for measles, mumps, and rubella, while varicella is more commonly known as chickenpox.

"Every year, before the chickenpox vaccine, about 100 children in the U.S. died from chickenpox," Soneji says. "And while it wasn't the virus that killed you, the pox would get infected with strep, seep into the bloodstream and eventually lead to death. Kids would not have gotten that bacteria in their bloodstream if it wasn't for the pox."

Additionally, if a child doesn’t come down with chickenpox when they’re young, they won’t have the virus in their body to get shingles when they’re older.

For measles, Soneji says physicians are seeing cases on the rise. Kids can contract the virus while traveling around the U.S. and abroad. According to the CDC, the disease spreads through the air when an infected person coughs or sneezes, causing serious health complications like inflammation around the lungs and brain, especially in kids younger than 5 years old.

“Measles is one of the most contagious viruses we know of,” he says. “People who have received the MMR vaccine may still contract measles, but their illness will be much less serious.”

Hepatitis A causes liver inflammation, potentially leading to liver failure. It is transmitted differently than hepatitis B. Like food poisoning, hepatitis A spreads through food and water contaminated with fecal bacteria, Soneji says. Some infected people may not get diagnosed with hepatitis A and unknowingly spread the virus.

According to Soneji, flu has been much less common this year due to social distancing, proper hand hygiene, and mask-wearing; however, it has not gone away.

“The illness affects the respiratory system and often leads to hospitalization and even death in babies and young kids,” Soneji says. “We know that outcomes are better at every level when an infant or an adult has the flu vaccine — if they contract the virus, they are less likely to become seriously ill and need hospitalization. Flu vaccines are like wearing a seatbelt during a car accident. A seatbelt won’t stop me from getting into a car accident, but if the accident happens, it will protect me from many more serious outcomes.”

What about a COVID-19 vaccine?

The need for a COVID-19 vaccination for babies is still being studied, Soneji says. “They’re just now starting studies in kids six months to 11 years of age,” he says. “It’s going to take time to study the effects, dosages, etc.”

Although the number of vaccines infants receive has risen in the past decades, Soneji says infants are having less non-helpful antigens put into them.

"I was born in the 80s — at the time I was born, the number of vaccines infants and kids received was fewer. However, the number of antigens (proteins that are in vaccines, which stimulate the immune system to create antibodies to a specific disease) is fewer than when I was a kid," he says. "This is because medical professionals have gotten better at understanding what the immune system responds to, and we've been able to remove things from vaccines over time that don't help in a person's immune response."

Soneji encourages parents to be open and honest with their pediatrician about any concerns they may have. “It’s so important for parents to ask their doctor questions if they are having fears or doubts,” he says. “Find a physician you trust and have a conversation with them about vaccinating your infant.”