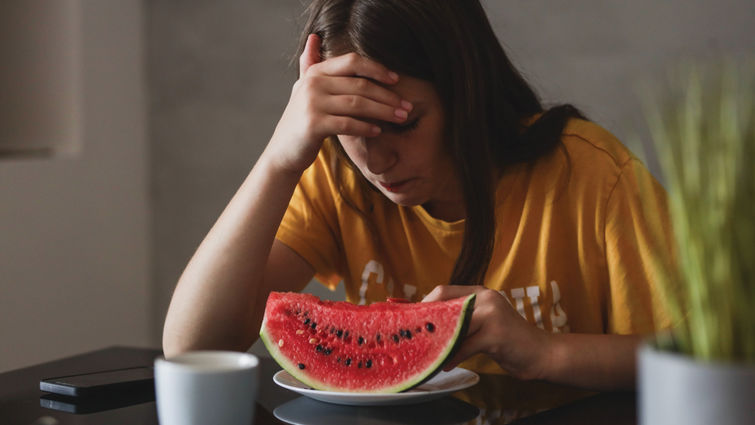 Although eating disorders in kids are generally uncommon, parents should be aware of the signs as their child grows from adolescence into their teen years.

Jo Everett, MD, a psychiatrist specializing in eating disorders at the Loma Linda University Behavioral Health Institute, says even though it’s unusual to see an eating disorder in a child younger than 10-years-old, eating disorders are unfortunately being diagnosed in younger and younger children, including anorexia, bulimia, and binge eating.

Everett explains that eating disorders are so serious that they have the highest mortality rate of any mental health disorder.

What is an eating disorder?

“Eating disorders are diagnosed when individuals struggle with their relationships with food to the point that they are engaging in dangerous behaviors,” Everett says. “A key component of eating disorders is a disturbance in the way an individual views their own body, and their body image becomes incredibly distorted.”

Anorexia nervosa includes restricting food intake to the point of excessive weight loss and a significantly low body weight. “Individuals struggling with anorexia nervosa have an intense fear of gaining weight or becoming fat,” she says.

“A ‘binge’ is eating an excessive amount of food to the point of feeling overly full and feeling a sense of lack of control while eating,” Everett says. “Compensatory behaviors can include self-induced vomiting, using laxatives or diet pills, fasting, or engaging in excessive exercise.”

It is often diagnosed in late adolescence or early adulthood and is less common in younger children, she says.

Binge eating is the rarest eating disorder in kids and adolescents and is characterized by repeated episodes of binge eating, Everett says. This includes:

“In addition to changes in behavior, parents may also notice some physical changes including weight loss, losing hair, brittle nails, frequently being cold, loss of menstrual cycle, and the face appearing puffier,” she says.

Everett recommends reaching out to your pediatrician as a good first step if you have concerns your child may have an eating disorder. Additionally, if you child has a therapist or psychiatrist, they would also be able to further investigate and potentially make a diagnosis.

At Loma Linda University Behavioral Medicine Center, individual therapists and psychiatrists can aid in the treatment of eating disorders and the anxiety and depression that sometimes go with them, Everett says.

“We also have a partial hospitalization program for adolescents diagnosed with eating disorders, in which patients spend the day with us in a group setting working on nutrition, body image, self-esteem, and coping skills,” she says.

She encourages parents that communication is key. “If you have concerns, talk to your child,” Everett says. “I promise, you won’t make it worse! Please reach out for support from your child’s doctor. Eating disorders can be scary diagnoses and can take a long time to treat, but there are interventions available.”

Make an appointment to talk to your pediatrician or learn more online about resources at the Behavioral Medicine Center.