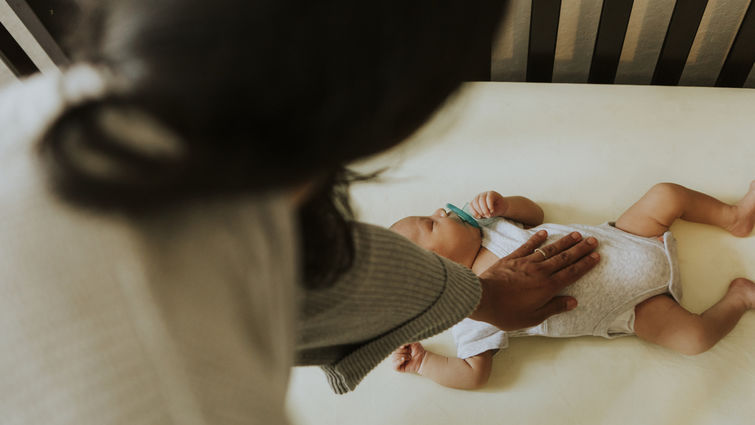 Approximately 3,400 infants died unexpectedly in the U.S. 2019, according to the Centers for Disease Control and Prevention. Of those deaths, 1,250 were due to sudden infant death syndrome (SIDS).

Sometimes referred to as “crib death,” SIDS occurs when an infant less than a year old suddenly dies for no known reason, generally while the baby is sleeping. Elba Fayard, MD, medical director of the neonatal intensive care unit and division chief of neonatology at Loma Linda University Children’s Hospital, says death due to SIDS is more frequent than death due to any other cause in the next 17 years of a person’s life.

“This unexpected death is very devastating for parents," Fayard says. "SIDS is very scary because you don’t know when this may happen, and you cannot explain it if it does happen."

Research has shown that both maternal and infant risk factors may affect the likelihood of SIDS. Fayard says some of these factors include maternal age under 20-years-old, maternal smoking during pregnancy, late or no prenatal care. The baby's risk factors may include being born preterm or having a low birth weight. “We also know there are demographic risks,” Fayard says. “For example, we see higher incidents of SIDS in Black and Native American babies. Additionally, more boys die than girls due to SIDS, although the difference is not very significant.”

While the direct causes of SIDS are unknown, Fayard says SIDS is considered a multifactorial disease, and experts think several issues come together to lead to this unfortunate event. “Ultimately, these factors lead up to a common pathway where these infants may not be able to wake themselves up when they're having trouble breathing and end up in a state of oxygen depletion," she says.

While there are no tests to predict whether SIDS is likely to occur to an infant, Fayard provides tested guidelines for parents to lower the chances.

Always put your baby on their back to sleep.

Fayard warns parents to never put their baby to sleep for the night on their belly or side. Back sleeping lowers chances of overheating — another factor linked to SIDS, lowers chances of the baby suffocating on an object in the crib, and allows the baby to not sleep as deeply and be able to awaken and change position if there is oxygen depletion.

Have your baby sleep on a firm surface.

Fayard advises that babies should never sleep on sofas, cushions, waterbeds, air mattresses, sheep skin, or other soft surfaces. “Studies show that soft sleeping surfaces are a consistent risk factor for SIDS,” she says. “In one study, soft bedding increased the risk of SIDS fivefold.”

Additionally, do not put your baby to sleep in a swing or car seat —unless the infant is riding in the car — where the airway may be inadvertently compromised.

Have nothing in the crib except a fitted sheet.

Fayard says to remove all pillows, stuffed animals, blankets, and other soft objects from the baby’s crib and to not use bumper pads or sleeping pads.

“Have just the bare minimum next to the baby until after they turn one,” she says. “Any additional items in the baby’s crib increases the chances of the baby suffocating.” However, Fayard says letting the baby sleep with a pacifier may not only help soothe them, but studies have shown it keeps the infant’s airway open. She warns to not connect the pacifier to the infant, as it may lead to strangulation.

Maintain a comfortable temperature in the room itself, Fayard says. She warns not to overdress the baby or swaddle them too tight. “It has been shown that overheating and overwrapping increases the chances of SIDS, potentially because the baby falls into a deeper sleep and has trouble awakening,” she says. "One light layer of clothing is recommended. Avoid covering the baby’s head while they are sleeping."

Fayard says it is best to keep your baby in their own crib. Co-sleeping with an infant increases the chances of the baby suffocating by a pillow, blanket, or even the parent's body. If co-sleeping is desired for peace-of-mind or breastfeeding during the night, she recommends moving the infant to a separate crib next to the parents’ bed so the baby is nearby but not on the same surface.

Breastfeed your baby, if possible.

Breastfeeding seems to have a very important protective effect, cutting down SIDS by half, Fayard says. “Studies have shown that breastfed babies are more easily roused from sleep, meaning they’re less likely to die from SIDS,” she says. Additionally, breastfeeding mothers are less likely to smoke, which lessens a baby’s risk of exposure to smoke — another proven risk for SIDS.

Studies have shown anti-SIDS devices such as electronic breathing monitors or oxygen saturation meters, do not prevent SIDS and may actually increase the risk by giving parents a false sense of securty that may lead them to ignore other proven preventive measure. Additionally, Fayard says other items not recommended include apnea monitors, sleep-position wedges and devices.

SIDS is a very serious threat for any parent that takes home a new baby. Fayard says SIDS incidences generally occur between the first two to four months of a baby’s life and peaks the most at week 11. “As the baby gets older and stronger, the brain matures, and the risk of SIDS continues to drop and is lower after six months,” she says. “It’s occurance is very rare after one year of age.”

There may be more you would like to know about SIDS, and the physicians at Children's Hospital are here to guide you through this challenging time, provide you with information, and answer any questions you might have. Make an appointment with your provider today or visit our website for more information about sudden infant death syndrome.