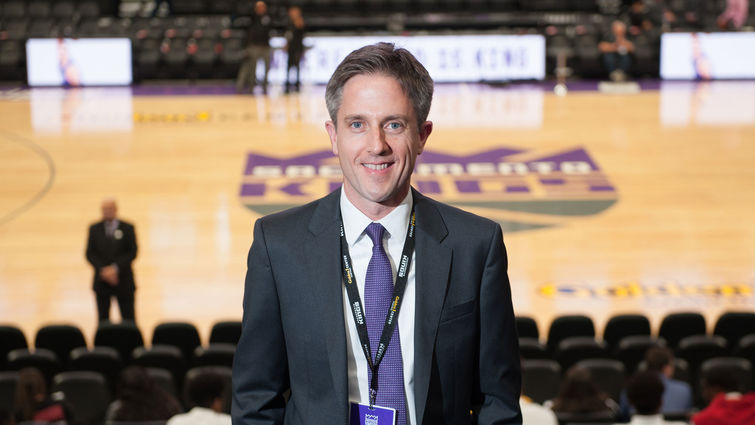 When Jason Brayley, MD, applied to become chief of sports medicine for Kaiser Permanente in Sacramento, he was drawn to the healthcare system’s vision for growing its sports medicine practice and its approach to keeping people healthy.

He didn’t give much thought, if any, to talk of Kaiser Permanente potentially becoming the primary medical provider for the California capital city’s Sacramento Kings.

But about a month after the Yucaipa, Calif., native started his new job, his boss asked what he would think about being a Kings’ team doctor.

Brayley is one of two physicians who regularly attend home games, responsible for the care of the Kings and of the visiting team, referees and other staff. If a medical issue arises before, during or after a game, Brayley is available to attend to the matter as needed.

He also acts as the Kings’ primary care doctor, advising and treating players and their families when they have medical needs — whether it’s dealing with the flu, stomach ailments, infections or other issues.

“It’s a 24/7 job,” Brayley says. “NBA athletes are human beings just like us with families and life stresses. Part of my job has been to establish relationships that help provide care in any way that the athlete or family may need.”

Brayley also enjoys providing the same level of care to the range of patients who walk through the doors of Kaiser’s sports medicine center inside Golden 1 Center, the Kings’ home arena.

Brayley’s role is one he never imagined for himself, though he can pinpoint experiences that, in retrospect, clearly helped set the stage. One is his time in medical school: he especially credits two professors — Resa Chase, MD, and Ben Nava, PhD — for encouraging him to persevere despite a trying first quarter.

He also points to the sacrifices of his family to support his education. His father was a psychiatric tech who worked two full-time jobs, and his mom taught second-grade. Brayley didn’t come from a line of doctors, but growing up near Loma Linda, he was surrounded by them. An early interest in physical therapy while in high school at Loma Linda Academy evolved into a desire to pursue medicine.

“It was a career that was interesting, that I thought was a good calling, so I went for it,” he says.

He attended Pacific Union College in Northern California’s Napa Valley before going on to Loma Linda University School of Medicine in 1997. He grew interested in family medicine as he completed rotations at military hospitals, which were required for the U.S. Navy scholarship that paid for his last three years of medical school. After graduating in 2001, he completed a three-year family medicine residency through the Naval Hospital Camp Pendleton on the Marine Corps base north of San Diego, followed by three years of service at Naval Air Weapons Station China Lake in the western Mojave Desert.

A sports medicine fellowship at Ohio’s Cleveland Clinic — the healthcare provider for the Cleveland Cavaliers — began laying the groundwork for his future practice. Working under team doctors for a year gave him an up-close view of the rhythms and requirements of being an NBA physician. At the same time, he volunteered as doctor for a cycling team, a role he performed until 2013, further expanding his experience in caring for professional athletes.

“The fellowship leaders thought it was a good idea for me to get my feet wet, so they supported me doing that on my own,” says Brayley, who had long followed professional cycling and done his share of road racing. “Being involved with a domestic professional cycling team was a great opportunity to expand taking care of progression athletes.”

After his fellowship, Brayley looked for jobs with a sports-medicine focus that also would bring him back to California. An opportunity with a Seattle-area healthcare system checked the first box, and he and his young family headed west. Five years later, the position in Sacramento opened, and he jumped at the chance to work in Northern California.

In some ways, he’s come full circle: the Kings played in the first NBA game he ever attended.

“I look back in hindsight and realize how many of these little small things that seemed relatively unimportant at the time were part of the bigger picture,” Brayley says.

“Every move I’ve made since high school and college is based on leaps of faith, and you feel like you’re sort of steered in one direction,” he says. “My wife and I felt like we’d been led every step of the way."