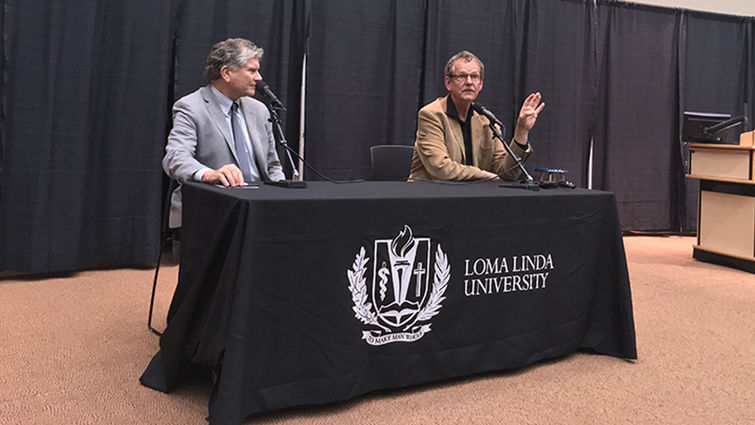 Professor of Religion James Walters, PhD, left, and guest speaker Philip Clayton, PhD, took questions from the audience after Clayton’s plenary address during the conference “What’s with Free Will? Ethics and Religion after Neuroscience.”

Arms crossed in defiance. So reacted many of the audience members when Philip Clayton, PhD, stated his conviction that humans don’t have complete free will. Noting this instinctual response of his listeners, Clayton said:

“Half of you just crossed your arms over your chest, which is a biological signal that you think I’m wrong.”

For community members attending the conference “What’s with Free Will? Ethics and Religion after Neuroscience” on May 19-20, the topic’s complexity was revealed in the range of viewpoints argued by Clayton, of Claremont School of Theology, and the event’s other plenary speaker, Thomas Oord, PhD, of Northwest Nazarene University, as well as numerous other scholars during the smaller sessions.

Professor of Religion James Walters, PhD, of Loma Linda University’s School of Religion, where he also directs its Humanities Program, organized the conference to consider the vast topic of free will, particularly in light of some new neuroscience findings that may suggest free will is just an illusion. That idea runs contrary to centuries of much Christian teaching that argues for free will as both a cornerstone of theodicy and a sign of God’s love for his creatures — a love that does not allow Him to compel. The topic of free will is also crucial to fields such as law and ethics.

Clayton began his presentation by asking the audience members to clap their hands or blink, noting that they did so of their own free choice. Some refused to do it, also indicated their free choice — right?

“By and large, we just know we’re free, don’t we?” he asked, before spending the next hour arguing that most people don’t have genuine freedom — but that people may possess a psychological and spiritual freedom that, for most intents and purposes, is genuine.

The answer we give to the universe

Beginning with new findings of neuroscience and then discussing the increasing complexity of living organisms, from single-celled creatures to the great apes to humans, Clayton explained how both complexity and unpredictability increase, along with the ability to learn new behaviors.

But does that equal genuine free will? He argued no: humans are conditioned and bound — by genetics, the workings of the brain, experience and education, to name a few — to make the choices they do.

Was Nobel Laureate Francis Crick right? Are we “nothing but a pack of neurons”?

No, argued Clayton. He suggested a way to rise above pure determinism, via an asymptotic (for the mathematically inclined) or quasi type of freedom. He said that though humans cannot truly break free of every influence over them, according to scientific findings, they can choose a self-identity in which — looking back and looking forward — they own responsibility for their actions even if they weren’t taken freely.

In other words, humans transcend their lack of choice by creating personhood. And this allows humans to come into communion with what philosophy calls “the ground of our being,” which Clayton believes to be God. Having a relationship with Him.

This, Clayton said, is the answer we give to the universe.

Begin with the obvious

Audience members heard a different perspective from Oord the next day. He opened his talk by asking the audience to imagine explaining the human experience via email to a being from a different galaxy.

Would free will be something to include that email? He argued yes — of a limited variety. Despite what we’re told as children, we cannot actually be anything we want when we grow up. A person with no coordination cannot play the game like their favorite professional athlete, for example, he said. A blind person cannot choose to see.

But in general — starting with what he called the most obvious reason — Oord argued that our actions reveal our basic belief in freedom. He noted that if someone is punched, he or she will blame the aggressor.

Free will, Oord said, helps people make sense of other people and is necessary for the societal and religious concept of moral responsibility. Other items on his list of nine reasons we should affirm freedom included:

• It shows us that our lives matter.
• It explains the desire to reject the old and embrace the new (change one’s ways).
• It is most compatible to believing in a God who loves us.
• It explains our desire to learn.

This is an argument many would agree with. But Oord declared another, more controversial tenet: God, too, is limited.

Yes, Oord said: by the very nature of God’s being — love — He cannot act outside the desire for creaturely well-being.

This begs the question of why He doesn’t then prevent suffering, Oord said.

But unable to stop wickedness? Part of His nature that Oord argued God cannot deny is to give life and give autonomy with it. And as an open theist, Oord believes God does not know the future and could not predict whether that freedom would mean creatures choosing sin and evil.

The panel of experts responds

Following Oord’s presentation, a panel of some of the conference’s scholars responded.

On the whole, Oord’s concept of human free will seemed to appeal more to most members of the panel than did Clayton’s. But there was some disagreement from the panel about Oord’s argument that God’s will is not completely free.

Winslow, for example, expressed discomfort with the idea that God “has to” give creatures free will. Rather, he said, “God risked much in the service of love.”

For her part, Ferreras agreed that God cannot exert complete control over humanity, but she said that He is able to act in the world for the good through the church.

The greatest amount of love

Clayton was tasked with making a closing statement. He started by noting that he and Oord, with their two different ways of seeing, both have the same commitment to belief in a God of love.

And to understand God’s love, the best way to do so is to put it in terms of the greatest amount of love that humans can conceive of, Clayton said, which he believes is revealed through studying the nature of Jesus.

Clayton referred to the apostle Paul’s letter to the Philippians, chapter 2:6-8, which says of Jesus:

Who, being in very nature God, did not consider equality with God something to be used to his own advantage; rather, he made himself nothing by taking the very nature of a servant, being made in human likeness.

And being found in appearance as a man, he humbled himself by becoming obedient to death — even death on a cross!

Humans have the freedom to make a similar choice, Clayton said. “A God who would … voluntarily limit Godself so that we as puny human beings could rise, be free and enter into relationship with God, is the model for our own love, to voluntarily … live in a sacrificial way for others.”

Summary of viewpoints on free will

Conference planner Walters said after the event, "I couldn't be more pleased with how the conference came together. The quality of the presentations was top-rate, the discussion significant and engaging, and the diversity of views broad. No one argued for a simple free will. A few argued that free will is more hope than reality, but the majority view was that humans possess genuine, but limited, free will."

Video of the conference can be viewed on the LLU School of Religion events video page.