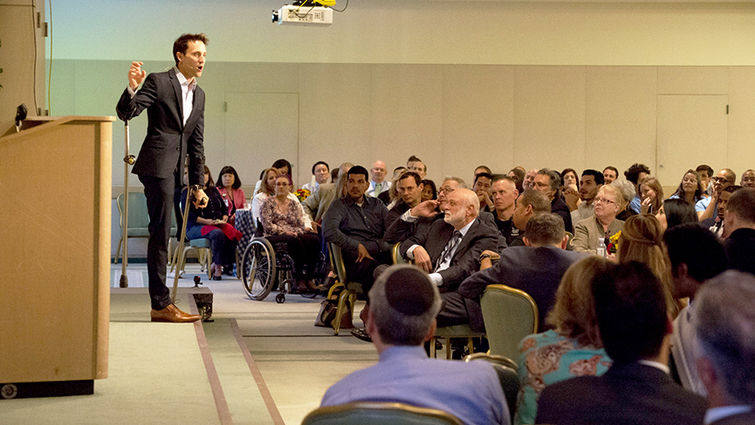 Josh Sundquist shares the story of his journey from amputation to ski racing at the 2006 Winter Paralympics during the 2017 PossAbilities Sports Luncheon on Wednesday, Nov. 1 [all photos by Michael Easley, Vital Excess Design]

An enthusiastic crowd of some 175 sports fans raised a total of $81,500 during the 2017 PossAbilities Sports Luncheon, which was held Wednesday, Nov. 1, on the campus of Loma Linda University Health.

The keynote speech by author and athlete Josh Sundquist alternated between the humorous and the profound. Sundquist took the stage on crutches to share highlights of his journey from the childhood cancer that led to the amputation of his left leg to the fulfillment of his dream of representing the United States in the 2006 Winter Paralympics in Torino, Italy.

Sundquist said he finds it interesting that many figures of speech are literally true for amputees. “For example, if I say I’m going to hop in the shower, I mean that literally. I think about that every time I shower. That’s very amusing to me,” he said, hopping around to prove his point.

Earlier this year, Sundquist had an experience that reminded him of everything he doesn’t like about dealing with insurance companies. “In July, my health insurance company sent a nurse to my apartment to examine me because, according to their computer system, my body weight is dangerously low for my height,” he said.

When Sundquist was nine, his dream was to join a travel soccer team with lime-green uniforms. Unfortunately, the very week he was scheduled to try out for the team, he was forced to undergo a biopsy on his left leg instead.

Sundquist shared that the prospect of losing his hair to chemotherapy was devastating. But when he arrived home from his first treatment, he opened the front door to discover that his seven-year-old brother, Matthew, had shaved his head in solidarity. A few days later, 18 of his friends showed up and shaved their heads. “I will tell you, that having cancer obviously is not easy. But having friends like that, having support like that, made it just a little bit easier,” he said.

Sundquist transitioned seamlessly back into the moment, reminding members of the audience that they were providing a similar level of support to the seven Paralympic hopefuls Payne had mentioned earlier. “Having your support makes it just a little bit easier for them to reach their dreams of becoming Paralympians, of wearing the uniforms that they are seeking,” he said.

Watching the 2002 Winter Paralympic Games in Salt Lake City in person turned into a pivotal experience for Sundquist. Since the United States was the host country, American athletes walked in last during the opening ceremonies. “I saw that team march in and I said, ‘Ah, that is going to be me in four years in Torino, Italy,’” he said.

Getting there, however, would not be easy. Sundquist, who was a junior in high school at the time, told his parents he wanted to move to Colorado the next year to begin training as a ski racer. He had no answer, however, to their question of how he would finance his dream. Fortunately, the people of Harrisonburg, Virginia, his hometown, rallied around him as local businesses, charitable organizations, medical groups and individuals donated money to pay for his training.

“I did that for years and in March of 2006, I had the amazing honor to walk into the Olympic Stadium in Torino, Italy, in front of 30,000 people — including my mom and dad — for the opening ceremonies of the Paralympics. I’ll tell you that walking into that stadium was the most beautiful walk of my life,” Sundquist said.

“I’m very fortunate that my journey as an athlete has actually continued in the last couple of years,” he explained. After pointing out that he has played as a member of the U.S. Amputee Soccer Team at the Amputee Football World Cup in Mexico as well as matches in Central America and Orange County, California, Sundquist turned suddenly philosophical.

“Which means,” he said, “if you think about it, that I got to be on a travel soccer team after all.” He paused for a moment, waiting for the applause to die down before segueing to what he said was probably the most important point of all: “Sometimes the uniform we get in life is better than the one we thought we wanted.” 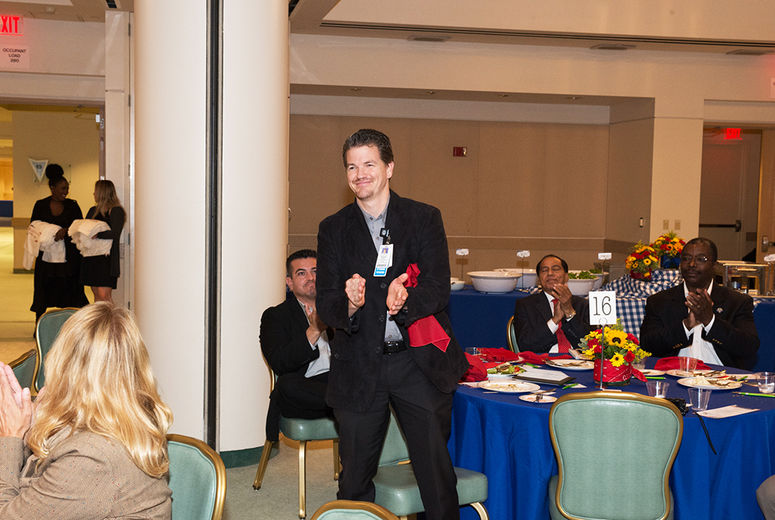 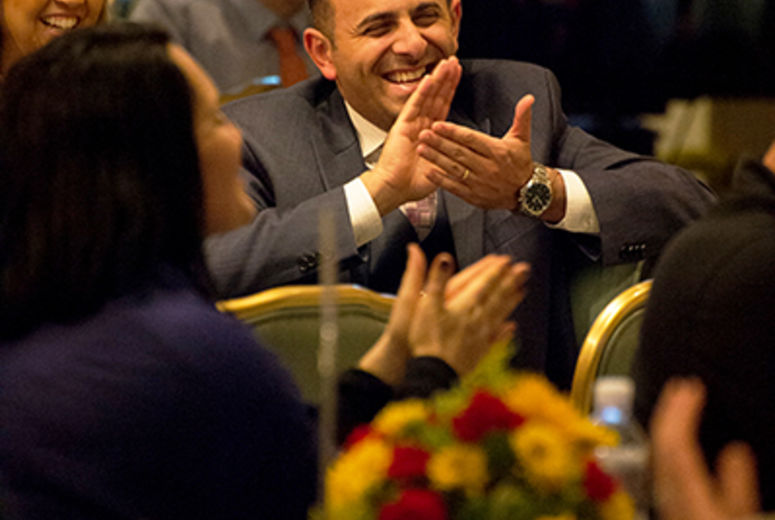 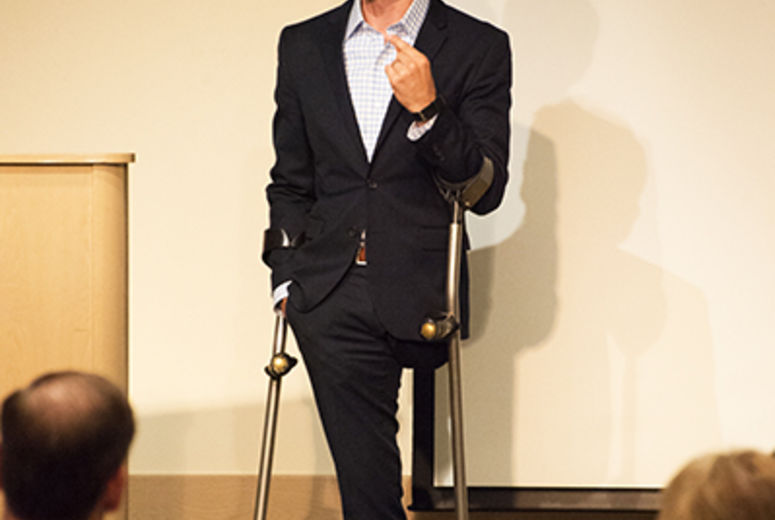 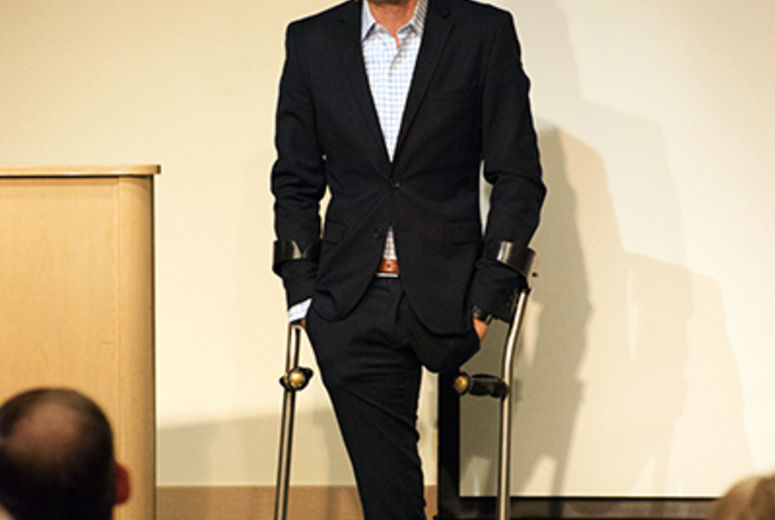 . . . about his life as an amputee and athlete during the 2017 Paralympics Luncheon. 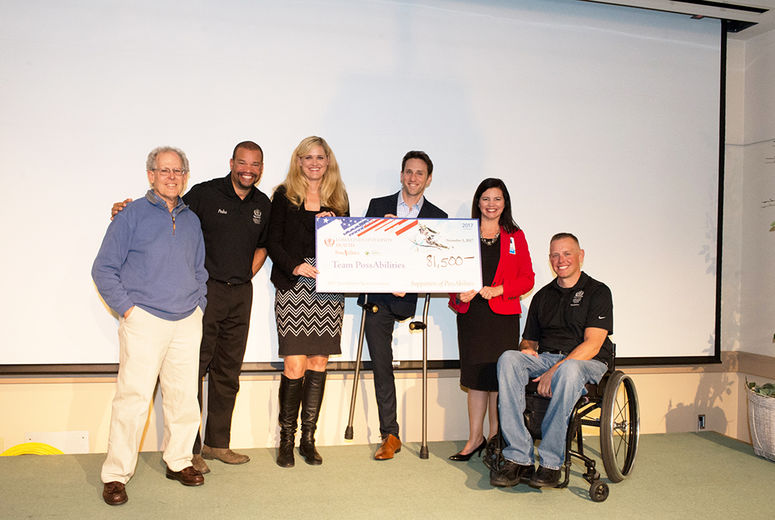 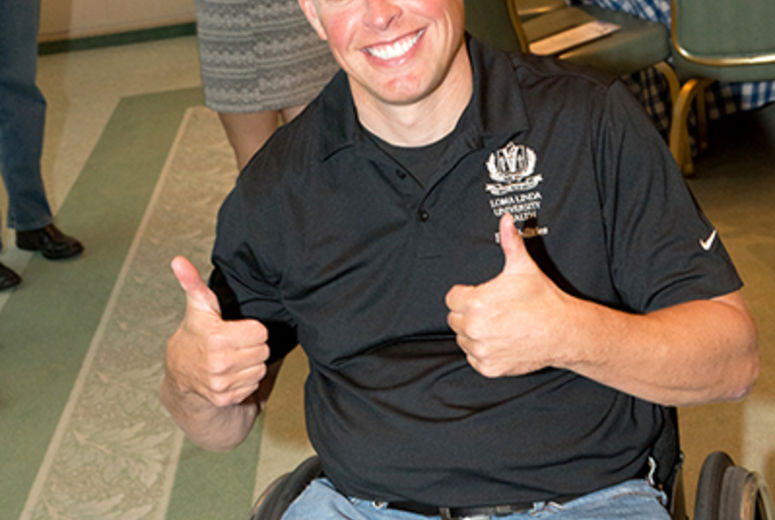 Christopher Sproule, a member of Team PossAbilities, celebrates after learning that the 2017 PossAbilities Sports Luncheon raised $81,500 to enable athletes like himself to train for Paralympic competition. 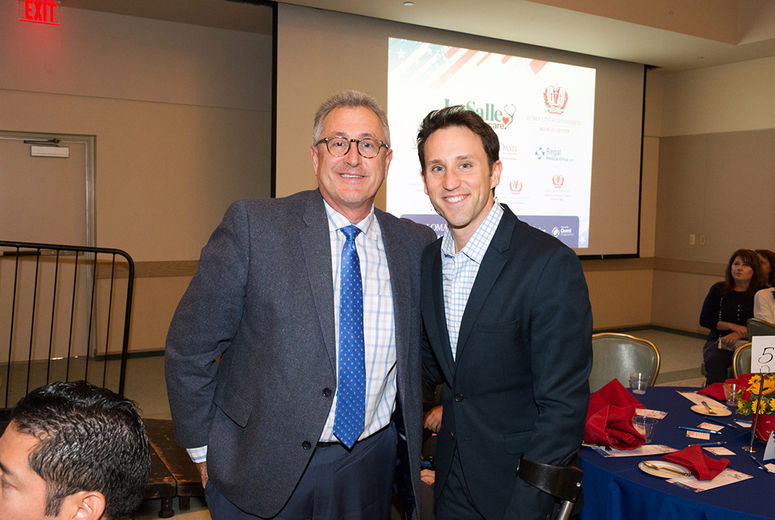