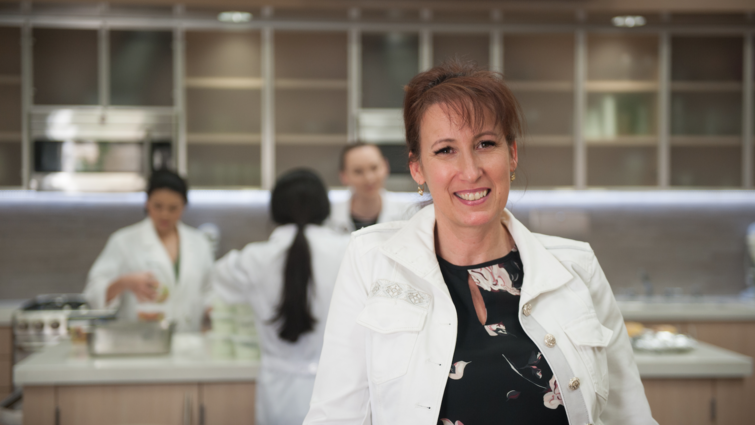 Unlike her famous namesake, Betty Crocker, MPH, RDN, director of child nutrition services for the Redlands Unified School District, doesn’t write cookbooks. She is, however, passionate about feeding hungry children.

The Loma Linda University School of Public Health graduate is on a mission to make sure every child in her jurisdiction — which includes Highland, Loma Linda, Mentone and Redlands — has access to healthy food year-round.

“It was serendipitous that the district selected me to be its director,” she says, citing her passions for ending hunger and childhood obesity.

Currently working on a doctorate at the School of Public Health, Crocker lives by the motto: “You cannot teach a hungry child. You have to feed them before they can learn.”

Nearly 60 percent of the 21,000 students in the district qualify for free meals courtesy of a federal program, she says. That translates to more than 12,500 children who depend on Crocker to feed them three times a day.

Even so, Crocker became concerned that many youth in the program would fall into the summer nutrition gap.

The gap occurs when low-income children dependent on school meals eat well during the school year, but go hungry in summer; the increased cost for families to feed their child when school is out averages approximately $300 per month — something many cannot afford. Because these children’s brain cells lack necessary nutrients for information recall and retention, they forget much of what they learned the previous school year and fall behind their peers. Crocker says this is also referred to as the summer slide and notes that it can cost districts up to $1,540 to re-teach one student struggling with summer learning loss.

Searching for a solution, Crocker contacted No Kid Hungry, a charity dedicated to ending child hunger in America. The organization came through with funding, and Crocker launched a summer meals program in 2017. That first year, it provided 11,000 summer meals. The next year, the number swelled to 55,000 meals. “It’s an honor to serve these kids,” she says. “You never know whom you get to impact or touch.” In August, Crocker was named a No Kid Hungry Unsung Hero. She was one of five in the nation to receive this honor in recognition of her summer meals program.

Crocker believes putting public health professionals in charge of feeding hungry children makes sense. “Hunger is one of those invisible things,” she says. “Most folks don’t see it, but I’ve studied this and I know the need firsthand. I am able to put systems together to impact the children in my district.”

Many of the children Crocker serves are homeless. Since tardiness and absenteeism are rampant among homeless youth, they often arrive too late for breakfast. Crocker and her team are developing a non-perishable breakfast that can be served whenever they show up. “Those kids are not going to go to the classroom hungry,” she vows. “Otherwise, the odds would be stacked against them right from the beginning.”

Crocker is equally passionate about childhood obesity. Citing environmental and genetic factors as the two main causes, she lists homelessness, food insecurity and a lack of breastfeeding in that first category.

“Many women prefer the convenience of infant formulas,” she says, “but breastfeeding is protective against childhood obesity.” Genetic factors are harder to combat, but Crocker says obesity often begins in infancy.

Her interest in childhood nutrition stems in part from a secret Crocker’s mother kept from her as a child. “My mother was a food-insecure woman,” she says. “She would eat broth soup so my siblings and I could have food. But we never knew that.”

Crocker insists hunger is often overlooked in discussions about the school-to-prison cycle among poor children. “Nobody’s really looking at food insecurity as a correlation, but it’s a really big factor,” she says.

Again, she shares a personal example. As a child, Crocker ran around with her three cousins, who were from a low-income family and almost always hungry. Their first crime was stealing food.

Tragically, the cousins, who became career criminals, all died within the past few years. Something one of her cousins told her haunts Crocker to this day. “If they would have had those feeding programs when I was in school,” he said, “I wouldn’t have had to steal food as a child. Things might have been a lot different.”

“I dedicate my life and career to them,” Crocker says, with a determination that leaves no doubt she will do everything possible to ensure other children avoid a similar fate.

“These kids on the lower end of the socioeconomic strata are the most vulnerable children in our society,” she says. “They need our help and support.”