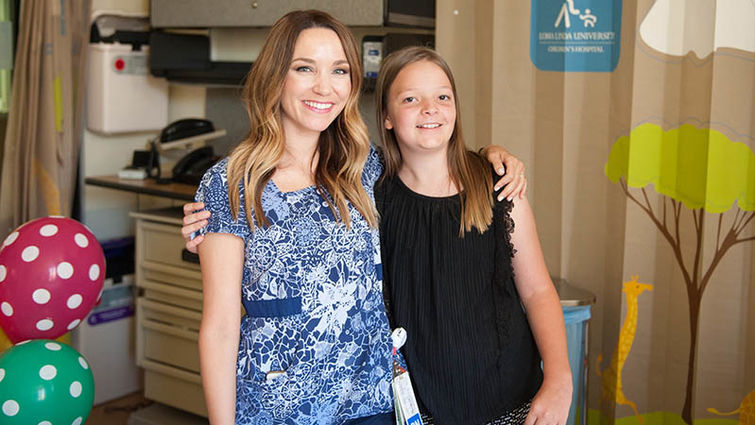 Josslyn Tramel embraces Janelle Cicero, RN at Loma Linda University Children's Hospital who stood by her side during her hospital stay.

Former patient Jossyln Tramel arrived at Loma Linda University Children’s Hospital the other week to make good on a promise more than a year in the making. With mom and twin siblings by her side, 10-year-old Tramel took her first steps back on the unit floor where her life was saved last year following an electrocution accident in a pool.

Her arrival was met with warm hugs, smiles and balloons as unit 5700 welcomed Tramel back. Janelle Cicero, RN, was by Tramel’s side during her hospital stay and beamed at the sight of her walking on her own.

“It’s amazing how far Josslyn has come,” Cicero said. “This is truly a blessing to see her after a year.”

Though her ability to walk and even jump on her own was incredible to witness, it was Tramel’s growth spurt that first took Cicero by surprise.

“I’m taller than a 23-year old,” Tramel exclaimed while standing back-to-back with her former nurse.

The visit brought fun surprises for both Tramel and staff. She handed out homemade thank you cards to each team member who cared for her during her eight days at the Children’s Hospital. Her mother arrived with a cart full of sandwiches from Panera Bread as a sign of her appreciation.

“If Josslyn survives this, I promise she will walk through those doors on her own two feet to thank everyone who helped her,” Tramel’s mother, Kim, said. Given Tramel’s poor condition at the time, few people believed the Tramels would ever be able to make good on such a promise.

Cicero and team had their own bag of goodies to give Tramel and her siblings, Calista and Nate, who also took part in the festivities. They were thrilled to receive new coloring books and crayons. Tramel opened a gift created just for her — a stuffed bunny dressed as a Loma Linda University Health nurse. When Tramel pressed on the bunny’s hand, she was overcome by the heartfelt message: “Joss, Loma Linda’s PICU loves you. We’re so happy you’re better.” She held her new friend close to her heart.

But the gifts didn’t end there; Tramel also received a beautiful necklace to complement her cheery disposition. Though overcome with happiness, it was difficult for her to recall the time she was a patient at the Children’s Hospital. Cicero took Tramel to one of the vacant rooms on the floor to try and jog her memory. It was still tough for her to remember, considering she arrived and left in a coma. Her mother said she will always remember the two times her daughter had to be revived.

“They never gave up on her,” said her mother, Kim.

Last year on Easter Sunday, Josslyn and her family were enjoying the holiday weekend at their Palm Springs residence. Family and friends were enjoying each other’s company, with most of the party goers in the pool. What was just another family function took a turn for the for the worse when those swimming in the pool began to be electrocuted by faulty wiring, including Josslyn. Her father, Jim Tramel sprang to her rescue.

Josslyn was immediately transported to the Children’s Hospital pediatric intensive care unit as the fight for her life began. While transported in a helicopter, Kim remained at her daughter’s side offering her support and love. Though fearful for her daughter, it was devastating for Kim to learn 30 minutes prior to arriving at the Children’s Hospital her husband — Josslyn’s father — had passed away.

“I don’t know if my kid would have survived anywhere else. They held her hand and mine through a very difficult time,” Kim said. The staff cared for her daughter not just as another patient, but like family and loved like family. Even her twins at the time were looked after by Cicero and team. “If I had to do something or even step away, I knew Janelle was going to be there.”

Tramel was eventually transferred to the University of San Francisco Medical Center pediatric intensive care unit, where she remained until her health improved and moved into rehabilitation for the remaining three months. The move was to bring her closer to home.

Throughout Tramel’s recovery process, her mother kept in touch with Cicero and nursing staff.

The family was in town for the day after flying in from San Francisco. Tramel and her siblings were excited to soon drive to San Diego for one last summer vacation before school starts Aug. 28.

Tramel will return to school as a healthy, active fifth grader. Her mom said she’s a different kid now because of her experience, but she hasn’t lost her spirit for life, creativity and artwork. And while the family made good on one of mom’s promises after Tramel pulled through, she hasn’t forgotten about another one of mom’s promises — a trip to Paris! 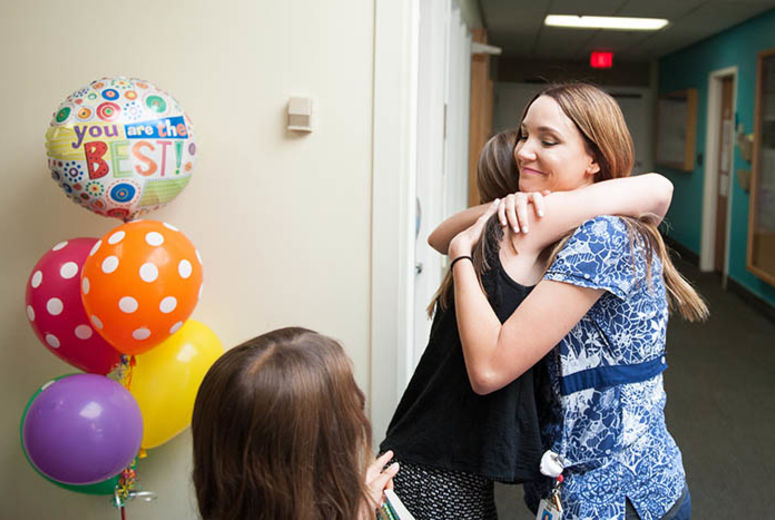 Tramel gave Janelle Cicero, RN a warm hug as she arrived at the Children’s Hospital. 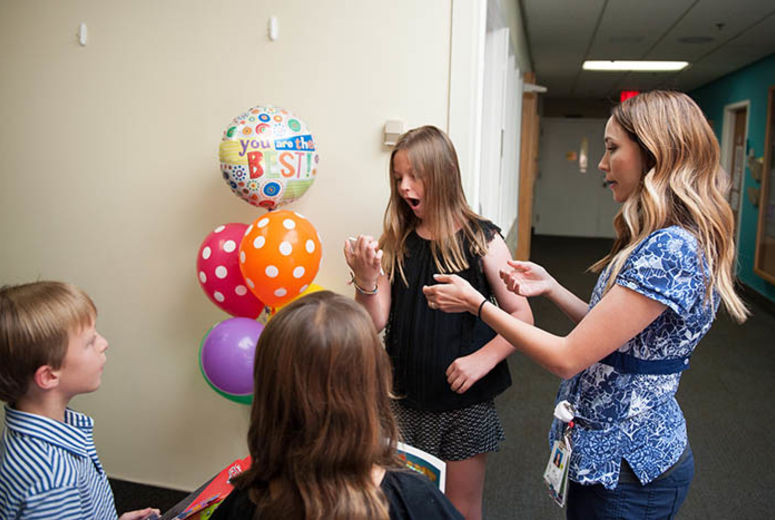 A necklace was given to Tramel from Cicero and staff. 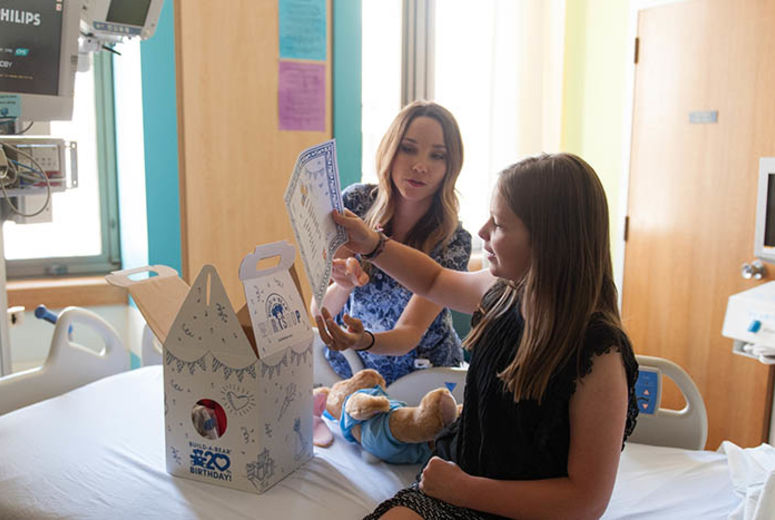 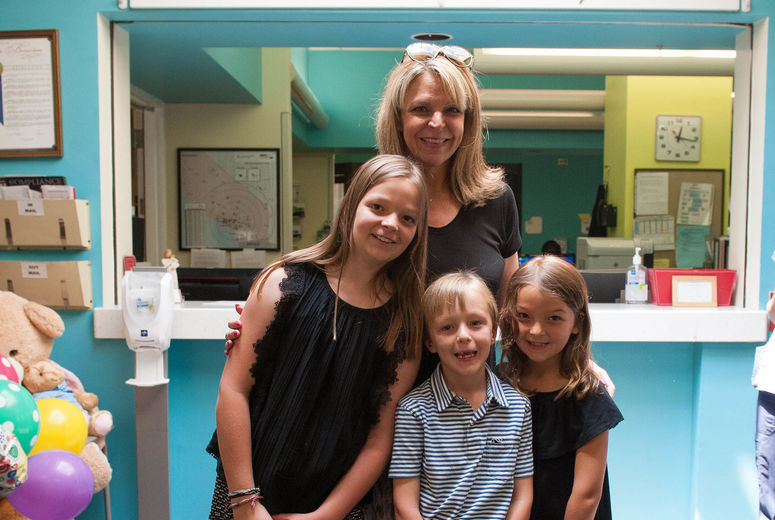 The visit to the Children’s Hospital was filled with smiles and laughter for the Tramel family.