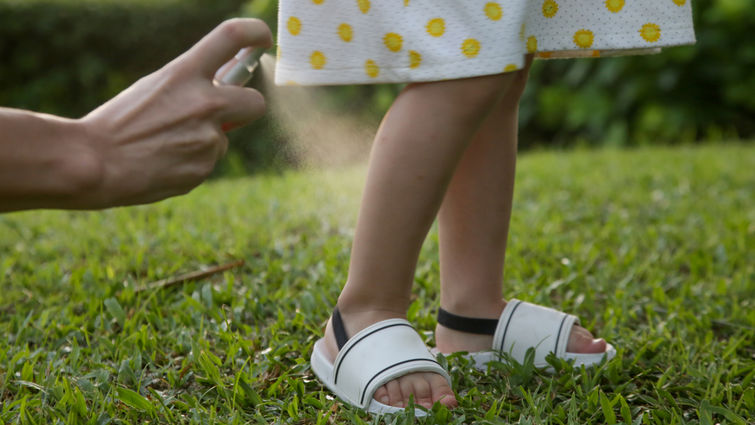 Dr. Allison Hensley encourages parents to use a safe form of insect repellent to protect kids from mosquito- and tick-born illnesses.

Warmer weather signals the opportunity for kids to play outside and the chance for families to do more activities together outdoors. However, warmer temperatures also signal the need to fight off reemerging bugs like mosquitos and ticks.

Allison Hensley, MD, a general pediatrician at Loma Linda University Children’s Hospital, says using some type of insect repellent on kids is important and not just because insect bites can be annoying.

“I think some form of insect repellent is often necessary because, depending on the area, there are many mosquito- and tick-born illnesses that you would want to protect your child from,” Hensley says.

Hensley says in general, it is safe to use most insect repellents on kids over the age of two-months-old.

The Centers for Disease Control and Prevention (CDC) encourage the use of Environmental Protection Agency-registered insect repellents. When these repellents are used as directed, they have been proven to be safe and effective.

For babies under two-months-old, Hensley recommends using a protective netting to cover their carrier or car seat.

“There are some natural insect repellents that don’t have these chemicals in them,” Hensley says. “While they have been deemed safe, they are not scientifically proven to be effective. Some may help deter mosquitoes, but they may not be as effective as the medicated versions.”

Another natural pest deterrent is long clothing that your child wears — for example, when they’re headed outdoors, have your child wear long sleeves, long pants, high socks, and a hat.

Hensley reminds parents to be cautious of proper application of insect repellent on their children. “You need to read the label and make sure you’re following the directions properly,” she says.

Insect repellent should only be applied to exposed skin and/or outer clothing. Avoid contact with the eyes and mouth. “If you do want to apply it to your child’s face, spray a little on your hands and rub it into the exposed areas of their face, still avoiding the eyes and mouth,” Hensley says.

Hensley lists some things for parents to avoid:

Severe reactions to insect repellent in kids are rare; however, it could happen, says Hensley.

If your child develops an allergic reaction to the repellent, such as a rash, Hensley says to wash the affected area with soap and water, call the Poison Control Center for advice, and, if there is a significant skin reaction, contact their pediatrician for an evaluation appointment.

Additionally, if your child swallows insect repellent, rinse their mouth, have them drink water, and contact their physician or the Poison Control Center at 1-800-222-1222.