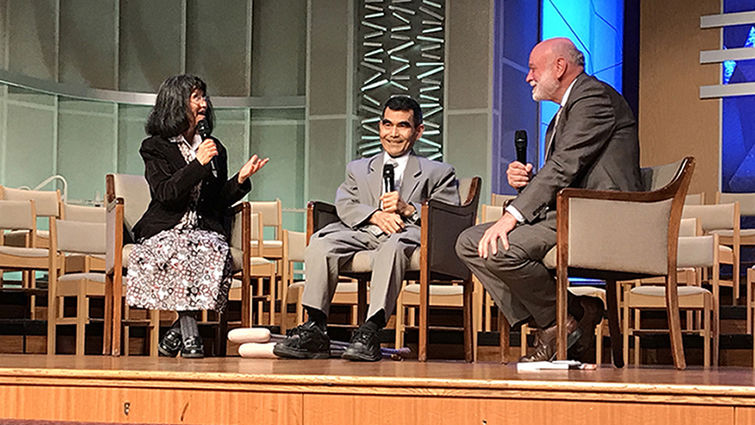 Meeting this evening in the Loma Linda University Church, these “Unsung Alumni Heroes” were showcased as a sample of Loma Linda University Health’s rich history of alumni, faculty and staff who have helped to further the organization’s mission of continuing the teaching and healing ministry of Jesus Christ.

The Gift of Tenacity

Yoshinobu Namihira, MD, FACG, was a young boy living with his mother and two siblings on Yonaguni Island, Japan. And that family was in crisis.

His parents were divorced. And in 1953, in Japan, his father’s desertion brought shame and devastation upon his family. Namihira’s mother, Shizu Yonaha, was desperate.

Namihira said his mother’s situation was “like a shipwreck, a disgrace.” In her despair, Yonaha was literally at the brink of drowning herself and her three children in the East China Sea. As they walked to the ocean’s edge, Namihira recalled his mother suddenly stopping and looking in her children’s eyes.

“No, it’s not fair,” she said, referring to the community’s disapproval. And the family turned around to a new life.

Shizu Yonaha arranged to have her parents care for her three children, while she attended nursing school for three years in Okinawa. Returning to Yonaguni Island after graduation, Yonaha opened that small island’s first public health office, and for 30 years worked to eradicate diseases like polio, malaria, tuberculosis and leprosy. She ultimately was honored for her public service by Japan’s emperor and secretary of state.

While his mother’s life made the value of education evident to Namihara, she also passed along simpler lessons to her children. “What we learned through my mother’s actions was ‘love your neighbor first,’” Namihira said. “Through our hardships, financial strain and difficulties, we gradually ingrained in our minds a love for others and care for the unfortunate.”

Namihira had contracted polio as an infant. After surgery and hospitalization as a teenager, he decided to become a physician, despite some physical limitations.

“I made a decision that if I ever became a physician, I would dedicate myself to helping people who could not help themselves,” Namihira said.

Namihira’s education path brought him to southern California, where he attended Ambassador College as a foreign exchange student. He then attended Loma Linda University’s La Sierra campus as an undergraduate, then going on to graduate in 1980 from the School of Medicine. He ultimately settled in Vicksburg, Mississippi, where he practices internal medicine and gastroenterology.

Along with his busy medical practice, Namihira holds well-attended health promotion lectures monthly. His topics include the value of water, a series on diet, and discussions of colon cancer.

“In 1952, I should have been dead and gone. My mother thought I would not make it,” Namihira said. “But thanks to my mother’s love, I am still alive and kicking. There must be a purpose for my life.”

Mieko Namihira, Yoshinobu’s wife, performed “Amazing Grace” on the piano to conclude their story, as a tribute to God’s leading in their lives.

The Gift of Family

Mary Ann Wells and her husband Steve lived in Yucaipa, Calif. They had raised three adult children, and the couple enjoyed their beautiful grandchildren as frequently as possible. Life was good.

“She was the cutest little peanut,” Wells said. But Sophia weighed less than four pounds and suffered from gastroschisis. She was born with her intestines outside of her abdomen.

Sophia faced several surgeries over the coming months, and spent time in isolation. But Wells hovered over Sophia, hugging her and singing to her whenever possible.

During next 11 months, Sophia’s biological mother was an inconsistent presence, a gap Wells tried to fill. When the day came for Sophia to leave the hospital, she went home to her biological mother.

As Sophia recovered both in Children’s Hospital and later at a pediatric sub acute center in San Bernardino, Wells continued to be a regular presence. During this time, Wells and her husband Steve applied to be Sophia’s foster parents, even gaining approval for the arrangement from Sophia’s mother and other relatives.

Wells left her position at Children’s Hospital in spring 2011 to devote full time attention to Sophia’s health challenges. Three years later, the couple, both now in their sixties, became Sophia’s legal guardians and ultimately adopted her into their family. Throughout the legal and financial challenges of the process, Wells said she kept her focus on God to help her make good decisions.
“I’m just a nurse who didn’t want to see this baby die,” she told attendees in University Church. “It’s been the hardest season of our lives, but God has been so faithful.”

“When it was time to make the decision about this adoption, I knew in my heart it was the right decision,” Steve Wells said. “Everything God puts in your life, you know it’s there for a reason. I told Mary Ann ‘we have to do whatever we have to do.’ I would do it over again four more times, because life is precious. Sophia needed a home and stability.”

The Gift of Courage

During the 12 years that the United States military has fought the war in Afghanistan, Dilip Joseph, MD, MPH, had come to know that country in a way that few have. For four and a half years, Joseph (School of Public Health, Class of 2000) had made 12 trips to Afghanistan for the Morning Star Development, a non-profit organization that provided medical care and training deep within war zones.

While Joseph had always been aware of security issues, his 12th trip suddenly brought him face to face with the Taliban. Joseph, along with two Afghan colleagues, was returning to Kabul after working in a rural clinic. Driving down a mountain road on December 5, 2012, the team was confronted by an armed man. A warning shot was quickly followed by the appearance of more men with guns.

Joseph and his two colleagues were moved to a remote place off the road. As the Taliban searched the car and the men’s belongings, they came across Joseph’s U.S. Passport. That, Joseph said, changed things dramatically.

Now captives, the trio was taken to a remote valley, where they were forced to make a 9-1/2 hour hike. As they moved along, Joseph first began to realize that he might die.

The group reached a remote shack late that night. Soon, the kidnappers decided to demand $300,000, or the captive trio would be taken to Pakistan to be killed. Joseph called his Kabul office to relay the demands. But on the second day of negotiations, the cell phone service failed. At that point, Joseph and his captors began talking to each other.

“They had questions about what my life, my family and my career were like,” he said. “One of the captors began to share more about his life.

“I told the young man I was old enough to be his father,” Joseph said. “He started comparing his life to mine.”

“I think you do what you do because this what you’ve been exposed to. You like helping people,” the young man said. “I do what I do because this is all I’ve seen. I was five when I first killed a person.” He had only known his father for five years. The other 14 years the father had been in prison. Joseph continued to connect to his captors through conversations about family, career, and education during the following three days.

Cell phone service was restored, and ransom discussions continued. Ultimately, negotiations for the group’s release broke down, and the Taliban captors decided to split up the trio.

“I felt this was the last time we would see each other,” Joseph said.

Four nights into his captivity, Joseph was being held in a small, pitch-black room. Suddenly noises began outside — a dog barking, then sheep crying. Then the gunfire began. A man burst through Joseph’s door, a U.S. Navy SEAL. Although Joseph’s Taliban guard fatally shot that rescuer, other SEAL team members called out to Joseph, and he was soon rescued.

“The SEALS took out most of the rest of the captors. In a few minutes it was over,” Joseph recounted to the audience. A helicopter arrived and carried Joseph and the SEALS to a military base.

Reflecting on the experience, Joseph said he came to understand that even the Taliban could be reached. “The last thing I expected was that the Taliban would be so open. The desperation they have is the same desperation I feel when I think about hope or change or love in my own life,” Joseph said. “What truly makes man whole, and what’s my role it that? If I have hope, how do I instill that hope to others. It doesn’t take a lot of effort to instill hope, even a very dark place. It’s the little things that make a difference. We have to spend time with people and get to understand them.”