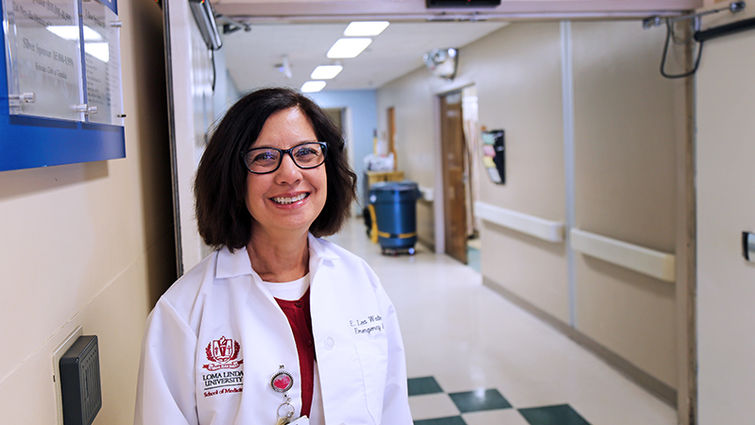 Just as emergency department staff rush to treat casualties after a multi-car accident, they are prepared for an increase in patients as outdoor temperatures spike.

“Throughout the summer, our bodies acclimatize to the hot weather,” says Lea Walters, MD, medical director of the emergency department, Loma Linda University Health. “For this reason, the first extreme spikes in heat every year affect people of all ages more severely than experiencing hot weather later in the summer.”

When patients arrive in the emergency department with symptoms of heat stroke, immediate steps are taken.

“Patients with heat stroke are cooled using external and possibly internal methods,” says Walters, “started on IV fluids and may even need intubation [a tube inserted into the trachea], depending on how sick they are. Cooling and fluid replacement are the priorities, then supportive measures and treatment of any other abnormalities that are identified.”

...the first extreme spikes in heat every year affect people of all ages more severely than experiencing hot weather later in the summer.Lea Walters, MD

Heat emergencies can be fatal. “Patients with severe ‘heat exhaustion,’ — for example dehydration with any electrolyte abnormalities or muscle breakdown — will be admitted to the hospital,” cautions Walters. “Every heat stroke patient is admitted, probably to the intensive care unit.”

While seniors, children, and those living with chronic health conditions may develop symptoms earlier as temperatures rise, everyone, including seasoned athletes, is at risk. “I would advise against training during the hottest parts of the day,” she says, “and yet I often see bicyclists and runners in the middle of the day.”
According to Walters, people who are taking blood pressure, allergy or psychiatric medication often don’t realize that high temperatures may impact them more.

To avoid heat stroke, Walters urges everyone to be watchful for symptoms including dehydration, headache, nausea and profuse sweating.

“As time passes, persons with heat stroke may become so dehydrated that they are unable to sweat or may sweat less, and may urinate less,” she says.

There are several steps that can be taken to avoid heat stroke.

- Limit outdoor activity during the hottest part of the day; don’t try to be invincible.
- Stay out of the direct sun.
- Drink fluids; if you are sweating, drink fluids that contain electrolytes.
- Drink before you feel thirsty.
- Make use of air conditioning.
- If you begin to feel symptoms, shed layers of clothes; dampen a cloth and sit near a fan.
- Seek shelter where there is AC: if you don’t have it at home: shopping malls; grocery stores and the library
- In L.A., Orange, San Bernardino and Riverside counties, call 2-1-1 from any phone for a list of cooling center options. Tips: call the center in advance to make sure seating is available; if the center you want is at capacity, check online for additional centers.

Following these guidelines, as well as checking on elderly family members, neighbors and friends will help bring fewer patients with heat-related symptoms to the emergency department, which is a goal Walters and every emergency department physician hopes for.