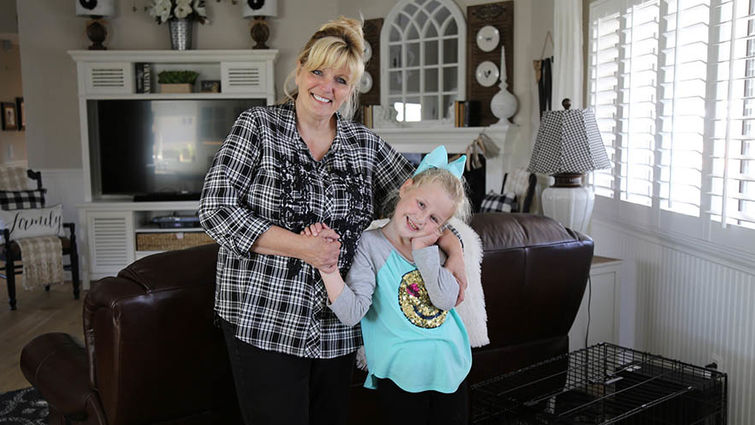 The holidays are just around the corner, and for eight-year-old Sophia Genesis Wells, this season brings plenty to celebrate. While most kids are making their Christmas lists, Sophia has already received the greatest gift of all — adoption.

Sophia was officially adopted on Nov. 4 by Mary Ann and Steve Wells of Yucaipa. Her ‘nana’ and ‘papa’ became her parents after a three-year emotional adoption process.

Mary Ann and Steve Wells are both in their sixties. They have three adult children whom they love and adore, in addition to their beautiful grandchildren. But, when Sophia came into Mary Ann’s life in 2009, adding one more member to the family seemed inevitable.

While working at the Children’s Hospital neonatal intensive care unit (NICU), Mary Ann came across a beautiful baby named Sophia. “She was the cutest little peanut! I remember looking at her and saying she’s so cute,” Wells said.

Sophia was no ordinary newborn. She was born April 3, 2009, weighing less than four pounds. She suffered from a rare condition called Gastroschisis, in which her intestines were born outside of her abdomen. At approximately one week, Sophia underwent her first surgery, one of many to come. Due to the complexity of Sophia’s condition and a severe infection, she was put in isolation following her second surgery at two months old. For the next five months, Mary Ann bonded with the infant, hugging and singing to her every chance she got.

“I would visit and call on my days off to see how Sophia was doing,” Wells said. She even laundered Sophia’s blankets and pajamas. A connection between the two began to form.

Though Sophia’s biological mom was there at the hospital, her presence was not consistent. Mary Ann tried to fill in the gap during Sophia’s 11-month stay at the Children’s Hospital. In fact, she cherished the day Sophia was finally able to go home with her biological mother. “I was able to carry her outside and put her in the car seat,” Wells recalled. “She had never been outside, and when the wind hit her face she had this look of puzzlement to her.”

It was just two weeks before Sophia returned to the hospital. For the next five months, she was re-hospitalized to various complications, including an infection in her central venous line. Child protection services was notified on many occasions and proceeded to remove Sophia from the custody of her biological mother.

“As soon as I would pop my head around the corner, she would laugh,” Wells said.

Mary Ann could see the transition to the subacute was tough for little Sophia. She remained in the subacute hospital from September 2010 until she left on Jan. 10, 2011. If her health was going to progress, Sophia would need close care. In the fall of 2010, Mary Ann and her husband decided to apply as Sophia’s foster parents, following the permission of her biological mother. At the same time, maternal great-grandmother and maternal grandfather were also in agreement.

It wasn’t long before Mary Ann took a leave of absence in January 2011 from her nursing position at the Children’s Hospital. She had no idea just how much care Sophia would need, but it didn’t matter to her — she just didn’t want to see Sophia die. “The Lord had a plan and purpose for Sophia,” Wells said.

By April 2011, the Wells suffered a few family hardships, among them the loss of Mary Ann’s father-in-law from a massive heart attack and the hospitalization of her mother-in-law. Mary Ann came to a point where she had to make a decision about what was best for Sophia. She knew resigning from her job was the hardest thing she would ever have to do, but it meant she was all in for Sophia.

She slept in the bed next to Sophia’s crib for the first nine months she was home. “Lots of sleepless nights, but incremental progress in Sophia’s health,” Wells said. Sophia was gradually able to tolerate the formula feedings through her jejunostomy tube (J-tube). Mary Ann and Steve’s commitment to Sophia gave her the hope for a normal life.

A day of celebration

To celebrate Sophia’s adoption, the family walked from the Riverside Superior Court to the historic Mission Inn in Riverside. Her brother, sister, aunt and parents all celebrated the big day. “I was crying so much,” Sophia said. “I believe God sent angels over me to protect me.”

She was treated to a plate full of delicious desserts, including chocolate covered strawberries, a chocolate Bundt cake, cupcakes and whip cream. On the plate of goodies, were the words ‘Happy Adoption Day!’

It was emotional for Mary Ann prior to the adoption, just 30 days earlier. “As I was signing the papers as a prospective adoptive parent, I was overwhelmed by God’s goodness,” Wells said. “Sophia was finally going to be safe and was going to be ours.”

The journey has been long for both Sophia and her new parents. In fact, Mary Ann and Steve filed for the adoption in September 2014. They spent $100,000 in legal fees, private investigators and other services to secure Sophia’s adoption. According to Mary Ann, the fees are typically not this high, but were in relation to the complexity of the case.

Mary Ann recalls her husband Steve’s motivation to help Sophia. He told her, “We have to adopt Sophia to keep her safe.” Mary Ann looked to her faith in God to help make the right decision.

“I’m just a nurse who didn’t want to see this baby die,” Wells said. “It’s been the hardest season of our lives, but God has been so faithful.”

The Wells family is looking ahead to the next couple of months. They’re going to the Grand Canyon and Red Rock, where they will take a nature tour and go bowling. The spunky, always-smiling Sophia happily pointed out, “We’re still going bowling, even though it hurts my mom’s knees.”

In addition to her upcoming family trips, Sophia is looking forward to baking homemade cookies for her parents, half-sister and Elfis, her Elf on the Shelf. “One time we baked cookies and I found crumbs near the refrigerator,” Sophia said. “Elfis was in there with the cookies.”

The third-grader enjoys playing Legos, drawing and playing on her iPad. She is a huge baseball fan and enjoys watching her favorite team the Los Angeles Angels. Sophia's biggest wish in life would be for Mike Trout to autograph her baseball bat!

Her favorite subjects are art and science. When she told her class the wonderful news of her adoption, her excitement couldn’t be contained. “I was jumping around in my seat,” Sophia said.

Sophia is also celebrating her new middle name — Genesis. After attending her Bible study class, Sophia met another little girl named Genesis and thought it was a beautiful name. When Mary Ann and Sophia looked up the meaning of the name, they knew it was the perfect fit. “One definition said ‘a new beginning’ and another ‘coming into being,’” Wells said. “This is the family God has planted her into.”

As for Mary Ann, Sophia has taught her that love has no bounds and perseverance is everything.

In December, Sophia and her mom will visit with her physician at Loma Linda University Children’s Hospital to determine if she is able to close up her jejunostomy (J-tube). The tube was used for many years to deliver supplemental nutrition to Sophia directly into her intestines.

A trial off J-tube formula supplementation began a year ago to see if Sophia could gain or maintain her weight by oral intake alone. “I believe she has and think the doctor will agree,” Wells said. This is the last hurdle in Sophia’s eight-and-half year journey since being born with Gastroschisis.

Sophia is not a fan of the word ‘surgery,’ and rightfully so. The precocious eight-year-old has endured nine surgeries in her young life. Her mom reminds her that she is the strongest and bravest kid she knows.

In the meantime, Sophia does have your eyes set on one thing for Christmas — a new bicycle. 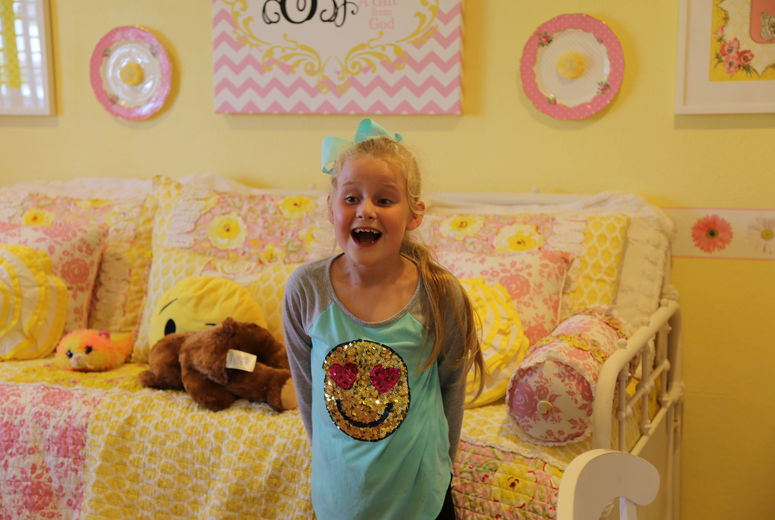 Sophia, 8, is an animated and creative little girl. 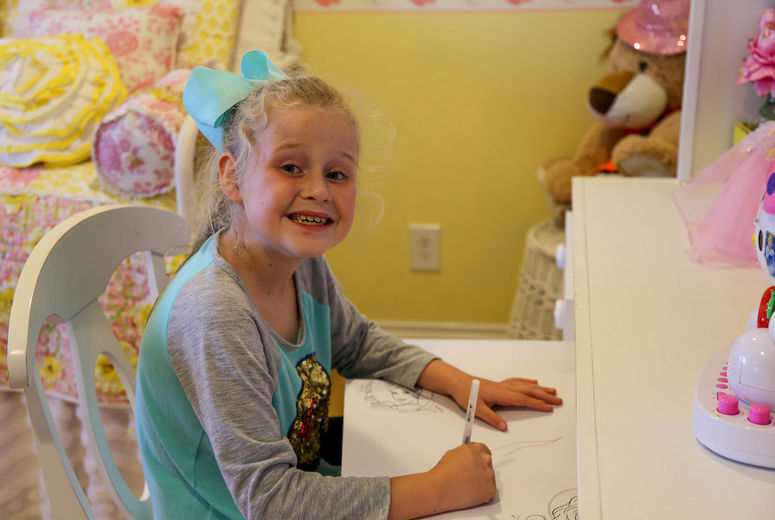