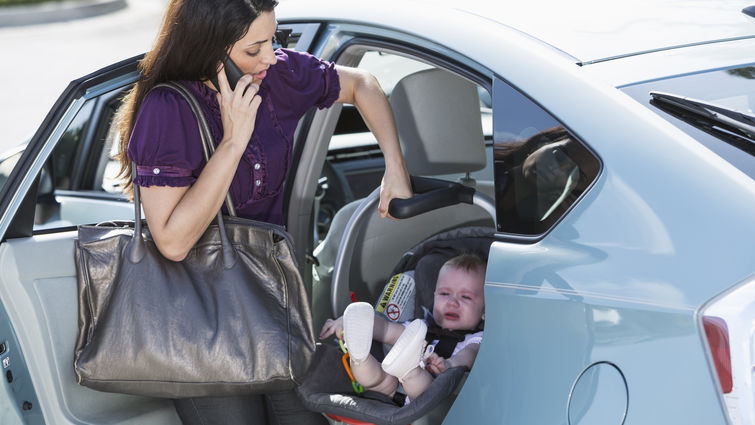 The number of kids dying annually from heatstroke after being left in hot cars has been gradually increasing since 2015, with California being in the three states with the highest fatalities, according to Safe Kids Worldwide.

“Cars heat up so quickly — 19 degrees in 10 minutes,” Parker says. “Tragedies can happen faster than you think.”

As the leading cause of non-crash, vehicle-related deaths of children, according to Safe Kids Worldwide, heatstroke is a danger to kids of all ages and especially young children whose small bodies heat up 3 to 5 times faster than a full-grown person’s body.

“When a child’s internal temperature gets to 104 degrees, major organs start shutting down,” Parker says. “107 degrees is potentially fatal.”

Common symptoms of heatstroke include flushed, dry skin, and vomiting, and can quickly spiral to seizures, organ failure, and death, Parker says.

In general, what are some of the reasons kids are being left in cars?

Parents are out of their normal routine

If the parent or guardian has many errands to run, is in a hurry, or the child is simply quiet and the parent is using their phone — it can be easy to lose focus.

Kids find their way into a vehicle

If the car keys are laying out and the parent or guardian is busy, there is a chance that a curious child may find their way into a car. There is a risk they could become locked in the vehicle, fall asleep, or simply want to play a game like hide-and-seek.

They’re being left on purpose

Despite how it sounds, this is generally not malicious. The parent or guardian needs to run inside a store, the house, or the office for a few minutes, and they think it’ll be safe if they crack the windows and only leave for a few minutes. However, no amount of time is safe for a child to be left unattended in a car, according to Safe Kids. “The first hot car related death this year happened on a day when the high was 70 degrees,” Parker says.

Parker says that the best way to prevent heatstroke in hot cars in to remember to ACT:

Never leave a child alone in an unattended vehicle, not even for a few minutes. Make sure to lock your car so children can’t get inside on their own and become trapped.

Try keeping a stuffed animal in your child’s car seat when it’s empty and move the animal to the front seat as a visual reminder when your child is in the back seat. Or place your phone, purse, or briefcase in the backseat to ensure you don’t forget your child.

Visit Safe Kids online for more safety information and tips from experts on everything you need to keep kids of any age safe from preventable injuries.