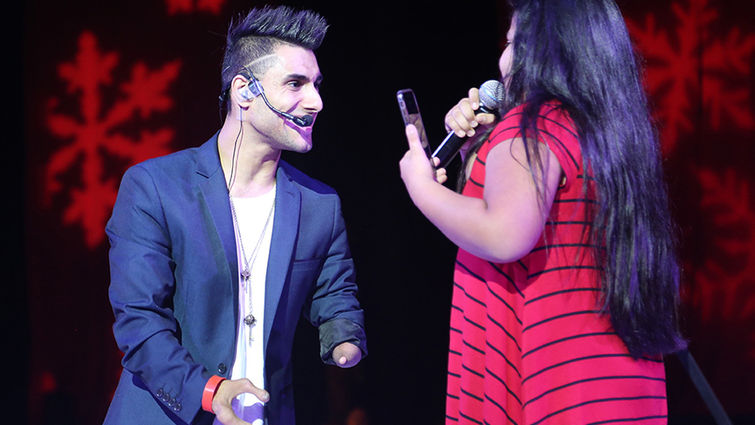 International singing sensation Emmanuel Kelly invited a young fan up on stage to sing with him during his performance at the 14th annual Celebration Dinner for the PossAbilities program on Dec. 3.

When Emmanuel Kelly took the stage at the 14th annual Celebration Dinner for Loma Linda University Health’s PossAbilities program on Dec. 3, it wasn’t just the strength of his vocal performances that endeared him to the audience. Instead, his message resonated with the nearly 1,000 attendees because, like him, many of them cope with disabilities on a daily basis.

Known around the world as a YouTube singing sensation, Kelly transcended numerous obstacles on the road to becoming the world’s first disabled — or, as he calls it, “differently abled” — pop superstar. The audience seemed especially enthralled as he revealed the philosophy that fueled his rise.

“Anything is possible,” Kelly said. “I was told, five years ago, that I would never walk again because my scoliosis was the worst they had ever seen, and I’m dancing and walking.”

As Kelly personifies individuals who rise above disability, the PossAbilities program embodies the confident spirit of conquering obstacles and achieving dreams.

Taekwondo master John Kim was named San Manuel Support Member of the Year. Kim was honored for driving to Loma Linda from his Los Angeles home every Monday for the last five years to lead a stretching and exercise class for people with disabilities. Shirley Arrington, widow of the late PossAbilities stalwart Eric Arrington, said Kim is a pillar of the Los Angeles community where he runs a center that provides adaptive sports opportunities for challenged athletes.

In introducing Joshua Dotson as Member of the Year, Cotie Williams, program manager, and Emmanuel Kelly pointed out that in 2017 alone, Dotson attended more than 10 PossAbilities events, volunteered more than 300 hours and visited the PossAbilities office more than 30 times. “He and his mom drove down from Barstow each week to make sure the brochure holders are full with information about PossAbilities for our patients across the entire East Campus,” Kelly said. “He has dedicated his life to getting the word out about PossAbilities.”

The presentation that involved by far the most people was the lineup of the 2017 grant and scholarship recipients. As their names were called, recipients made their way to the stage until there was barely room for one more.

Eric Aguilar was inducted into the PossAbilities Hall of Heroes by para-triathlete Zimri Solis, who is a Hall of Heroes member since 2016. Solis unveiled a large, framed poster recounting Aguilar’s achievements. The poster will grace the walls of the East Campus rehabilitation facility. Solis said Aguilar was chosen for thriving through disability, giving back to his community and leading by example. Aguilar was born prematurely and diagnosed with cerebral palsy and two types of seizures. Doctors said he would never walk or talk nor survive beyond the age of 6.

Today, the 29-year-old Aguilar not only walks and talks, but also volunteers for several organizations including PossAbilities, where he mentors other people with cerebral palsy.

As Aguilar took the podium to accept the award, he offered a positive message: 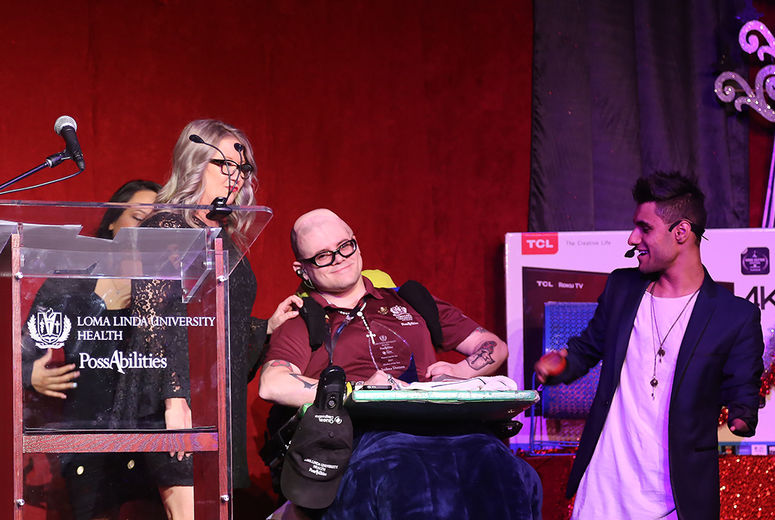 Josh Dotson (center) beams as Cotie Williams (left) and Emmanuel Kelly (right) introduce him as PossAbilities Member of the Year for 2017. Dotson has donated more than 300 hours to PossAbilities activities this year alone. 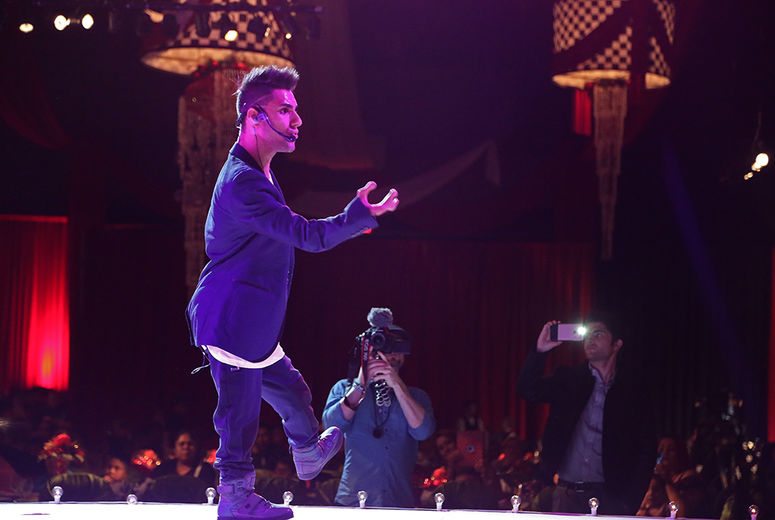 Emmanuel Kelly enterntained the approximately 1,000 attendees at the 14th annual Celebration Dinner for the PossAbilities program on Dec. 3. Kelly, who was abandoned by his parents because of multiple birth defects, is an international singing sensation. 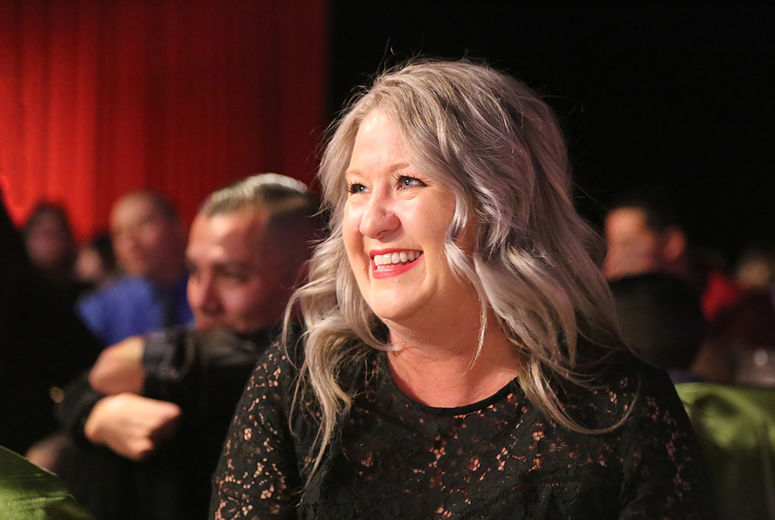 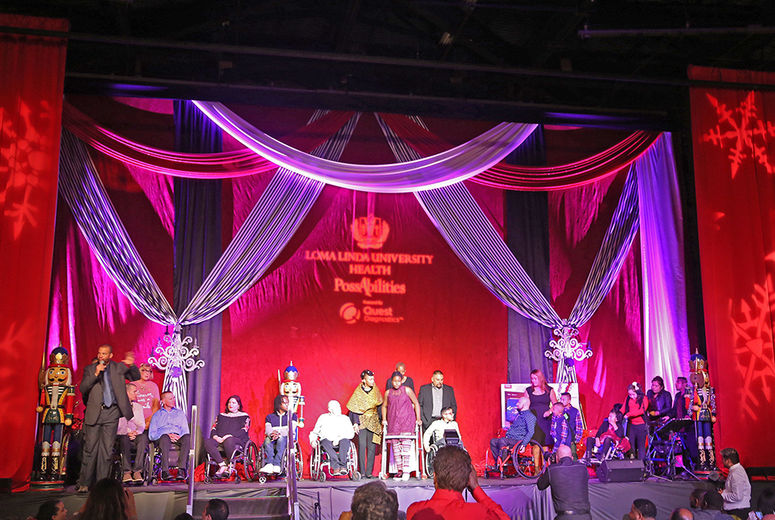 PossAbilities grant and scholarship awardees took to the stage to receive recognition for their accomplishments in 2017. Program Director Pedro Payne, PhD (at the microphone), cited these individuals for their bravery, commitment, perseverance and focus. 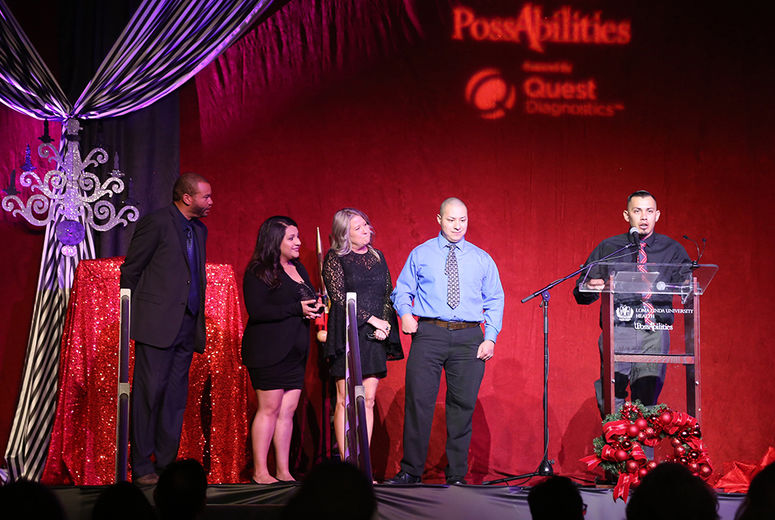 Eric Aguilar (second from right) listens as Zimri Solis inducts him into the PossAbilities Hall of Heroes. Aguilar, who was told he would not walk, talk or survive past the age of 6, volunteers to help others born with cerebral palsy.