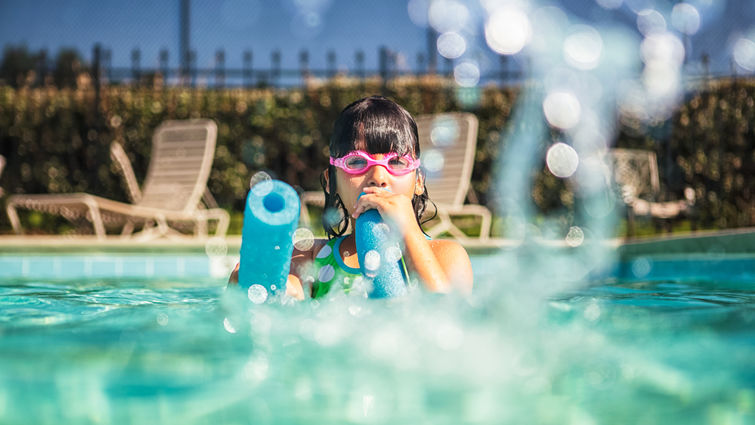 Drowning is the leading cause of injury-related death for children, with approximately 3,900 fatal drownings and 8,000 nonfatal drownings each year in the United States, according to the Centers for Disease Control and Prevention.

But what about “dry drowning”? This term has become more prevalent in health tip articles and social media over the past several years. Essentially, it refers to the idea that a child may supposedly become alarmingly sick several hours after aspirating small amounts of water — for example, they inhaled water in the pool or during their bath time.

Merrick Lopez, MD, a pediatric intensivist at Loma Linda University Children’s Hospital, says “dry drowning” is not an accepted medical term in his workplace or by the American Academy of Pediatrics. “I had no idea of the term until I had some parents bring it up,” he says. “We never use it in the pediatric intensive care unit.”

He describes a Cleveland Clinic Journal of Medicine review article that theorizes that the term went somewhat viral back in 2017 after national coverage of a story using the term after a fatality occurred several hours post-swimming. “It sounds scary, and especially with that one specific case, it can cause a lot of fear,” Lopez says. However, the article describes myocarditis, or heart muscle inflammation, as the cause of death seen on autopsy, not at all due to drowning.

While some drowning-related injuries can show up several hours after the incident, Lopez says the sensationalized incidents of “dry drowning” can often be traced to other medical issues and not drowning.

Lopez emphasizes that for drowning to occur, there must be respiratory problems due to immersion or submersion in water or another liquid. “People and kids don’t just die out of the blue from drowning days or weeks later with no preceding symptoms,” he says.

Apart from “dry drowning,” the American Academy of Pediatrics lists other terms coupled with drowning that are not recommended for use because they’re incorrect and promote misunderstanding, including “wet, dry secondary active, near, passive, and silent drowning.”

Lopez says those terms haven’t mattered in the ICU when a child comes in from drowning because teams are focused on the severity of the situation and the prevention of any additional damage to their brain. “The fact that they are coming to me in the ICU means that they have drowned — period — and are critically ill,” he says. “When they come to the hospital, these terms do not provide any clarity on their overall situation. What matters most to me is how long their heart has stopped or how long they needed CPR.”

Still concerned? Here is a breakdown of common symptoms and why

It’s normal for kids to be tired and worn out after they’ve been swimming. If a drowning event has not occurred or the child didn’t go underwater, there’s generally no need for concern. They are tired from the exertion and exercise.

If a child is vomiting after swallowing a lot of water, this isn’t a sign of drowning.

Kids can choke on water after it “goes down the wrong pipe,” may cough, and may have some shortness of breath. There is almost no risk to the child if their issues resolve in several minutes. However, talk to your doctor if a drowning event occurs and the coughing is present immediately following or after several hours of the drowning event.

Kids who’ve gone underwater during a drowning event may develop fast breathing immediately after the event or several hours later. They need to see a doctor.

Ultimately, dry drowning is not something doctors use, or parents should necessarily be concerned with, says Lopez. “It distracts from the bottom line, which is drowning can be deadly, and the most important tool for treating any kind of drowning is primary prevention.”

Most drownings occur in pools, hot tubs, and spas. However, with the summer months bringing no school and weeks of heat, Lopez emphasizes the need for parents and caregivers to stay prepared and alert.

“The American Academy of Pediatrics recommends swim lessons as one of the layers of overall protection against drowning, which should also include constant, focused supervision and pool barriers,” Lopez says. He explains that lessons can begin as early as one year of age, but be sensitive to your child’s development since not all children will be ready to start swimming at the same age.

“This might seem obvious,” Lopez says. “But sometimes parents and caregivers can have a false sense of security that because their child has many others around them or pool barriers, they don’t need someone to watch them actively.” Lopez encourages parents to designate a specific person to be watching their children while around water. “It’s important to remember that swim lessons or barriers don’t make kids drown-proof — a child can bump their head, have a seizure or pass out even if they have the best lessons and are strong swimmers. Also, someone may have left the gate open accidentally.”

“Floatation devices can help your child’s confidence while learning to swim and improve their odds of staying safe,” Lopez says. He recommends that any floatation devices used be Coast Guard approved.

Visit the Safe Kids website for more tips on water safety this summer.