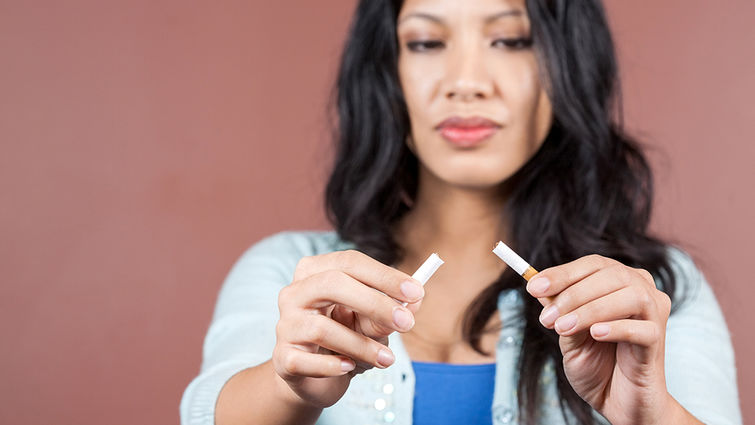 Kicking the tobacco habit is mostly a matter of learning new ways of thinking and acting.

Want to stop smoking? An assistant professor at Loma Linda University School of Public Health, says it’s a matter of conditioning the brain by new ways of thinking and acting.

Ernie Medina Jr, DrPH, has been helping smokers break the cycle of addiction for 25 years. He offers stop-smoking classes and counseling services for members of the community.

“Smoking is the number one cause of preventable death in the United States,” Medina says. “If you smoke, you need to stop.”

Here are five of his top tips for people who wish to terminate the smoking habit:

Find healthy substitutes. According to Medina, the urge to smoke is triggered by psychological cues hidden in everyday life. Boredom and repetition are two of them. “When smokers feel bored, they need to do something,” he says. “Instead of reaching for a cigarette, how about reaching for a handful of grapes or chewing gum, or going for a walk? You can replace the cigarette by doing something else with your hands.”

Try the Ziploc method. Medina says the popular brand of sandwich bags can help smokers cut down and quit smoking altogether. “Suppose you smoke a pack of cigarettes a day,” he says. “That’s 20 cigarettes. Take the cigarettes out of the package and put them in a Ziploc Bag. That way, you can see how many cigarettes you’re smoking every day and gradually cut down.” Here’s how it works: when you’re ready to cut down, put 18 cigarettes in the bag one day and throw the other two away. The goal is to try not to run out before you’re ready for bed. After a while, you’ll reach the point where you have one or two cigarettes left at the end of the day. The next week, put 17 cigarettes in the bag. Keep dropping the number to a new low every week. Knowing that you can smoke, but don’t have to, is a good motivator to quit.

Change patterns by keeping a smoker’s diary. “People seldom realize how often they smoke throughout the day,” Medina says. “I have them record it every time they reach for a cigarette. After a while, the patterns become obvious: ‘I wake up, have coffee, smoke a cigarette and read the paper.’ Or, ‘I go out on the porch to smoke first thing every morning.’ Writing it down exposes the chain of linked activities and triggers that support the smoking habit. Break the chain.” Instead of reading the paper and having a cigarette, Medina suggests taking a shower or going for a walk. If you smoke on the porch, don’t go out there in the morning. Coffee is black, so if you smoke while drinking coffee, choose milk or water or orange juice. They look different and change the daily routine established in your mind.

Get a buddy. Conquering the smoking habit is not easy. A buddy can hold you accountable and help keep track of your progress. “Set a quit date and let your buddy know about it,” Medina says. “It’s much easier than going solo. A friend can offer encouragement and remind you of why you want to quit.”

Focus on being a “non-smoker.” Medina points to a fundamental shift in the psychology of smoking cessation. “These days, we are told to think of ourselves as non-smokers rather than ex-smokers,” he says. “If your identity is, ‘I’m an ex-smoker,’ you will always be tempted to return to smoking. But if you think of yourself as a non-smoker, you won’t want to smoke.” Medina says the idea seems subtle, but represents a big difference: “The ex-smoker idea is like the Alcoholics Anonymous approach where you have to keep saying, ‘I’m an alcoholic’ and going to meetings for the rest of your life. Sooner or later, you may succumb to temptation and start smoking again. Instead, tell yourself, ‘I’m a non-smoker.’” Medina cites a biblical analogy to keep the idea in focus: “‘By beholding, we become changed.’ When you see yourself as a non-smoker, you become a non-smoker. It becomes part of your self-identity. What we focus on is very critical to what we become.”

To learn more about tobacco-cessation methods or to enroll in stop-smoking classes or counseling, contact Medina at emedina@llu.edu or by calling 909-558-8750.