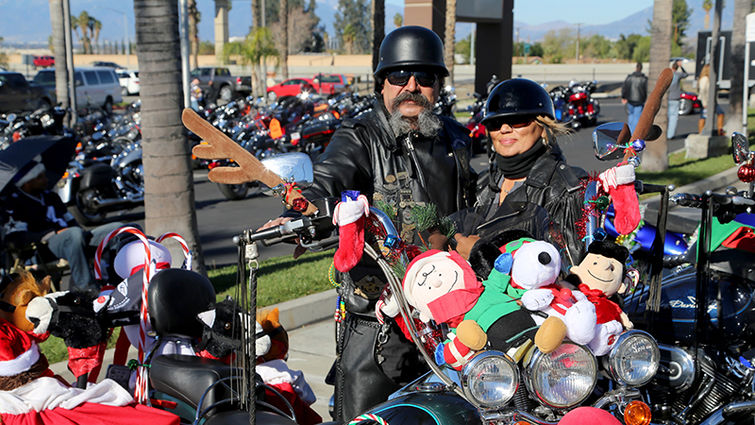 Leave it to the local motorcycle community to figure out a way to surmount an obstacle.

Faced with the prospect of not being able to ride up to the front entrance of Loma Linda University Children’s Hospital to deliver toys this year, more than 200 motorcycles and approximately 400 riders improvised to make sure Santa’s plans weren’t thwarted during the 24th annual Quaid Harley-Davidson Toy Run.

Starting at approximately 10:00 a.m. on Sunday, December 16, they pulled into the parking lot of Quaid Harley-Davidson in Loma Linda to load thousands of toys, games, books, and goodies into a large truck. They enjoyed a free concert of live music provided by the band Minor Strut, members of which range in age from 10 to 15, and an enthusiastic pre-run rally hosted by Glenn and Gordon Quaid.

During the rally, Len Maddox, a 20-year U.S. Marine Corps veteran who served in World War II and Korea, was honored with a power wheelchair provided by the Wheels for Warriors project of allfromtheheart.org. Judy Harter and K.J. Leibe, volunteers for the organization, commended the 90-something Maddox for serving our country and spoke about the need for private-sector donations to make sure that veterans can enjoy the mobility of a powered chair. Harter said Leibe has personally refurbished all 400 chairs the organization has donated. “Maddox received the 400th one,” she noted. “It’s a passion, a mission, with us.”

The rally ended when Glenn Quaid gave the signal to start the run. The philanthropic bikers mounted their big rides and roared up Anderson Street to the intersection with Prospect Avenue. Although construction of the new adult and children’s hospital towers precluded the riders from pulling up out front like they have done in previous years, a large group of children lined the fourth-floor corridor to wave them on.

A few minutes later, Santa and his assistants unpacked a truckload of presents to the delight of the children.

Tiffany Hoekstra, senior development officer for corporate champions at Loma Linda University Children’s Hospital Foundation, says the Quaid Brothers and all their two- and three-wheeled associates deserve an enormous expression of gratitude for going out of their way to support the emotional needs of hospitalized children.

"We continue to be amazed at the kindness and generosity of Quaid Harley-Davidson and their partners in the motorcycle community," Hoekstra observes. "Once again, they have brought joy to the hearts of thousands of children. It isn’t easy or inexpensive to organize an event like this, and yet the Quaid Brothers have been doing it for 24 years now. They are truly exemplary community leaders and philanthropists. Thank you, Glenn and Gordon and all the members of your family and team, for all you have done for the children of the Inland Empire!"

Scroll down to see the photo gallery of this event.