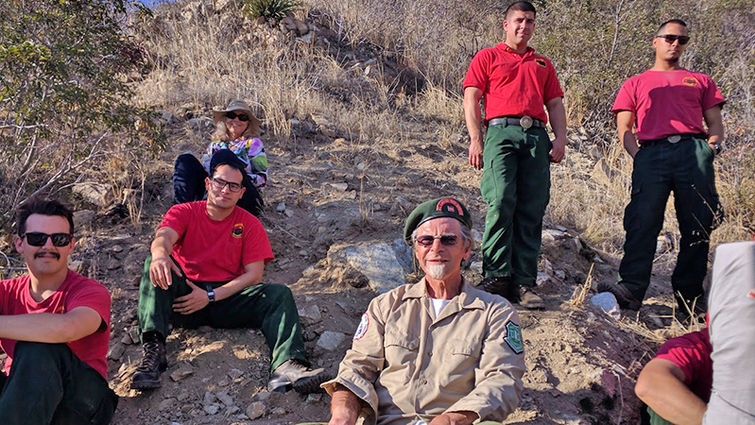 Surrounded by supportive Bear Divide Hotshots and his wife, Sharon, Loop Fire survivor Jerry Smith, center, returned to the site of the fatalities during a 50-year commemorative event Nov. 1 attended by hundreds of firefighters.

A sudden shift in the wind, and the young men never had a chance.

Jerry Smith had just turned 19 when 60 seconds on Nov. 1, 1966, altered his life forever and set him on a course of pain and self-destruction for the next 20 years.

As a newly minted firefighter for the U.S. Forest Service, Smith joined the El Cariso Hotshots in battling the Loop Fire in Angeles National Forest, California, that fall. It was only his third fire.

The danger seemed minimal as the teammates removed brush along steep hillsides to rob the flames of fuel they’d need to spread.

An unforeseen gust of wind changed that. Searing heat from renewed flames roared up the canyon where the firefighters were working — and instantly trapped.

Smith dove facedown into the rocky ground. Though the danger passed in seconds, that was all it took to mortally wound 12 firefighters and scorch 10 others.

Third-degree burns covered 30 percent of Smith’s body, particularly ravaging the talented bass player’s hands. It took more than 25 surgeries for physicians to rebuild them, and even then he lost one finger on his right hand.

I always say the real disability
is between the ears.
Jerry Smith

The grueling physical rehabilitation dragged for two long years, but that was quick compared to the near-impossibility of mental recovery. Battling his trauma, Smith became addicted to drugs and alcohol — and it was two decades before he was able to surmount that.

After years of trying, Smith finally discovered the resolve to become clean in 1986, and he became a nurse.

Today, he works as a rehabilitation nurse at Loma Linda University Medical Center East Campus, serving patients who have suffered spinal injury, stroke or burn. Smith has served in this role for 28 years, and through it, learned to cope with his own demons.

“It’s almost like I’m reaching out and treating myself,” he says. “I’m grateful for the opportunity to be of service.”

For Smith, that means helping patients heal emotionally as well as physically. “I always say the real disability is between their ears,” he says.

November 2016 marked the 50th anniversary of the Loop Fire tragedy. A commemorative event was held in Sylmar to honor those who died and those who still bear the scars. Present were hundreds of firefighters from municipal and wild land fire departments. (See coverage of the event.)

Smith attended, along with his wife, Sharon, and 91-year-old his mother, Beulah Smith, and several supportive friends.

The aftermath of the Loop Fire brought landmark improvements in wilderness firefighting tactics.

“Many things changed as a result of this tragedy, including heightened awareness about the dangers of chimney canyons, improved downhill tactics and the mandated use of fire shelters,” Smith explains. “We survivors have continued to share with the firefighting community our experience, our lessons and insights from that day in 1966.”

As a nurse, Smith carries the wisdom that came out of the tragedy to the realm of medicine, as well. “I often have the chance to share my experience, strength and hope with my patients as a result of living through the Loop Fire.”