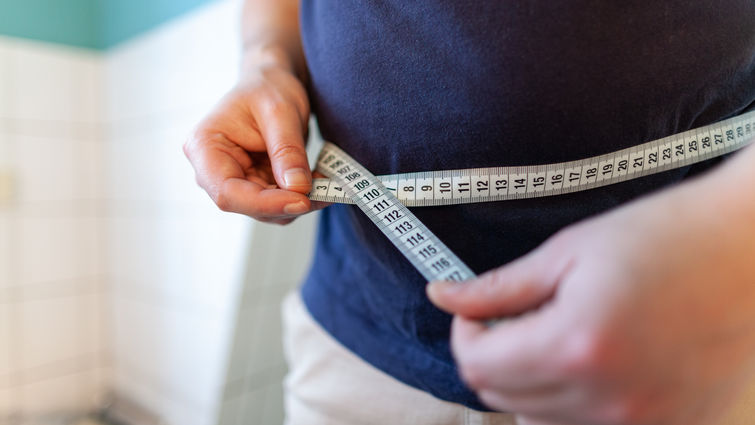 Attaining and maintaining a healthy weight is crucial to men's overall well-being and longevity — especially when preventing prostate cancer, the second leading cause of cancer death in American men. Studies link overall weight and excess abdominal fat to a greater risk of prostate cancer.

“Excess weight parallels the risk of prostate cancer during the aging process,” says Andrew Woodward, MS, RD, CSO, an oncology nutritionist at Loma Linda University Cancer Center. “Many people think that weight gain is inevitable as they age, but that is not the case. Instead, it requires becoming more intentional about physical activity and slowly reducing caloric intake to compensate for aging and sluggish metabolism.”

One way Woodward says excess body fat heightens prostate cancer risk is through its production of cortisol, a stress hormone that increases inflammation in the body. Inflammation is thought to promote the growth of certain cancers, he says.

Insulin problems also help explain the link between belly fat and prostate cancer, Woodward says. Insulin is a growth factor hormone; high levels can promote cancer growth. Excessive belly fat can disrupt the body’s ability to use insulin as it should, a condition called insulin resistance. Woodward and other experts suspect the dysregulation of insulin plays a part in developing prostate cancer, a disease closely tied to hormones.

Get our newsletter for cancer-fighting tips, activities and recipes.

For September’s Prostate Cancer Awareness Month, Woodward outlines three key nutritional ways to prioritize healthy weight and actively decrease the risk of prostate cancer. Any form of voluntary weight loss must pair good nutrition with physical activity, Woodward adds. Myokines, specialized proteins released during exercise, may reduce body fat and boost the immune system, both of which help in the fight against many cancers, including prostate cancer.

Replacing one serving of starches — pasta, potatoes, or rice — with a serving of vegetables — broccoli, cauliflower, or other — is an action that Woodward says can significantly reduce the number of calories consumed.

“If you make that starch to veggie swap for every meal throughout the day, you reduce your caloric intake while still getting the same volume of food,” he says.

One seamless way Woodward suggests making the swap is to explore vegetables prepared to mimic starches, such as cauliflower rice, zoodles (noodles made out of zucchini), or spaghetti squash.

Woodward says that regularly logging types, amounts, and timing of food intake can, over time, lead to discoveries about eating habits, food portions, and patterns.

“Sometimes, people review their food journal and identify instances where they would be able to eat less," he says.

Food journaling may, for instance, reveal a "mood-food connection,” Woodward says, such as stress eating. Craving the calming, soothing effects of carbohydrates in times of emotional turmoil is a common tendency, he says. Through a set of biochemical processes, amino acids from carbohydrates eventually convert into serotonin, a mood stabilizer.

“Food can become a drug of choice,” he says. “When people have a bad day or their feelings are strong, they may eat inappropriately or in excess, which leads to weight gain.”

Growing awareness about food habits is one of the first steps towards identifying room for improvement and working toward healthy weight reduction, Woodward says. Journaling food can be as simple as pencil on paper, he says. Otherwise, online resources like MyFitnessPal are available and provide breakdowns of calories, proteins, and macro-nutrients.

Overall, Woodward recommends men stick to a primarily plant-based diet — whole grains, vegetables, fruits, beans, and other foods that grow from the earth — and avoid processed foods, sugar, and fatty foods. Many fruits and vegetables are rich in phytochemicals, potent compounds that help fight cancer and reduce the risk of its development.

Studies show the diets of westernized nations lead to a six times higher risk of prostate cancer compared to diets of non-westernized countries that are not as heavy on animal products like dairy and meat.

Woodward says each man's journey toward attaining and maintaining a healthy weight is singular and personal.

“It’s not like one size fits all,” he says. “A diet that works for one person may not work for another. Each person needs to look at their complex relationship with food.”

He recommends connecting with a trained nutritionist if you are seeking to better adjust your lifestyle to healthy weight goals. If you struggle to lose weight, he adds, talk to a doctor who specializes in obesity. Consider the Loma Linda University Center for Health Promotion at 909-558-4594.