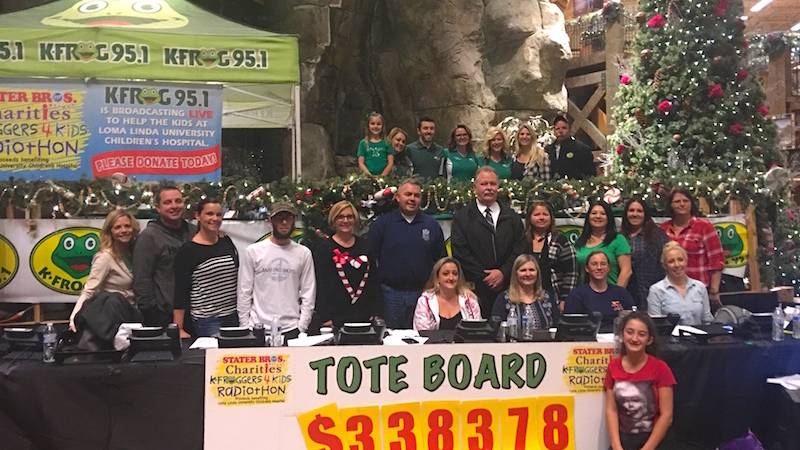 K-FROG 95.1 FM has once worked a miracle for the kids at Loma Linda University Children’s Hospital (LLUCH). The radio station held the 16th annual Stater Bros. Charities K-Froggers for Kids Radiothon on Wednesday, Dec. 7th raising over $340,000 for the hospital.

A check for $338,378 was presented to LLUCH at the conclusion of the radiothon, however additional online donations were made in the hours following the live event increasing the amount raised to over $340,000.

Over the past 15 years, K-FROG has raised over $5 million through the radiothon alone.

Listeners could call in or go online to make donations. All proceeds from the radiothon will go to support the pediatric hematology/oncology unit as well as other programs at LLUCH.

One in 330 Americans develops cancer before the age of twenty. It is the leading cause of death by disease in children under the age of 15 in the United States, and the causes of most childhood cancers are unknown.

As part of their ongoing purpose to help improve and transform the communities their markets serve, Stater Bros. Charities was once again the presenting sponsor for the event this year, donating $200,000 to the event. A check was presented to LLUCH during the radiothon.

PHOTO CAPTION: K-Froggers, volunteers and LLUCH representatives gathered around the final tote board at the conclusion of the 16th annual Stater Bros. Charities K-Froggers for Kids Radiothon on Wednesday, Dec 7th at Bass Pro Shops.