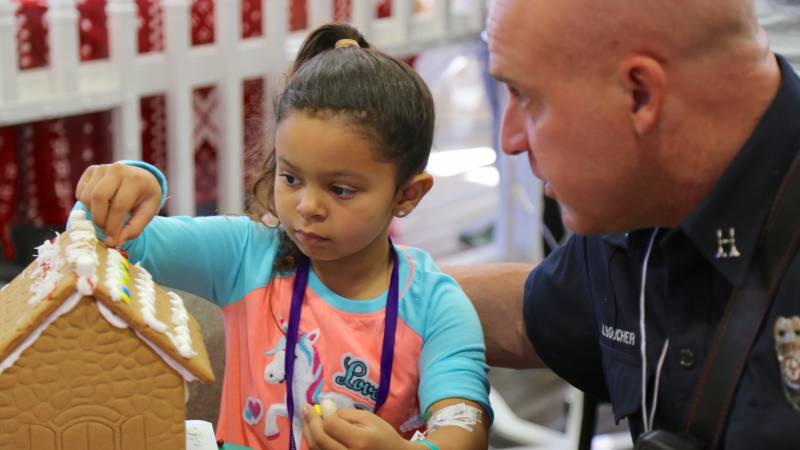 LLUCH patient, Makaylie Guerrero, 5, of Desert Hot Springs, got a helping hand from Nate Boucher of the Loma Linda Fire Department during the gingerbread village event on Monday, Dec. 4.

Patients at Loma Linda University Children’s Hospital (LLUCH) got into the holiday spirit this week by creating a gingerbread village display in the hospital lobby.

Both in- and out-patients were invited to visit the hospital lobby on Monday, Dec. 4 to build and decorate a gingerbread house of their own creation. Patients who were unable to leave the units were given everything they needed to make a house in their rooms.

The annual event is made possible by the Big Hearts for Little Hearts Loma Linda Guild, along with the generosity of two community supporters, Alta Vista Credit Union, which donated $3,200 toward the event; and Costco Wholesale, which donated over 130 gingerbread house kits.

Lynn Sleeth, president of the Loma Linda Guild, enjoyed watching the children assemble the cookie houses and festoon them with white frosting roofs and assorted, colorful candies. Whenever a house was completed, Santa or one of his helpers placed it on a large display structure designed to evoke the shape of a Christmas tree. Patients were also able to take a teddy bear and book of their choice.

Members of the Loma Linda Fire Department also came out for the event to assist patients with building and decorating.

“We are so blessed to have friends who believe in what we are doing for the children of the Inland Empire,” Sleeth said. “We are so grateful for their kindness and generosity.”