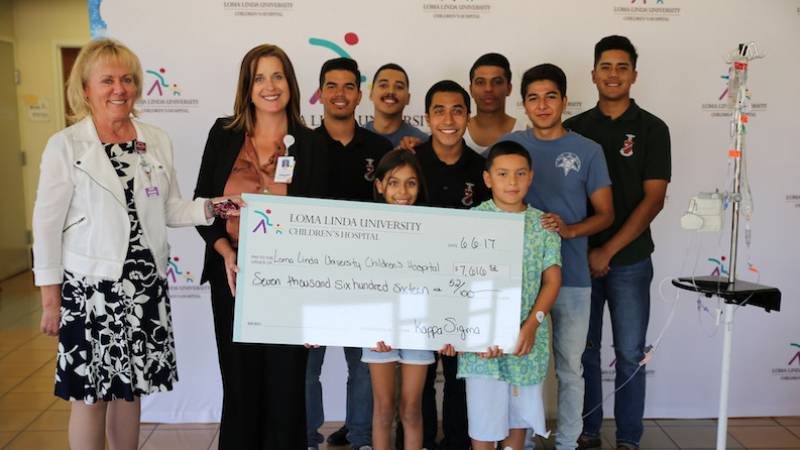 LLUCH patients, Justin Correa, 9, of Bloomington and Tiffany Borrego, 9, of Lake Elsinor accepted the $7,600 check from the Kappa Sigma Fraternity in the LLUCH lobby Tuesday, June 6 on behalf of all patients at the hospital.

Kappa Sigma Fraternity, located on the Cal State San Bernardino Campus, recently donanted over $7,600 and toys to Loma Linda University Children’s Hospital (LLUCH) through “penny wars,” a competition amongst the sororities on campus to support Vision 2020 – The Campaign for a Whole Tomorrow.

Six members from the fraternity stopped by LLUCH Tuesday, June 6 and presented a check and a variety of toys to Children’s Hospital staff and patients, Justin Correa, 9, of Bloomington and Tiffany Borrego, 9, of Lake Elsinore.

“Our campus became involved in competing to see who could raise the most coins, and it was powerful to see everyone’s involvement,” said Danny Razo, philanthropy chair of Kappa Sigma. “Many of us have had personal experiences and family members who have been treated here.”

Giovanni Barreto and the fraternity’s executive committee shared their personal connections with the children’s hospital through siblings who were born and treated at LLUCH. They wanted staff and patients to know that their fraternity plans to make this an ongoing project. “We have no plans on stopping now, we’re just getting started,” Barreto said.

Helen Staples-Evans, chief nursing officer of LLUCH, emphasized the difference the fraternity is making in building the new hospital tower as part of Vision 2020.

“You have raised money for children whose faces you’ve never seen, and they’ll go to kids who you will never meet,” Staples-Evans said to the fraternity, “but you make a difference, and for that we are very grateful.”

Joanna DeLeon, director of the LLUCH foundation said she felt inspired by the fraternity. “This is an amazing testament to how a community can work together to improve the lives of our smallest patients.”