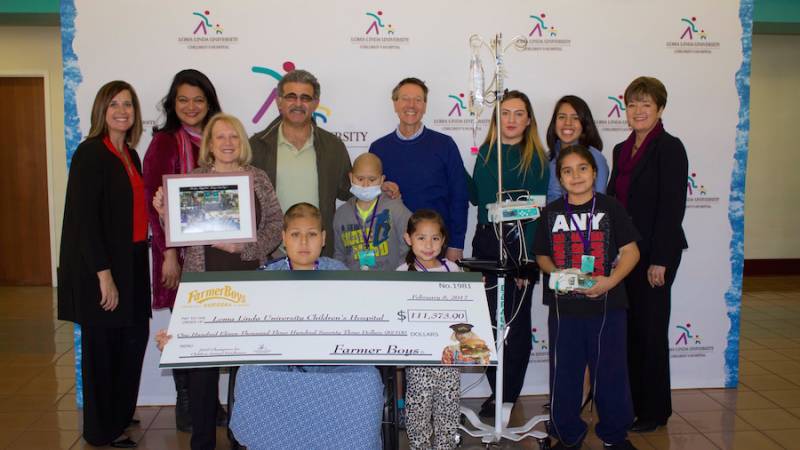 LLUCH Patients and staff were all smiles as they accepted a check from Farmer Boys Wednesday, Feb. 8 in the hospital lobby.

Restaurant Founder and CEO, Demetris Havadjias, along with the president and COO, Karen Eadon presented a check for $111,374 to the hospital Wednesday, Feb. 8. Funds were raised during the 16th annual “Give a Helping Hand” fundraiser, which was held Sept. 6 – Oct. 14, 2016. During that time Farmer Boys guests were invited to make a donation by purchasing a paper “Be a Champion for Children” icon for $1 or more.

“This has been the most successful fundraiser to date,” said Eadon, who also highlighted that the Loma Linda location raised the most of all the Farmer Boys restaurants.

Over the past 16 years Farmer Boys has donated more than $655,000 to LLUCH.
“Farmer Boys has been a true champion for our kids and the community,” said Sherry Nolfe, executive director of patient care, LLUCH. “These gifts have made a direct impact on giving us the tools and resources we need to save lives, and they are helping us build a future for our new hospital.”

LLUCH patients were able to attend the check presentation in the hospital lobby and accepted the check on behalf of all the kids receiving care.
The majority of the funds donated will go toward Vision 2020, The Campaign for a Whole Tomorrow, and the construction of the new hospital tower, and a portion will go toward the sponsorship of the annual Children’s Day held every spring.

The generosity of Farmer Boys has not gone unnoticed over the years. They will be recognized with the Shirley N. Pettis Award at the annual Foundation Gala next Thursday, Feb. 16 at the Riverside Convention Center.
Havadjias noted that he and the Farmer Boys team are proud to have LLUCH in the community because LLUCH is “contributing to humanity.” He added that while this fundraiser was successful, he is hoping to bring a bigger check next year.