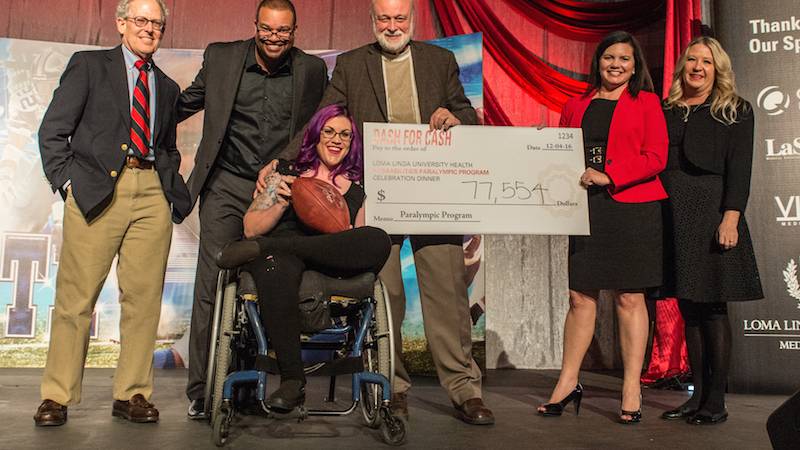 A new spin on the event this year welcomed guest speaker Emmitt Smith, former NFL running back for the Dallas Cowboys, who left the audience with an awe-inspiring quote:

“The price of victory is high, but so is the reward.”

As a free, non-profit, community outreach program, PossAbilities’ goal is to provide those with permanent physical disabilities support and resources to stay active and healthy in life – a task that could otherwise be daunting.

“I think many – if not all – of our members can relate to that statement,” said program manager Cotie Williams.

Dealing with an injury can be physically and mentally challenging, “but once you are able to overcome your obstacles, the road ahead is encouraging,” Williams added.

During the fundraising event for PossAblilities, guests had the opportunity to participate in the dash for cash, pledging to contribute any dollar amount of their choosing. Funds from this portion will support the sponsorship of Jenna Rollman into the Paralympic sports program.

To encourage guests, it was announced that the individual who donated the most during the dash would receive a football autographed by Emmitt Smith.

Smith raised the bar by announcing on stage that would donate one of his personal NFL touchdown game balls to the highest bidder, starting the bid off at $10,000.

Guest and sponsor, Antonio Rodriguez, was the winner of both footballs.

During the celebration dinner Eric Arrington was bestowed posthumously with the first ever PossAbilities Lifetime Achievement Award. He was a dedicated mentor, prayer warrior, counselor and friend who gave so much of his life to PossAbilities. His wife, Shirley, accepted the award.

Sheila Marchbanks was recognized as Member of the Year for her work with PossAbilities and the sickle cell support group.

Additionally, Zimris Solis was inducted into the Hall of Heroes, individuals recognized for their ability to thrive through disability, give back to their community and lead by example.

The true celebration came at the conclusion of the event when it was announced that over $77,000 had been raised for PossAbilities. However, additional funds coming in after the event increased that total to $88,000.

“We have always considered our mission to be an extension of the healing ministry of Jesus Christ,” said Pedro Payne, PhD, director, community outreach at Loma Linda University Health. “That is why the services we provide our members are always free of cost. Everyone with a permanent disability is welcome to join – we never turn anyone away. Your generous support makes it possible for us to help our members live active and productive lives!”