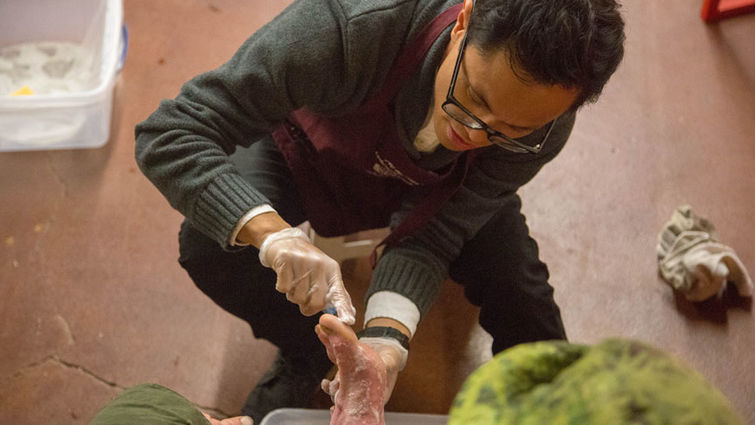 As a Loma Linda University student, Tevita Palaki once skipped meals to financially support his budding ministry that now coordinates numerous volunteers to serve the homeless population in San Bernardino County by offering them the Christian act of footwashing.

Today, the non-profit organization, United Feet, which Palaki launched as a sophomore in 2015, sends out volunteers up to four times a week to serve local homeless. Volunteers are armed with buckets, soap and towels to serve homeless men and women at area churches and outreach events with a sacrament from New Testament accounts of Jesus washing the feet of his disciples. Volunteers set up chairs and supplies, wash the feet of homeless people interested in being served, provide them a pair of socks and offer to pray with them.

"You can look into their lives, where they've walked and help wash them clean,” says Palaki, who graduated from Loma Linda University School of Allied Health Professions in 2017 with a Master’s of Science in orthotics and prosthetics. “Showing how Jesus lived is sometimes more impactful than saying it.”

Students from a variety of academic programs at Loma Linda University now volunteer for the ministry, building relationships with the less fortunate in the community, listening to their stories and praying with them.

Participants are hoping to grow the ministry, which serves a small portion of the homeless populations of nearly 60,000 people in Los Angeles and San Bernardino counties, according to county records.

Today, Palaki works as an orthotic and prosthetic resident in Ontario and continues to volunteer for the United Feet ministry in the evenings.

One recent evening, he and Al Ursales, an orthotics and prosthetics student who took over the ministry in 2017, set up in a back room at church in Redlands that was hosting a community outreach program. The duo set up chairs, water basins, and had towels and socks ready nearby. Then they waited.

“Sometimes it takes people a bit to come over,” Ursales said. “Sometimes it’s curiosity more than the need, I think.”

Several people trickled through over the next hour, including some repeats. As they sat, the footwashers would ask how they were. One woman answered with “cold and tired,” but then released a sigh of relief as she put her feet into the basin of warm water.

There was a familiarity between the students and the people they were serving. “We feel strongly that we, as the students, are called to be the church,” said Palaki. “Our goal is extending the reach of Christ past walls and pews, and the homeless community have become our congregation.”

"It also helps get rid of the judgmental tendencies and biases that I think we all have," said Audrey Bamford, a nutrition and dietetics student at the SAHP who regularly volunteers. "It shows you the person behind the face, and it becomes easier to see the people for who God made them. It's undoubtedly been a humbling experience."

“No worries,” said Ursales, who washed the man’s feet with soapy water while wearing rubber gloves.

Palaki's successor — Ursales — smiled as he recalled the ministry's beginning three years ago. "Tevita has two especially impressive talents: getting people passionate about his passions and being able to find funding when things seem impossible," Ursales said. "One time, Tevita got the LLU School of Pharmacy so excited that they donated 1,000 new pairs of socks. It's just remarkable to see how God has been able to use United Feet ministries."

The concept for United Feet formed when an LLU orthopedics and prosthetics professor invited his class over to dinner at his home. At the end of the evening, only the professor, another student, and Palaki were left talking about their passions. Palaki's passion for the homeless community stood out.

"I thought to myself, 'What are their real needs? What basic needs are created by the struggles they go through each day?'" Palaki recalls. He turned to scripture, and an answer came: their feet. Many of the homeless spend most of the day on their feet, and because of that, their feet are often dirty and sore.

"During that moment," Palaki said, "we knew that true Christianity was washing the feet of someone who needs it. You have to empty yourself completely, so God can fill you with the Holy Spirit,” he says. “That knowledge is still the foundation of the ministry."

But the next few months were slowed by obstacles and red tape. Unexpected challenges and paperwork materialized, but instead of being discouraged, Palaki took matters into his own hands. He took out $500 in student loans.

“I know, that sounds absurd, but I knew I couldn't wait for someone else to do this thing that I was called to do," he recalls.

The loan covered costs for a short time, but as it ran out, they still had not secured finances for the supplies they needed, such as buckets, soap and the socks. More volunteers joined, and their reach spread further, but this just exhausted their finances more rapidly.

Then the money ran out — and along with it, the other volunteers. This would have meant the end of the program, but Palaki couldn't extinguish the spark that drove him to show a tangible expression of Jesus by following His ministry.

"I didn't know what else I could do, so I began fasting for lunch on Thursdays so I could use that meal's money to help the community I loved," Palaki says.

He says he remembers one day he cried because he could only afford to buy enough materials for one volunteer to serve, and he knew he needed to keep fighting to keep the ministry going.

Palaki spent two months serving forgotten communities, from Los Angeles all the way north to Napa Valley. "I was so tired, and I wanted to stop because I felt so alone. But God kept giving me just enough energy to keep it up. I had no idea at that time what God had planned."

After this challenging time in the ministry, the students who had stopped volunteering due to insufficient funding realized they couldn’t wait for a check to come in and revive United Feet. They decided, much like Palaki, that they didn’t want to wait for someone else to provide the needed finances.

Many past volunteers decided to keep it going with their own money, not willing to dissolve the connection they felt to this community. To date, more than $3,000 worth of equipment has been donated by students in five of Loma Linda University’s eight schools.

They've given not only of their money but of their time. Over that following year, roughly 1,200 hours spent serving, over 350 of which were done by Palaki himself.

"I knew when people started showing up with equipment to use and socks to give, God had worked on the other volunteer's heart's just like He had mine," Palaki says.

"This has taught us that when God gives you a passion, He will give you a way." 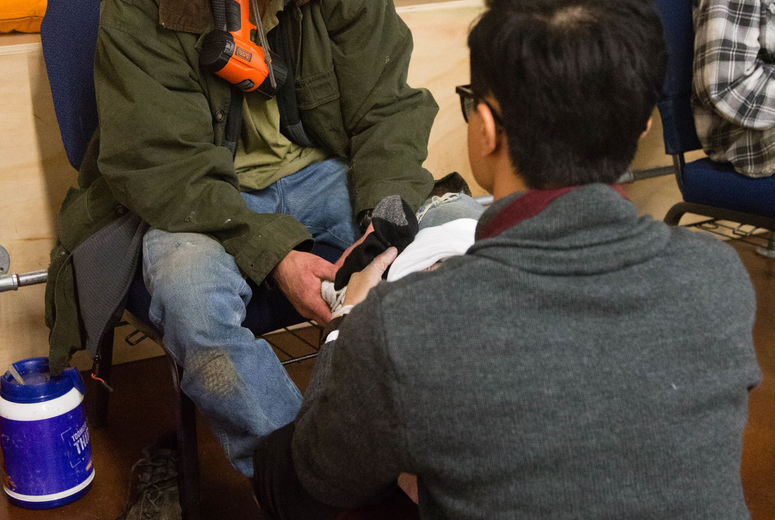 Al Ursales offers socks to a homeless man at the Crosswalk Clinic in Redlands in January. 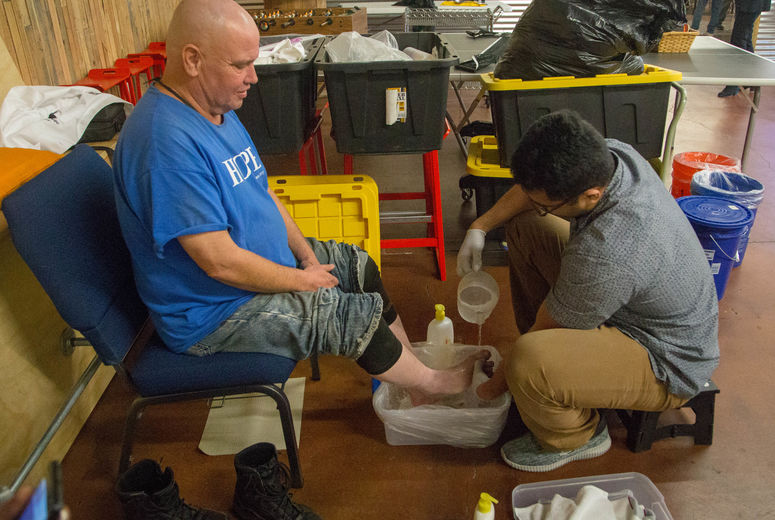 Tevita Palaki washes the feet of a homeless man at the Crosswalk Clinic in Redlands in January. 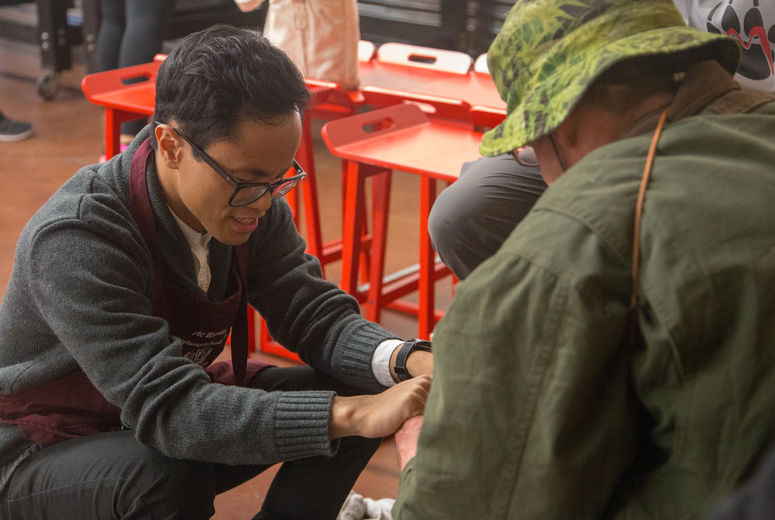 Al Ursales prays with a homeless man after washing his feet at the Crosswalk Clinic in Redlands in January. 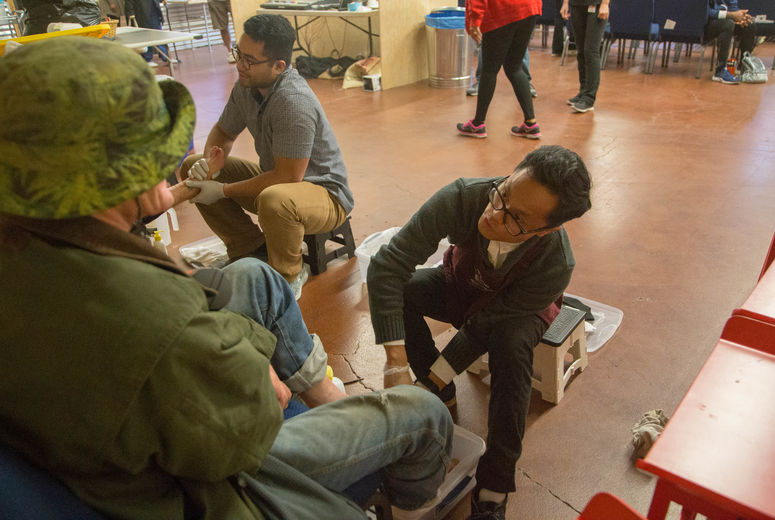 Tevita Palaki (left) and Al Ursales wash the feet of two members of the homeless community at the Crosswalk Clinic in Redlands in January.