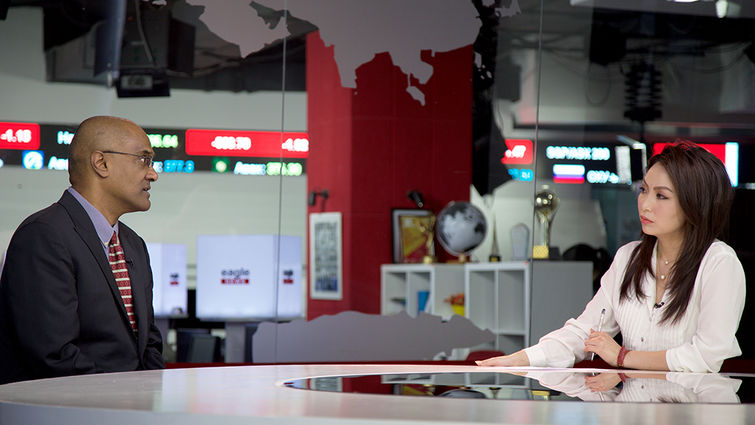 Loma Linda University School of Public Health is intensifying its collaboration with Mongolian public health officials to halt the sale of tobacco to children and help smokers who want to quit.

Plans include construction of a geographic information systems (GIS) lab to help track vendors selling tobacco to minors as well as a clinical trial of an herbal supplement formulated to offer an affordable way to help smokers kick the habit.

School officials announced the building of the GIS lab during a visit to Mongolian National University of Medical Sciences (MNUMS) last month. The lab, scheduled to open in a couple of years, will enable researchers to better track non-compliance in the sales of tobacco. It will be funded by a $1.4 million grant from the U.S. National Institutes of Health.

Loma Linda University representatives also announced that a $185,000 grant from the Pfizer Foundation will fund a clinical trial of an affordable herbal supplement to help smokers quit smoking. While some tobacco-cessation products cost $400 per person, many Mongolians can’t even afford $176 for the popular nicotine patch. At $19 per person, the supplement will offer a cost-effective alternative if it performs as well as the patch.

Boloorma Purevdorj, MD, MPH, an addiction physician and lecturer at the MNUMS School of Public Health, says the Mongolian government will be watching closely.

“If this herbal supplement proves as effective as the nicotine patch, it will be adopted as part of Mongolia’s national health plan,” she said.

Officials from both schools joined in presenting at the World No Tobacco Day Conference, held at MNUMS on May 31. The one-day conference brought together dozens of representatives from the federal government, public health agencies, police, health organizations and non-governmental aid organizations.

While in Mongolia, Marshak joined Davaalkham Dambadarjaa, MD, PhD, dean of MNUMS, in signing a memorandum of understanding to formalize their two schools’ intentions to share resources, training and expertise.

Dambadarjaa mentioned the GIS lab in expressing her thanks to Loma Linda University.

“This will be the first comprehensive GIS lab in all of Mongolia,” she said. “There are urgent needs to enhance capacity and human resources here. The training of our tobacco-research faculty and the building of the GIS lab will be very crucial and helpful in this regard.”

Daravuth Yel, MD, a World Health Organization representative who has collaborated with Loma Linda University since 2002, was similarly appreciative.

“Loma Linda University School of Public Health has provided training on tobacco-control leadership for the Cambodian government and its partners for many years,” Yel said. “The assistance has been invaluable.”

Although forbidden by Mongolian law, findings presented by Loma Linda University at the World Congress of Tobacco or Health indicate that cigarette sales to children and selling tobacco in close proximity to schools are not uncommon.

“It’s illegal to sell cigarettes to kids, but many vendors here do it all the time,” said Pramil Singh, DrPH, director of the Center for Health Research at Loma Linda University School of Public Health. Singh, who delivered four presentations at the conference, has worked to secure numerous grants for tobacco-control efforts over the years.

The day before the World No Tobacco Day conference was held on May 31, Marshak, the Loma Linda School of Public Health Dean, accompanied Purevdorj, the addiction physician, on a mission to see if tobacco is still being sold to children in Mongolia.

At a busy intersection near an elementary school, the pair found a sidewalk vendor offering ice cream, soft drinks and bottled water to pedestrians. After insisting he doesn’t sell tobacco, the owner produced three packs and several loose cigarettes from under the counter when Purevdorj assured him she and Marshak were not police officers.

Minutes later, the women observed two uniformed elementary students purchasing single, unwrapped cigarettes from a vendor across the street from the same school.

When they reported their findings to Singh, the 50-year-old father retained a stoic look on his face that was betrayed by a look of fury in his eye.

“This is personal. This is why we’re fighting,” he said. 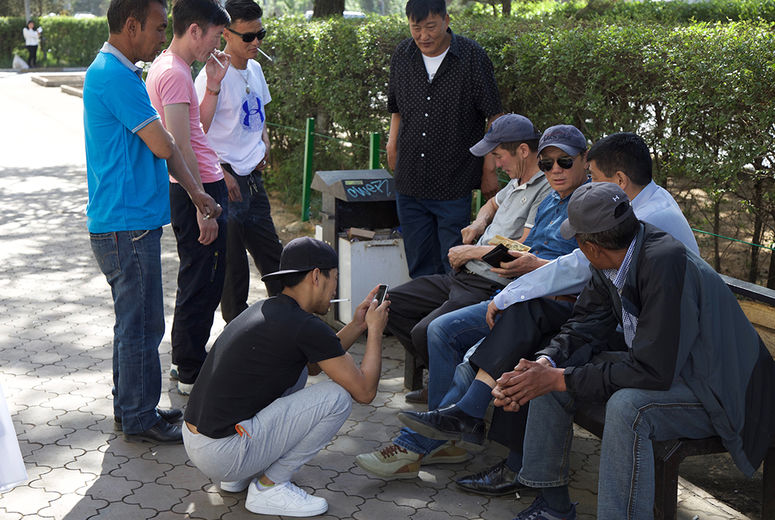 Smoking is a major public health problem in Mongolia. (Photos by James Ponder). 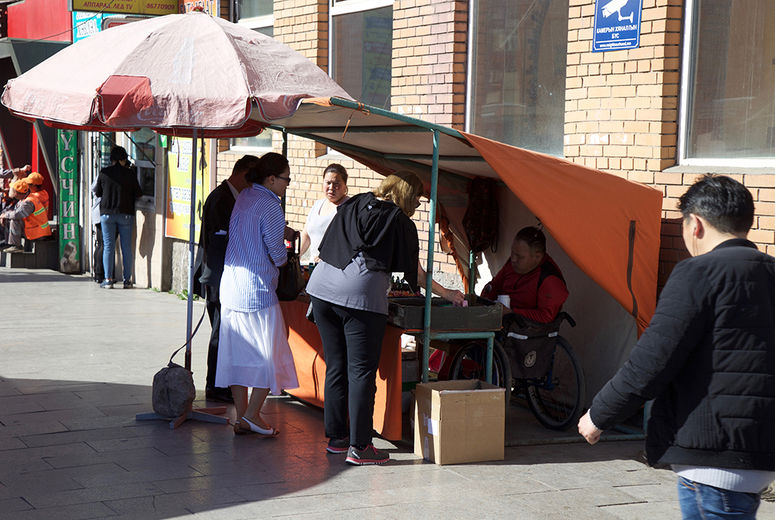 Despite his location in a no-tobacco zone, this street vendor sold cigarettes to representatives of LLU and Mongolian National University of Medical Sciences (MNUMS). 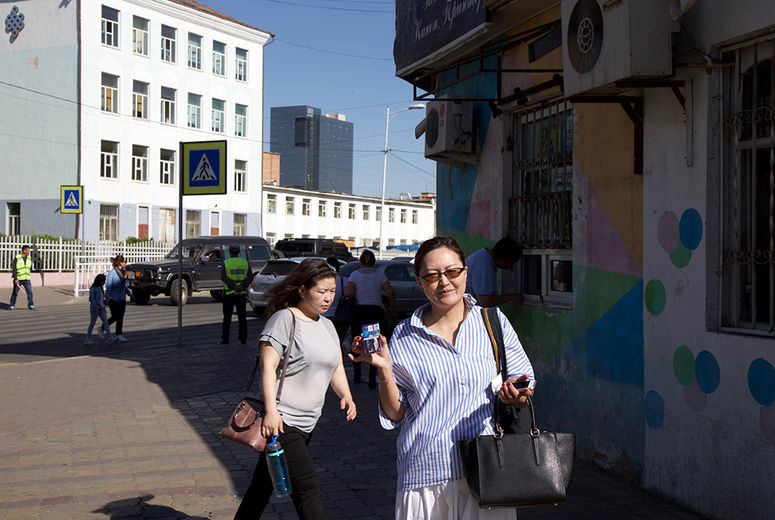 Boloorma Purevdorj, MD, MPH, holds cigarettes she purchased from the vendor behind her despite the vendor's location in a no-tobacco zone. 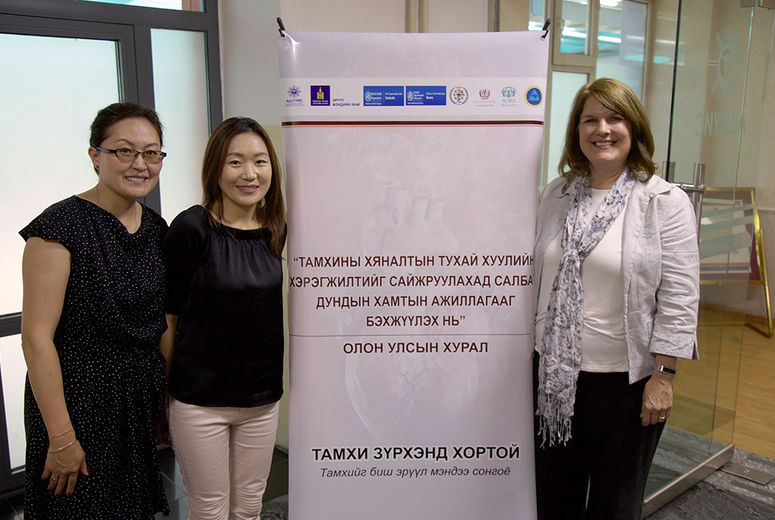 (From left): Boloorma Purevdorj, MD, MPH, Khandmaa Sukhbaatar, PhD, MPH, and Helen Hopp Marshak, PhD, with a poster for the World No Tobacco Day conference. The appearance of contemporary Mongolian words contrasts with . . . 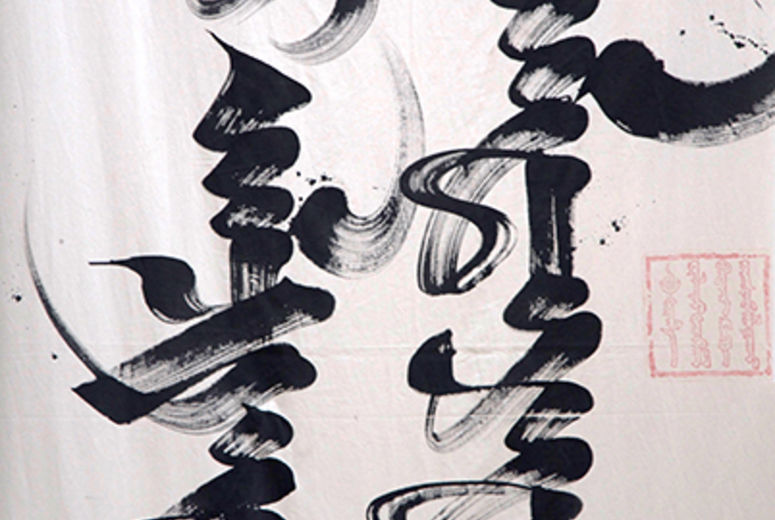 . . . the elegant beauty of an ancient Mongolian script describing the exploits of Chinggis Khaan. 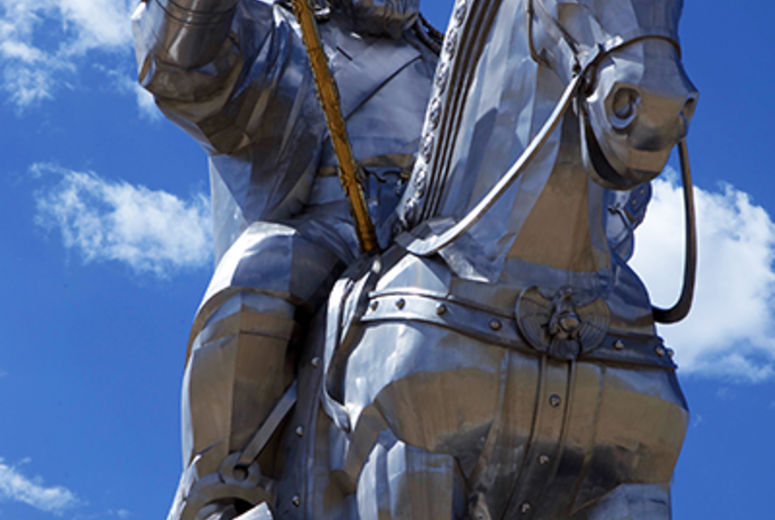 A 131-foot statue of Chinggis Khaan looms over the Mongolian steppe country south of Ulaanbaatar. 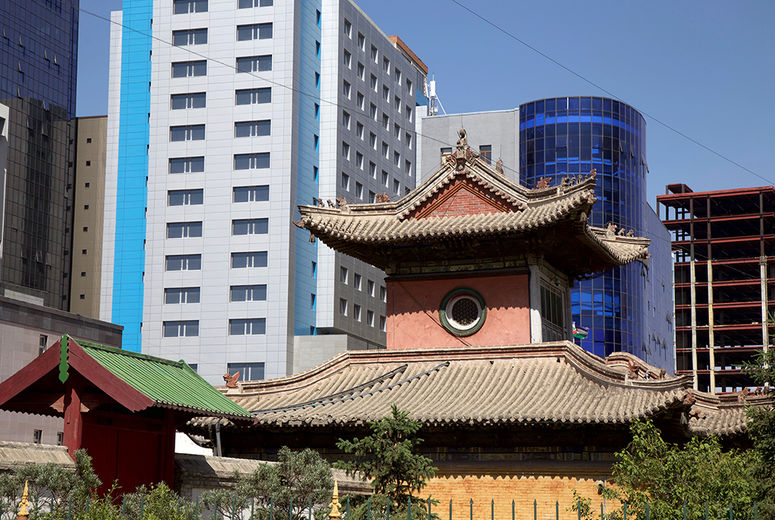 Contemporary Ulaanbaatar blends the old and the new in a seamless succession of architectural styles. 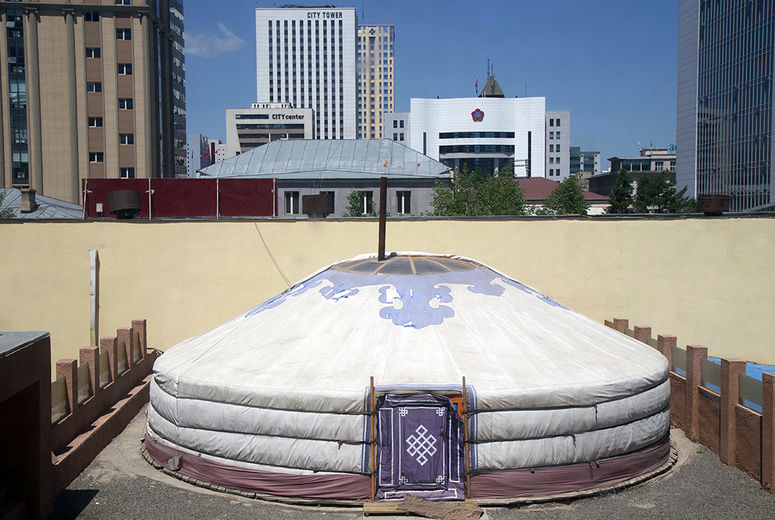 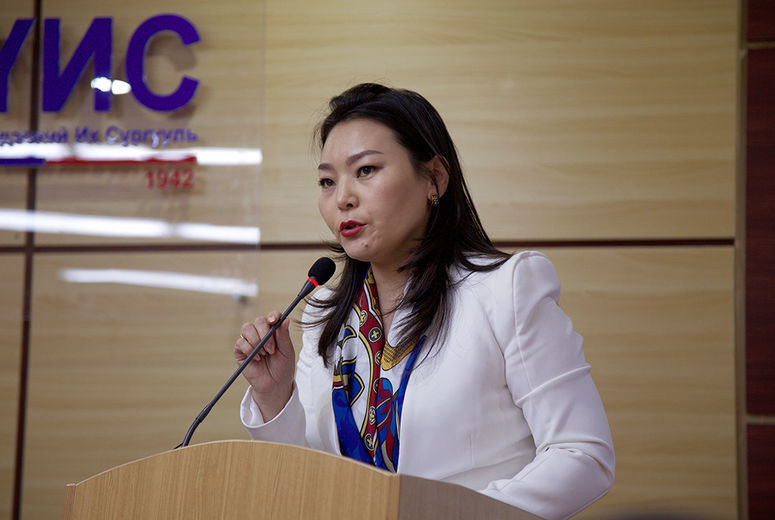 Davaalkham Dambadarjaa, MD, PhD, dean of the School of Public Health at MNUMS, welcomes guests to the World No Tobacco Day conference. 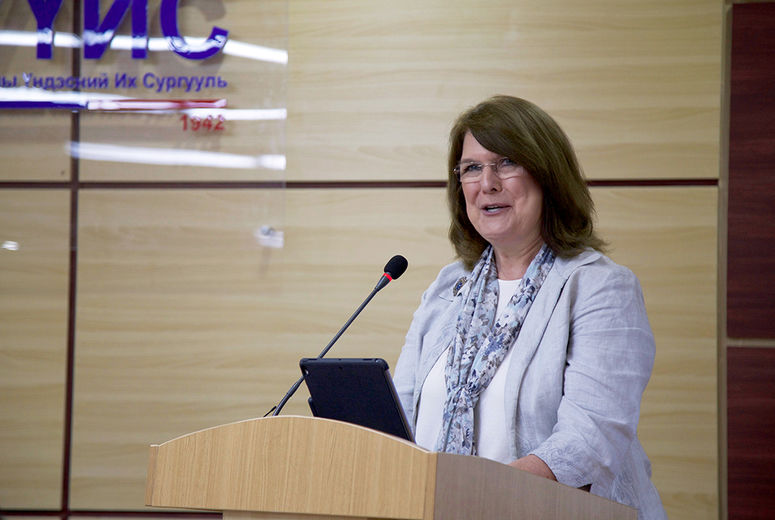 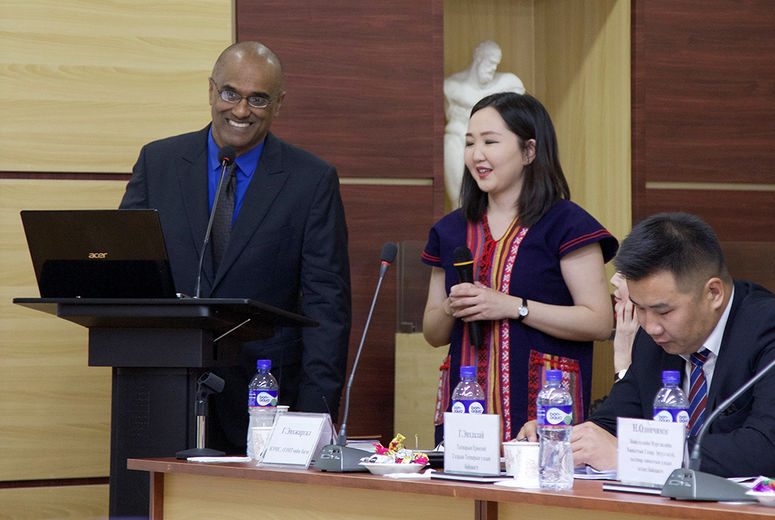 Pramil Singh, DrPH, interacts with the audience during one of his four presentations at the conference. 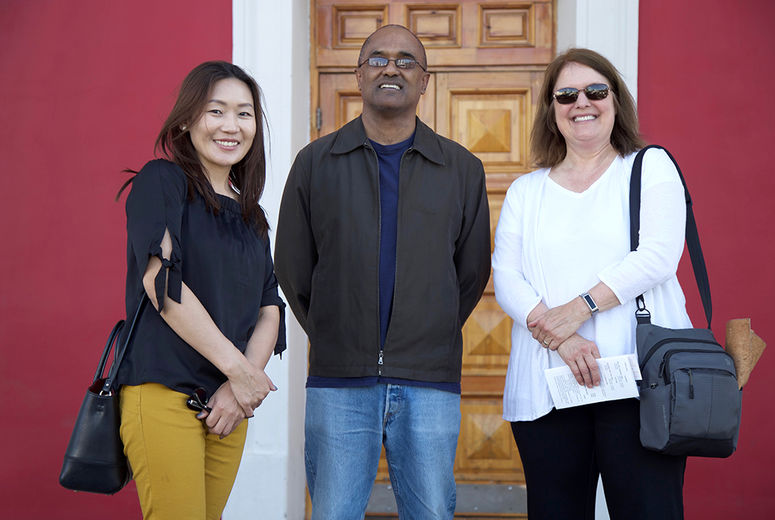