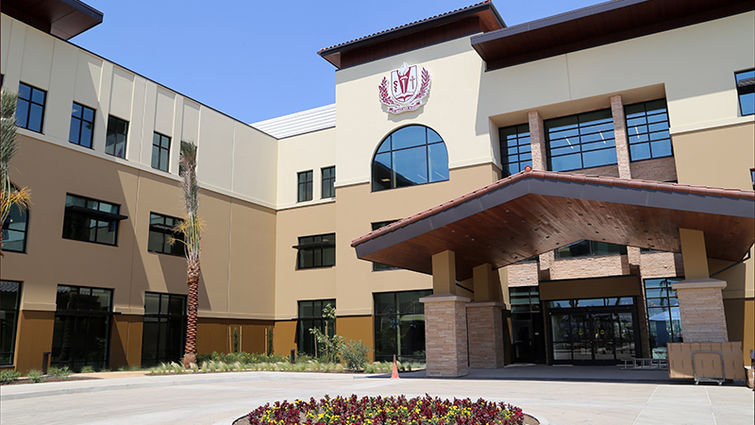 The tone was joyous during the June 22 ribbon cutting ceremony for Loma Linda University Health – San Bernardino. An awareness and understanding of the area’s great need (it is the poorest city of its size in California) and commitment to the Loma Linda mission to continue the teaching and healing ministry of Jesus Christ inspired the project.

Not only will the campus serve as a clinical and educational facility, it has the potential to become the largest outpatient facility of its kind in the U.S., providing health care for 200,000 people each year.

As he spoke during the formal program, Richard H. Hart, MD, DrPH, president of Loma Linda University Health, recognized old and new friends: colleagues, educators, elected officials, donors and potential students. Together they represented relationships—some dating back more than 100 years—drawn upon to make the campus possible.

Before the Board of Trustees approved the project in May 2014, Hart met with colleagues at Loma Linda University Health and Social Action Community Health System (SACHS) as well as city officials and representatives of other organizations in small groups; planning sessions were carved into demanding schedules while others took place into the evening.

Hart’s message and words were formed with joy and with such deep gratitude that he paused. In that moment the audience spontaneously responded, showing their support with tremendous applause.

While SACHS is the largest provider of health services in San Bernardino County, seeing about 50,000 patients a year, the new campus will more than triple its space, providing enhanced care for tens of thousands of patients who, because of their insurance status, would not otherwise be able to access it.

San Manuel Gateway College, the first of its kind in the United States, will integrate training programs in health careers with clinical experience, allowing students to benefit from hands-on training and mentoring by Loma Linda University Health faculty and students. The college is named after the San Manuel Band of Mission Indians, whose generous donation of $10 million toward Vision 2020: the Campaign for a Whole Tomorrow enabled its construction. The tribe is composed of the indigenous peoples of the San Bernardino Valley and the surrounding mountains, passes and canyons and part of the greater Serrano Nation whose aboriginal lands encompassed the majority of San Bernardino County.

A highlight of the ceremony was the singing of a selection of bird songs by five members of the San Manuel Band of Mission Indians and one from the Cahuilla tribe. In his introduction to the performance, Hart observed that, “The best relationships are the long relationships. This one goes back literally 110 years when we first started here in 1905 with the Serrano Indians.”

Tribal Member Tom Ramos expressed optimism that the new campus will be effective in “revitalizing San Bernardino and our whole community.” See elsewhere on this website for a feature article on the cultural and historical significance of bird songs to the people of San Manuel.

In an interview recorded at the time of the groundbreaking for the new campus, Ramos recalled the days when physicians and nurses from Loma Linda made special trips to ensure that members of the tribe had access to quality health care.

“They came for us,” Ramos reported, “and now that we’ve been blessed with a great fortune, San Manuel is still very much a part of this community, and we really, wholeheartedly, love to give back.”

In calling Nancy Young, MHES, president and CEO of SAC Health System (SACHS), and Arwyn Wild, MA, executive director of San Manuel Gateway College, to the podium, Hart acknowledged that Young has been the administrator of SACHS for 17 years. Before joining Loma Linda University Health, Wild worked as a principal in the San Bernardino City Unified School District for 20 years.

As he began his address to the crowd, Wild said, “It is a privilege to be associated with such a great man,” pointing to Hart. Once the applause subsided, Wild noted that in the beginning, there was a group called the San Manuel Gateway College Task Force that was charged with dreaming and planning for what the new campus could be. “I’m proud to say that that group was made up of many different entities and organizations,” Wild observed.

After noting that it is a privilege to see all the knowledge, energy, and resources represented on the task force brought to bear on the creation of the new campus, Wild choked up when he said, “I would be remiss in making this about us. It’s not about us. It’s about the future. It’s about our kids. It’s about providing the light at the end of the tunnel. This opportunity is what San Manuel Gateway College is all about.”

At the end of his remarks, Wild asked a group of students from San Bernardino City Unified School District to stand. “This is for you,” he concluded.

“It’s an amazingly emotional day,” Young said at the beginning of her comments. “This building that we stand before is all of our dreams, for so many years, coming true, and it’s a remarkable, remarkable thing to be a part of this team!"

After thanking the medical residents from Loma Linda University Medical Center and Loma Linda University Children’s Hospital who have become an integral part of the SACHS family, Young praised Tonya Twyman, MSc., a project officer for HRSA, the Health Resources and Services Administration of the U.S. Department of Health and Human Services.

“In 2013,” Young explained, “we wrote to HRSA and asked for a teaching health center award so we could expand our ability to teach those residents. We were awarded that very year, and it’s been an amazing journey to share this with so many of our residents, whom we love so much.” Young then asked Twyman to stand and said, “She’s amazing, and has supported us so much! On July 1, SACHS will be the largest teaching health center across the nation. So God bless you, Tanya. Thank you so much!”

When it was his turn to speak, San Manuel Band of Mission Indians Tribal Secretary Ken Ramirez acknowledged the emotion of the morning and said, “It’s a new day in San Bernardino!”

Reminiscing about meeting with Hart to discuss what the new campus would accomplish, Ramirez commented, “To see it come to fruition today: what an honor! Today, we’re thinking about Loma Linda, San Bernardino, the county, as our larger family. Through these partnerships we are turning the corner on a new beginning in San Bernardino.

“It’s a very great thing to be a part of something from the beginning to the end,” Ramirez concluded. “And so from my tribal family to the larger family—OUR family—I say ‘Congratulations on a nice new building that’s going to provide services to a large community that went without for such a long time.”

After the ribbon cutting, the crowd dispersed in two different directions. Most people enjoyed the opportunity to mingle and enjoy refreshments inside the community resource center.

Fine art photographer Michael Hardison paid visual tribute to his hometown in a series of photographs in the community resource center titled, “This Beautiful City.”

“A once-thriving city,” Hardison wrote, “San Bernardino is often depicted as a place of crime, corruption, and bankruptcy. In the days following the terror attack (Dec. 2, 2015), the negative interpretations continued, overlooking the good that still resided in the area—the people, the community, and the history of the region.”

Hardison concludes, “The inspiration behind 'This Beautiful City' stems from the resilience of the community; people coming together, reaching out, and moving forward, living in the Inland Empire.”

How fitting that these photographs, which convey such a positive message, are displayed on the very campus where this transformation will occur.

— By James Ponder and Nancy Yuen