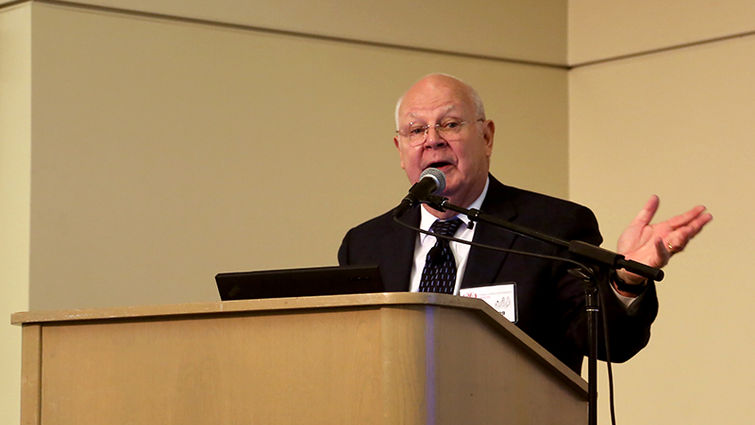 At a time when many decry the prospects of Southern California’s economically depressed Inland Empire, one expert is saying that two bold initiatives on the part of Loma Linda University Health will play pivotal roles in the area’s turnaround. John Husing, PhD, chief economist for the Inland Empire, made the remarks at the 2016 Research Affairs Symposium, which was held last month on the university campus.

Although the region has been reeling since the Great Recession of 2007 and the City of San Bernardino’s 2012 bankruptcy declaration, Husing anticipates that the new ventures will make a big difference locally within the next few years.

He cited the new emphasis on technology transfer—the business of turning laboratory discoveries into commercial products and services—and the new Loma Linda University Health-San Bernardino project as vital to the rebuilding and recovery of the region’s battered economy.

The push for a renewed focus on technology transfer is expected to swing into high gear when a new center opens on the Loma Linda University campus in early December. Called n3EIGHT, LLC, and pronounced “incubate,” the new center will bring academic and clinical researchers together with business and corporate leaders to launch new products based on their discoveries.

Loma Linda University Health-San Bernardino, the other initiative Husing cited, will serve as a clinical and educational facility in the heart of the San Bernardino inner city. In addition to providing certificate-level training programs at San Manuel Gateway College—which was made possible through a generous gift from the San Manuel Band of Mission Indians as part of the Vision 2020 campaign—the new campus will provide health care for 200,000 people each year.

In noting that Loma Linda University Health pumps more than $1,336 billion into the Inland Empire economy each year, Husing predicted the organization’s financial impact will grow far beyond that in coming years as recent graduates of the college find high-paying health care careers and begin spending their money in local communities. He also said that the new n3EIGHT center will likewise benefit the region by spawning some new companies and attracting others to the area to capitalize on research findings at the university. That in turn will create better-paying jobs that will similarly draw more highly-educated employees to the area.

“What all of you do is so absolutely important to the Inland Empire and its economy,” Husing told his Loma Linda audience, “because the one thing that we do not have enough of in this particular region is high-end jobs created by fundamental research that turns into companies that turn into jobs . . . ”

Near the end of his 40-minute speech, Husing said Loma Linda University Health supports the Inland Empire in another important way. After referencing the fears many residents have of disruptions like international terrorism and pandemic diseases, Husing commented on the mass shooting in San Bernardino that occurred in December 2015.

“This institution plays an enormous role, I believe, on the psychology of this particular region,” he observed. He then asked where the people who were badly injured in the shooting end up being treated. “The answer is, at Loma Linda University Medical Center.”

After his remarks, Husing entertained questions from the audience.

“Ten years from now,” one attendee asked, “what will be the impact of Loma Linda University Health—San Bernardino on the Inland Empire?”

“It depends upon how well the other institutions of the area work together with Loma Linda,” Husing responded. “This is exactly the kind of place we need given the program we’re trying to develop to bring people out of poverty into the middle class. To the extent that it becomes a place to help solve the problem of upward mobility, it becomes absolutely at the center of what we need. Could it be hugely important? Absolutely! I suspect it’s more on the rest of us than on Loma Linda.”