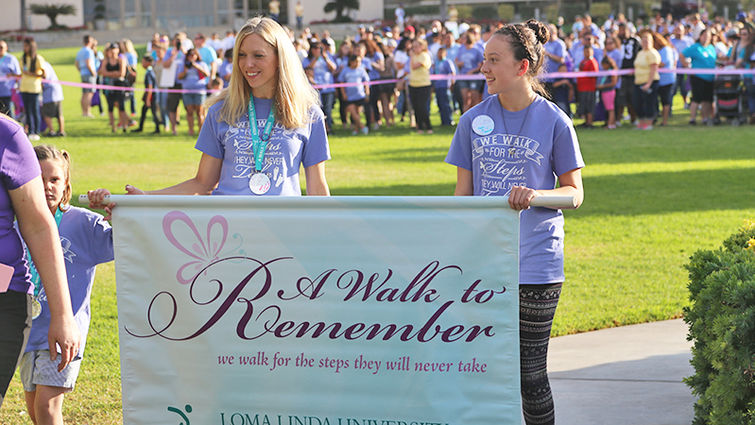 Members of the West family prepare to lead the memorial walk.

On the day of Oct. 9, “A Walk to Remember” at Loma Linda University Health brought together hundreds of mourning families to recall and honor the brief lives of babies lost in miscarriage, stillbirth or infant death. The annual event includes a memorial service and brief walk in honor of the steps these children never got to take.

She and her husband, Brian, lost their baby daughter named Angel in 1998 and have since become active helping other families facing similar losses. In fact, Julie Cieslak and Leandra McHargue, RN, bereavement coordinator for the neonatal ICU, were the individuals who first dreamed of bringing A Walk to Remember to Loma Linda University Children’s Hospital.

Brian Cieslak followed his wife in making remarks, speaking about the right of fathers to grieve the same way society allows mothers to do.

Following prayer, the Kylie Compassion Award was presented. This award — named after baby Kylie Sprague, who died more than 10 years ago — is in its second annual year; it is given to a nurse who goes above and beyond in the TotalCare Birth Center or neonatal care at LLU Children’s Hospital.

Nurse Tracy Weatherill received the award for 2016 in honor of the exceptional care she provided to baby Lennon Picco and his father, Chris, during Lennon’s brief life in the neonatal ICU.

Through tears, she recounted how much of a privilege it was to care for them. “It truly was one of the most significant moments of my career,” she said.

Chris Picco then shared his story. His wife, Ashley, was 24 weeks pregnant in November 2014 when she unexpectedly passed away in her sleep. Baby Lennon was born by emergency C-section, but he had suffered oxygen loss and only lived for a few days.

A musician, Picco took his guitar to the hospital and played songs for baby Lennon for hours on end; Ashley had always said the baby would kick when music was played. A friend videoed Picco playing and singing “Blackbird” by the Beatles and uploaded it to YouTube so that friends and family could share in Lennon’s brief life. The emotional clip ended up going viral and has more than 18 million views.

One day after this tape was made, Lennon passed away in his daddy’s arms.

Chris Picco said, “My time with Lennon was short, but it changed my life. And it touched many lives, many more than I could ever imagine. I still get messages on a daily basis from people who want to reach out and offer well wishes, prayers, sympathy and to share their own story of loss. It reminds me again of the many things that bring us together, the many things that unite us.”

It is difficult to remember the way life as he knew it suddenly ended, Picco shared.

“But,” he said, “I don’t want to live in fear that at any moment something will trigger a memory. So now I choose to take control of how I remember. Instead of reacting to memories of something terrible that happened, I push forward with memories of a beautiful wife and son that I had the privilege of sharing part of my life with. I move forward creating new memories that will honor them, and live my life fully, which also honors them.”

One way he is doing this is to release an album with songs about the loss of Ashley and Lennon, which he said he prays will give hope and support to others dealing with loss.

Picco then took up his guitar to play and sing one of the songs the album will contain, about baby Lennon. He dedicated the performance to “those who are remembering and the ones we remember.”

Another way Picco has honored Ashley and Lennon is through the creation of Picco Music Academy, a nonprofit dedicated to making learning music fun and accessible for all ages.

After Picco shared his remembrances, each baby represented at the memorial service was also remembered by name in a slideshow. When their baby’s name was projected, family and friends stood to honor the baby, then the mother and father were invited to come to the front and each receive a keepsake.

Moving outside, the service featured a bagpipe rendition of “Amazing Grace” played by Stephen Wilkinson. Released doves in a snow-white flock soared over the large crowd before heading north.

The mourners then also headed north for the walk portion of the event, making a circuit around the lower campus quad. The West family led the procession, in memory of Stacey and Adin. The crowd walked for the steps their babies never got to take. 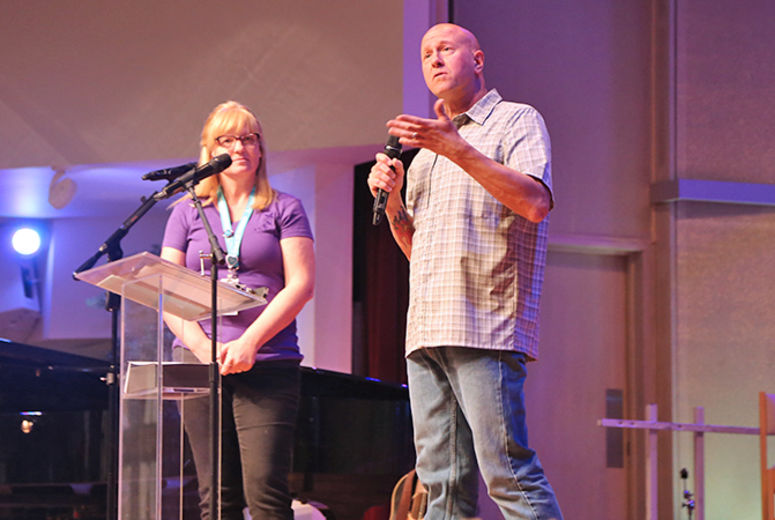 Julie and Brian Cieslak welcomed guests to A Walk to Remember. They lost their baby named Angel in 1998 and now help others going through the same thing. 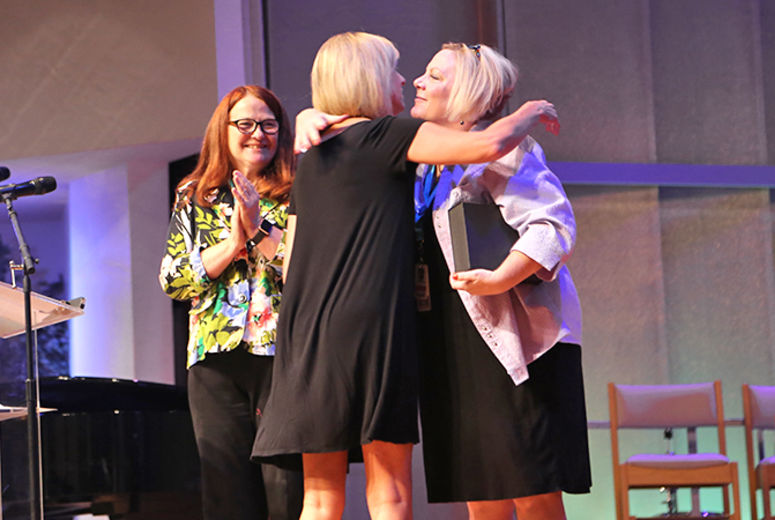 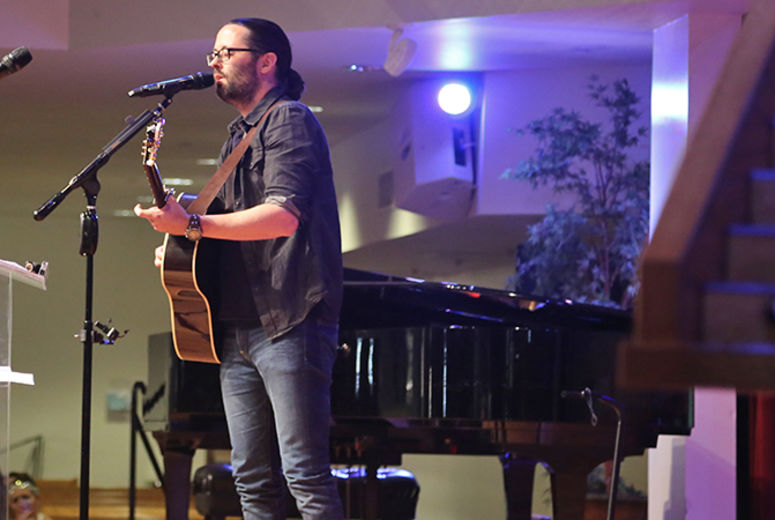 Chris Picco performs a song he wrote in honor of Lennon, the infant son he lost. 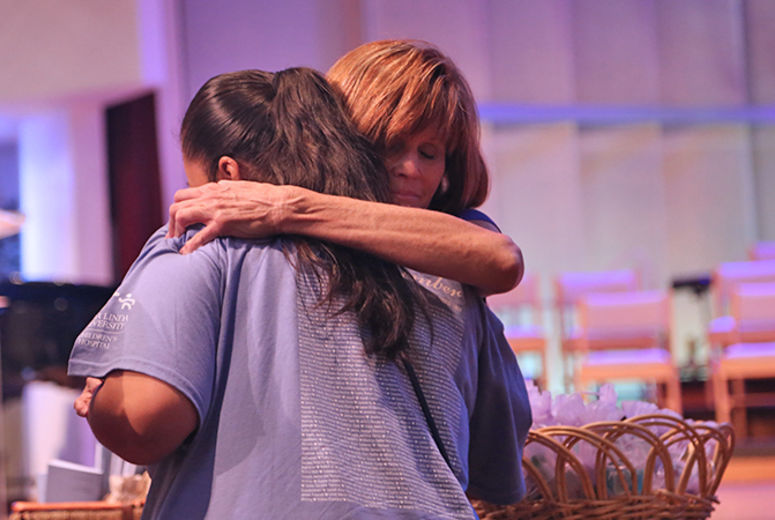 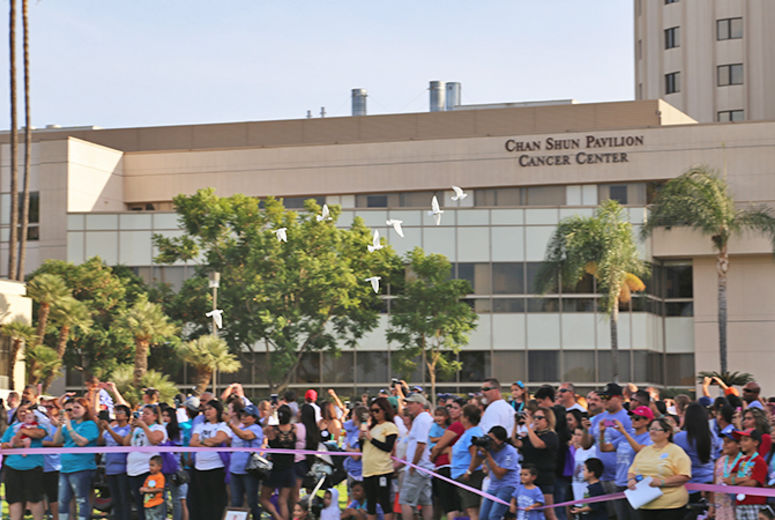 After their ceremonial release, snow-white doves fly over the crowd of mourners. 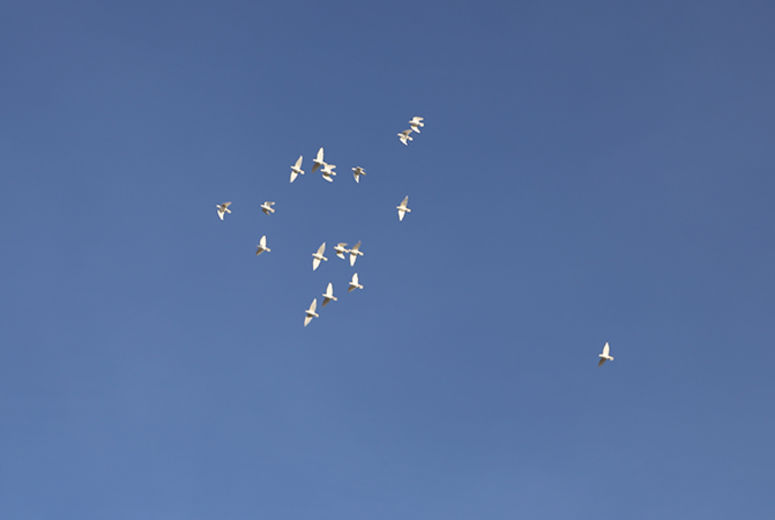 The doves were highlighted against the blue sky even as they flew farther and farther away. 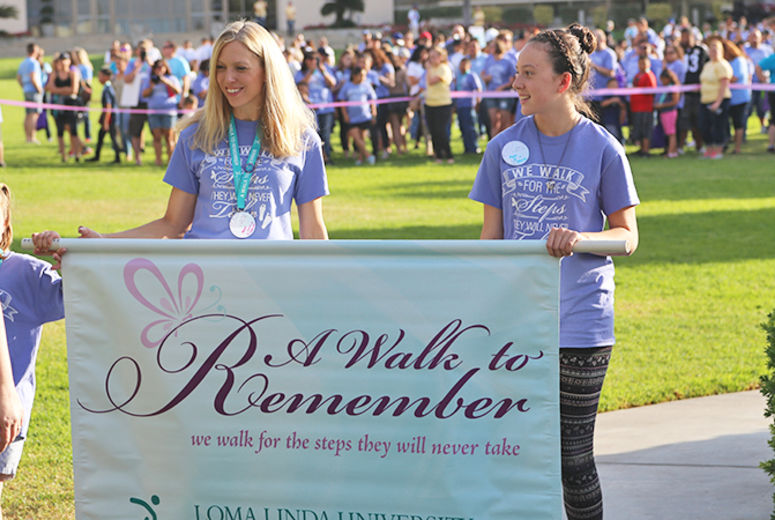 Members of the West family prepare to lead the memorial walk. 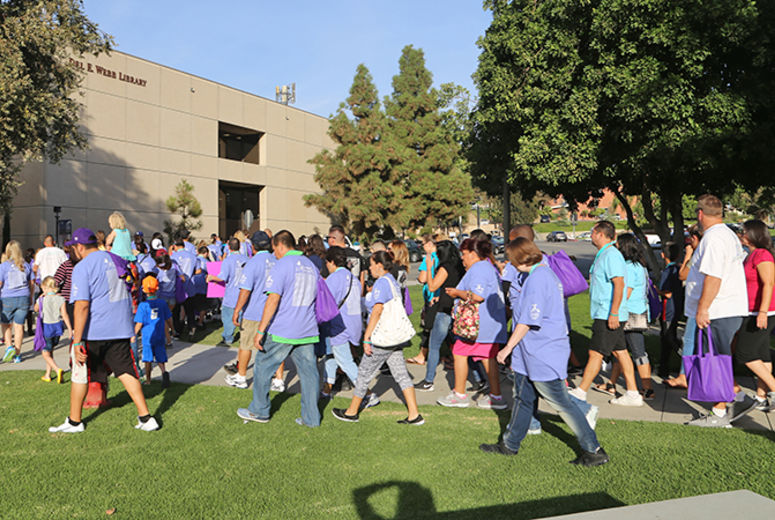 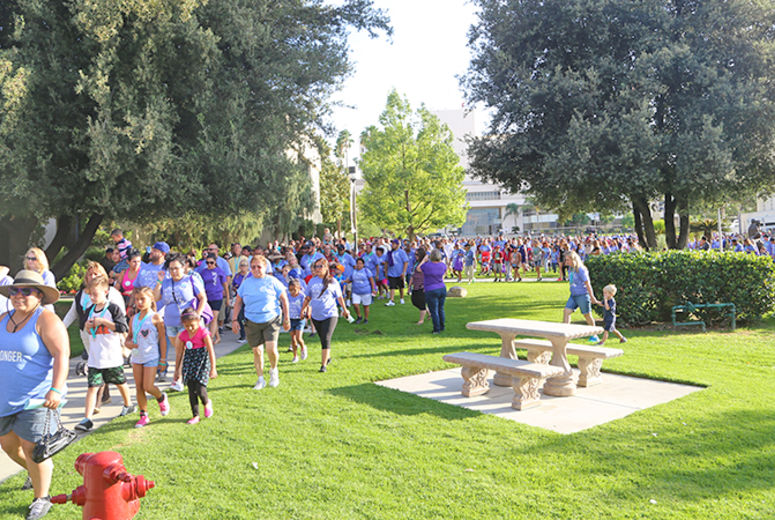 The crowd of walkers stretches into the distance.