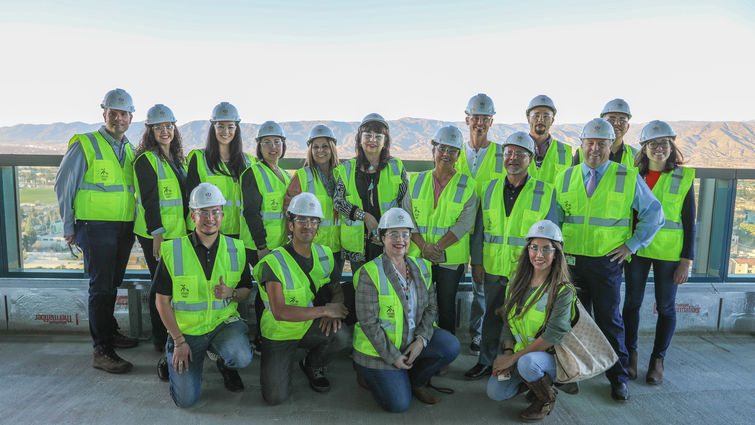 Loma Linda University Health is approximately one year away from opening its future hospital. Along with this exciting expansion of healthcare for the Inland Empire, the opening of the San Manuel Maternity Pavilion inside the new hospital will bring full circle a relationship between Loma Linda University Health and the San Manuel Band of Mission Indians that spans more than a century.

The San Manuel Maternity Pavilion was made possible by the San Manuel Band of Mission Indians, who announced a landmark gift to Loma Linda University Medical Center at the 26th annual Children’s Hospital Foundation Gala in 2019 to support the expansion of this new mother and baby unit.

Loma Linda University Health administration hosted tribal leaders and representatives from the tribe on a special tour of the future hospital construction site on March 3, providing a first look at the pavilion.

“The best relationships are the ones that last the longest, and the San Manuel Band of Mission Indians and Loma Linda University Health have a friendship based on community service that stretches over a century,” said Richard Hart, MD, DrPh, president of Loma Linda University Health. “San Manuel’s support of our new maternity pavilion is a significant addition to the many ways we work together to offer hope to our region’s most vulnerable mothers and children.”

The entire fifth floor of the new hospital will be named the San Manuel Maternity Pavilion in honor of their incredible generosity. This pavilion will allow Loma Linda to continue as the leader in high-risk birth care in the region, with approximately 50% of births at the hospital being high-risk.

During the tour, the tribe visited the basement level, which houses the seismic base isolators that will allow the entire structure to move four feet from side-to-side during major earthquakes. The tribe continued their tour of the fifth floor of the hospital, viewing several areas, including the triage area, birthing rooms and post-partum rooms. The tour ended on the 16th floor of the new adult hospital tower with a picturesque view of the valley below.

Despite challenges faced at the hospital from the COVID-19 pandemic during the past few months, construction has continued without delay.

Check out photos from the visit below.