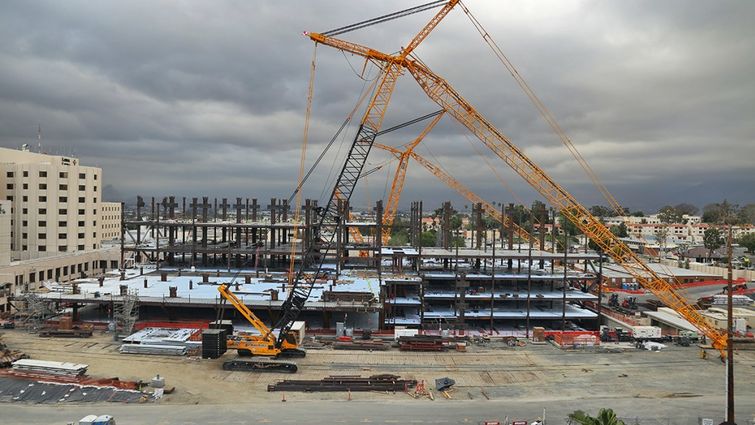 Walk or drive by the Loma Linda University Medical Center and you can clearly see several stories of steel framework rising from the ground. These girders will form the support system of the new Medical Center’s “podium, or base.” The podium will serve as the foundation of the two new towers.

This construction update explains the components of the building’s pedestal or base, and shares some updates about the equipment being used on the site.

We’ll be sharing photographic updates of the hospital construction work on a periodic basis. Watch for special emphasis on some of the behind-the-scenes-views and untold stories. The new hospital is a key part of Vision 2020 – The Campaign for a Whole Tomorrow.

A View from the East (Anderson Street) 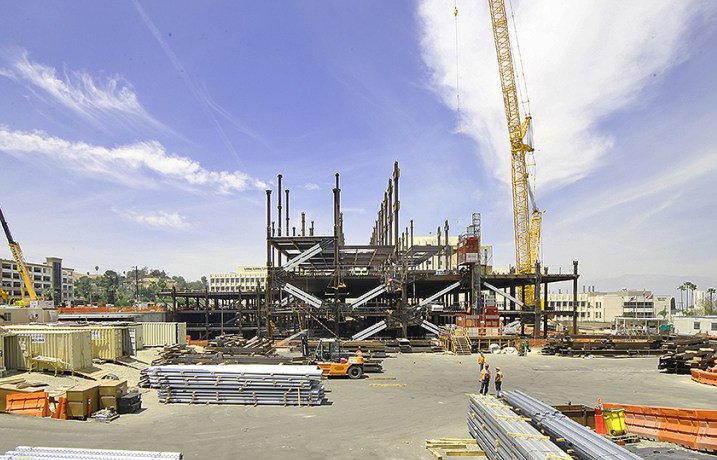 Looking at the project from the east (Anderson Street) side, one can get a good look of what the final product will look like. At the moment all that can be seen are columns and corrugated metal decking that has begun to rise above ground level. 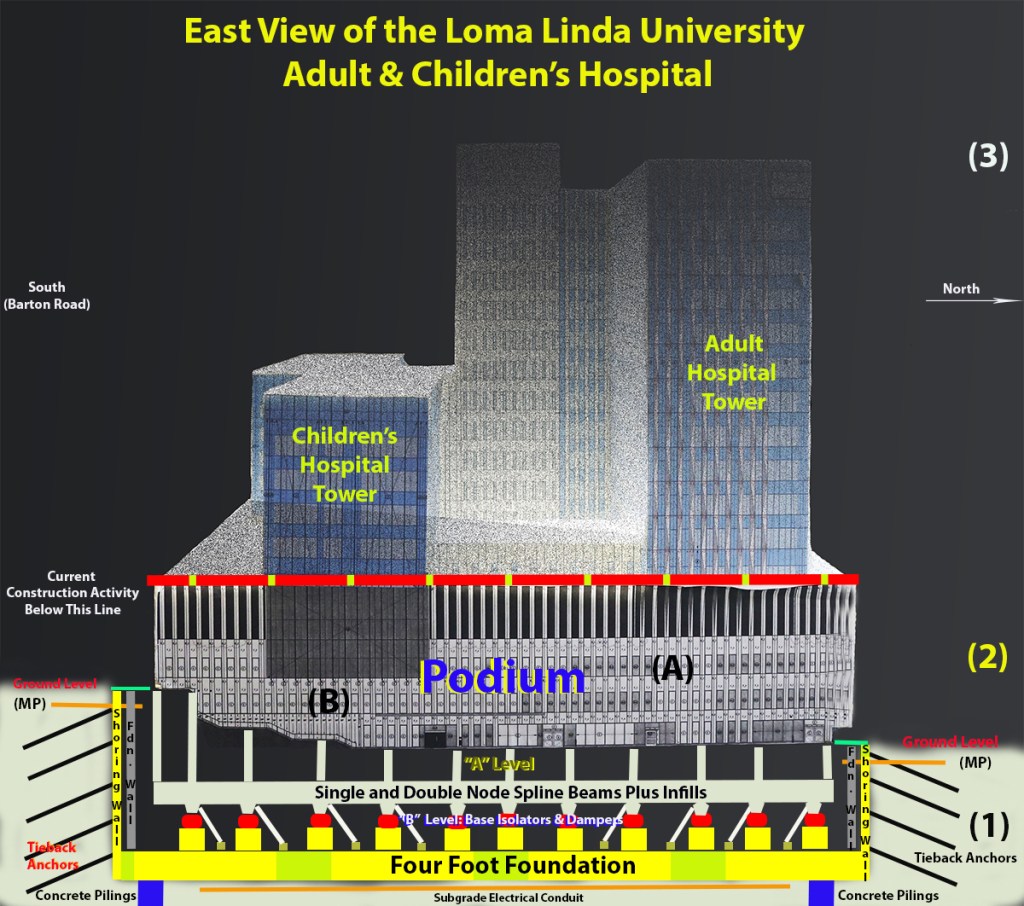 Section one (1) in the above illustration is all under ground and approximately three-quarters of the steel columns, beams, and decking have been installed in the section known as the “Podium” or “Base.” The podium consists of seven floors: two below ground (levels “B” and “A”). Six floors rise above level “B.” Currently, most of the steel columns, infill and decking in section (A) of the Podium is nearing completion with only beams and infill left to reach the roof line of the Podium (see the red line in the above illustration). In section (B) of the above illustration, the steel in the southwest and center south reaches the third-floor. The last and fourth quadrant (the southeast section) has only the decking for “A” level, which covers level “B.” As a side note, the “MP” just under “Ground Level” on each side of the building stands for Mechanical Pipes.

The construction crane we have come to know as “Cheese” has moved on to a new location, the construction site of the new Rams stadium in Inglewood, CA. The original Cheese had the lifting capacity needed to lace the heavy support beams that support the building’s base. Bragg Crane & Rigging Company delivered a replacement crane May 11, a Manitowoc MLC300 crawler crane with 325-feet of boom and 200-tons of counter weights on the south side of the building site. Although the new Cheese has less lifting capacity, the boom is approximately 75-feet taller than the previous crane, and the extra boom height will be needed to raise steel to the upper levels of the two hospital towers. 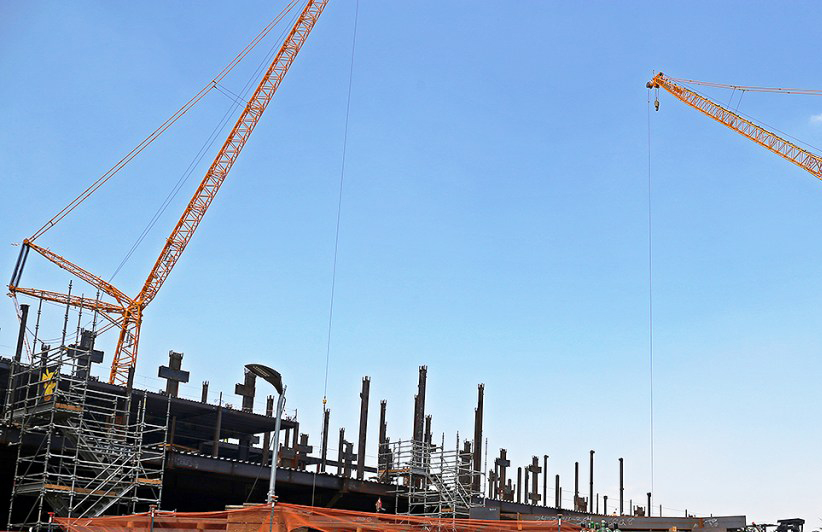 The Manitowoc MLC300 crawler crane stands tall on its first real day on the job.

Below is a view of the site taken on May 11 from the sixth floor of the Parking Structure P4, located south of Barton Road. 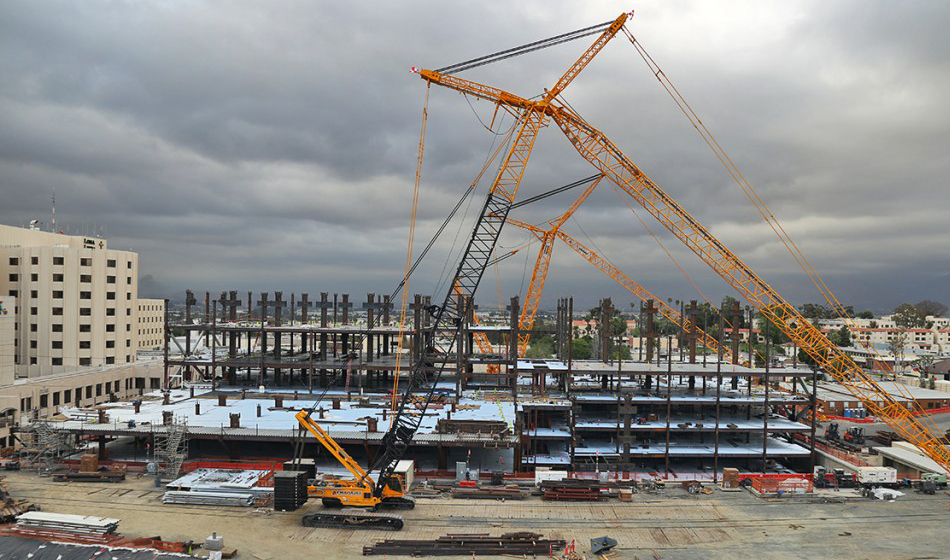