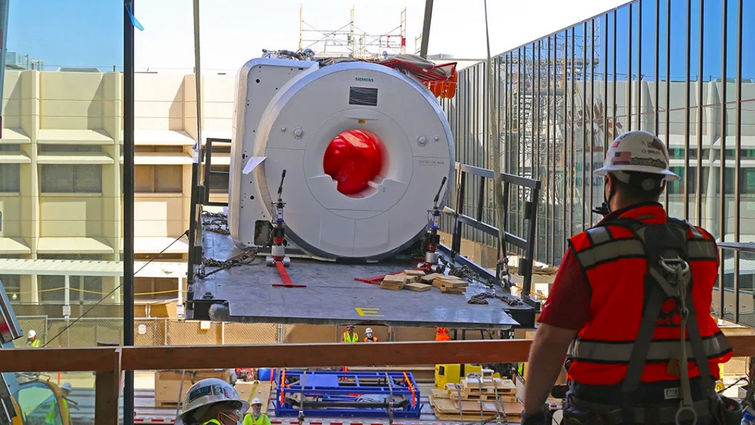 Construction efforts on the new Loma Linda University Adult Hospital reached a major milestone with the installation of two magnetic resonance imaging (MRI) units. The MRIs are the last major pieces to be installed in the new Adult Hospital, bringing the project one step closer to completion.

A 29-member crew completed a carefully coordinated effort to install the units on August 16. Coming on the heels of 10 days of preparation work, the project included removal of a portion of the new facility’s outside wall, and several interior walls to facilitate the movement of the two machines. The MRIs weighed 15,500 pounds and 13,000 pounds.

A giant crane lifted each MRI to the opening created in the outside wall. Workers hand-moved each unit from the lifting platform, and physically moved each MRI along a carefully planned route to their permanent locations.

Because of the weight of two units, special construction techniques were used to prepare for the MRI installation. The two units passed through hallways with structural reinforcement built into the floors to support heavy machinery.

In each MRI suite, construction workers used special fiberglass rebar instead of structural steel in the concrete flooring. The room is also lined with copper, which shields the MRIs from outside magnetic interference, and contains the magnetic field within each unit’s operational room. Hardware in the MRI area such as doorknobs and fasteners must be non-ferrous, and the area has the only wood used in the entire construction project — a soffit surrounding lighting fixtures on the ceiling.

While opening a hole in the hospital’s outside wall might seem strange at this stage of the project, standard building techniques call for the structure’s outside “skin” to be completed as soon as possible. This allows technicians to regulate the interior temperature and airflow. That testing must be completed before the MRI units are installed.

The new hospital building has been designed to ensure future ability to bring in large pieces of equipment as part of the ongoing maintenance plan. Workers can open various spots in floors, walls, and roofs that will facilitate equipment being moved in or out, while the rest of the hospital remains operational.

The new Medical Center will house 320 beds for adult patients, while the new Children’s tower will give Children’s Hospital a total of 343 licensed beds. The new facilities will also be a place where 4,700 Loma Linda University students and 700 residents will progress in their education.

You can also follow the construction progress by following a blog by Loma Linda resident Dennis E. Park, who is documenting the project at www.docuvision2020.com.