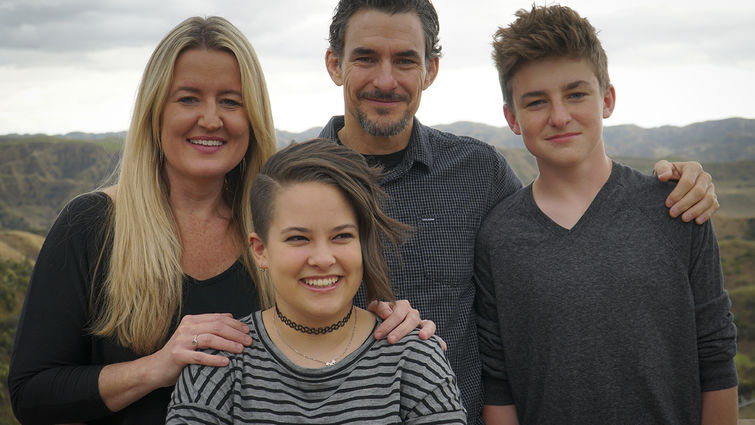 As a third-year medical student at Loma Linda University, Young became aware of a 10-month-old with multiple complex medical issues. Her name was Hanna.

The infant’s parents had been deemed unfit by the state of California, and Hanna was left to endure on-going medical treatment without the love, care and support of an adult.

Between classes and rotations, Young found herself at the foot of the tiny hospital bed — she hoped that her presence would help Hanna heal.

“I would bring her little toys and make her mix tapes to listen to,” Young recalls. “I was totally invested and completely connected.”

During one of her visits, a Child Welfare Service (CWS) representative told Young that after recovery and upon hospital discharge, Hanna would be placed into the foster care system and would require a home equipped to provide care to a medically fragile infant. The CWS representative then asked if Young would consider being the one to provide a foster home for Hanna.

In that moment, she said she felt a flood of emotions. She asked, “How can my husband and I, as students, afford to care for Hanna? Are we ready to foster a medically-fragile child? What if my residency match is out of state?”

The answers to those complicated questions seemed inconsequential after she came to realize Hanna was meant to be her baby.

Once she knew her answer, she thought, “How will I convince my husband?” She immediately arranged for her husband, Justin, to meet Hanna.

In anticipation of their first introduction, the nursing staff dressed Hanna up and decorated her hospital bed. “She looked like an angel,” Young says.

“We were all nervous about how Hanna would react to Justin. Historically she would be upset by interactions with men,” Young says. “But as soon as Hanna saw Justin, she outstretched her little arms to him — she didn’t shed one tear. Needless to say, at that moment, the whole room was in tears!”

A Heart for the Abused and Neglected

Young, knew her career path even at five years old. Her Kindergarten yearbook has the word “pediatrician” under her school photo.

In high school, she learned that a close family member had endured physical and mental abuse from a spouse. “From that point on, I felt convicted to help women and children victimized by abuse and neglect,” Young says.

Sadly, Young says the children who attended the camp would often share stories of physical, mental and sexual abuse. She quickly became familiar with the processes involved in reporting allegations of child abuse and neglect.

“Some kids would arrive at camp with only a throw pillow and a sheet, while others arrived with nothing,” Young says. “Our camp provided summer camp essentials like sleeping bags and bathing suits, which allowed these traumatized children to just be kids for one week of their lives.”

Mending the Past, Healing the Future

Since 2015, Young has worked as medical director of the Children’s Assessment Center in San Bernardino, California.

Established in 1996, as a public/private partnership between San Bernardino County and Loma Linda University Children’s Hospital, the center was established in an effort to reduce trauma to child abuse victims and their families. In 2018, Loma Linda University Health launched its 13th institute, the Resiliency Institute for Childhood Adversity, or “RICA,” as an expansion of the current Children’s Assessment Center.

RICA houses a variety of educational rotations for Loma Linda students and residents, and will be a hub for Loma Linda University Health’s three-year child-abuse pediatrics residency fellowship program — one of only several such fellowships in the nation.

In 2020, a pilot foster care clinic will be housed at the CAC to provide timely, comprehensive, trauma-informed medical care to children who are removed from abusive homes into foster care.

In addition to her role in RICA, Young is as an assistant professor of pediatrics and serves as the fellowship program director for the Child Abuse Pediatric Medicine Fellowship program at Loma Linda University.

After Justin met and spent time with Hanna, the young couple went out to dinner. “My husband was silent,” Young says. “I didn’t know what to think.”

That evening they prayed before retiring to bed, still unsure of their decision. In the middle of the night, they both were awakened by the same thought. She recalls, “We held hands and excitedly jumped up and down — we had made the decision to start our new family!”

It took nearly two years for the couple to transition from foster parents to adoptive parents. Three years later they had a biological son named Noah.

Hanna, now beginning adulthood, has enrolled in a community college to prepare for a career as a child advocacy attorney. She is eager to use her skills in communication to help make a difference in the lives of those who don’t have a voice.

“The health problems faced by children who have suffered high-adverse childhood experiences is probably the number one public health threat in the nation,” Young says. “All the research points to one fact: to make a difference in the lives of these children, they need a caring, supportive adult.”

To learn how to become a foster parent, contact Seneca Family of Agencies SoCal Placement Program at 714-979-2365 or visit their website.

To learn more about how to become a Court Appointed Special Advocate, which involves 40 hours of training and 5-10 hours a month to advocate for a foster youth in court, visit the C.A.S.A of San Bernardino County website.

To learn how to donate to the Children’s Assessment Center, contact Shay Daniel, medical program specialist at 909-382-3528.